Who Needs the Trading Day? I do

Posted by Michael Harris on February 5, 2011

A study last month in the Bespoke blog concluded that the simple strategy of buying on the close and selling on the open of next day would have significantly outperformed buy and hold since the launch of SPY ETF. The Bespoke results were published in several other blogs. According to the study, the simple strategy return would have been 378% as opposed to a return of 193% for the buy and hold strategy. Surprisingly enough, they admitted that the return for buy and hold did not include SPY dividends.  This is a curious assumption but this was not the main problem of the study. The conclusions of that study is an example of how one can be fooled by simplified analysis and extraordinary results.

Before I start I must say that one thing I learned in the last 23 years I have been developing trading systems for qualified traders, corporations and funds is not to trust any analysis, any analysis/backtesting program and any results published anywhere, even in the most prestigious journal. The only results I trust are those I derive myself using realistic assumptions and taking into account all the major factors that can influence the calculations. Having said that, I find not including dividends in the buy and hold return calculations quite unreasonable. Long term buy and hold investors target value and dividends. Before I discuss some more serious issues with the Bespoke study, let us first see how the inclusion of dividends changes the buy and hold return calculated.

The study calculated a buy and hold return of 193%. This would have been the return if someone had bought  and held SPY. This number did not include dividends. The impact of dividends, which is of course substantial, can be estimated fairly accurately by using the adjusted close of January 23, 1993, the day SPY was launched, instead of the actual close. This number can be found here and it is $32.13. The actual close was $43.94. Let us go over the calculations:

Without reinvestment of dividends, the calculation of the return is as follows:

With reinvestment of dividends, the maximum possible return may be approximated as:

Thus, the difference is significant and ranges from 27% up to 100%. But this is not where the problems with the Bespoke study ended. Actually, not accounting for dividends was the least of the problems. The study did not even account for commissions and this is much more important than not including dividends.

Commissions paid per transaction or on a per share basis can significantly impact the profitability of a trading strategy. As a matter of fact, many simple strategies turn quite unprofitable when commissions are included. The material that follows is quite revealing.

Let us first try to reproduce the Bespoke results using their simple strategy of buying SPY on the close and selling on the open of next day. The following graph shows how a $10,000 account would have grown. These results are in agreement with the Bespoke study. The numbers are a bit different because my study included data up to 02/03/2001: 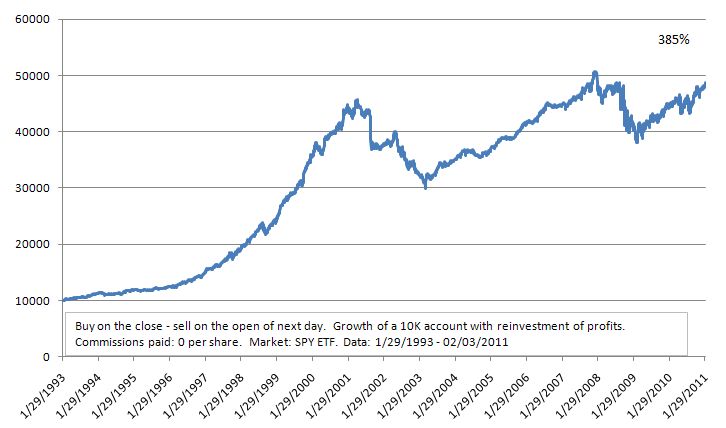 Buy SPY on the close, sell on the next open – No commissions

It may be seen from the above graph that a $10,000 account grew to about $50,000. The actual return was 385%. This was a compound return, meaning that the cumulative equity was used in calculating the number of shares to purchase. Thus the number of shares was not constant but increased or decreased based on available equity.

Now, this is quite interesting. Below is a graph of the equity of a $10,000 account with commission $7 per trade. This is the average commission charged by many retail online brokerages: 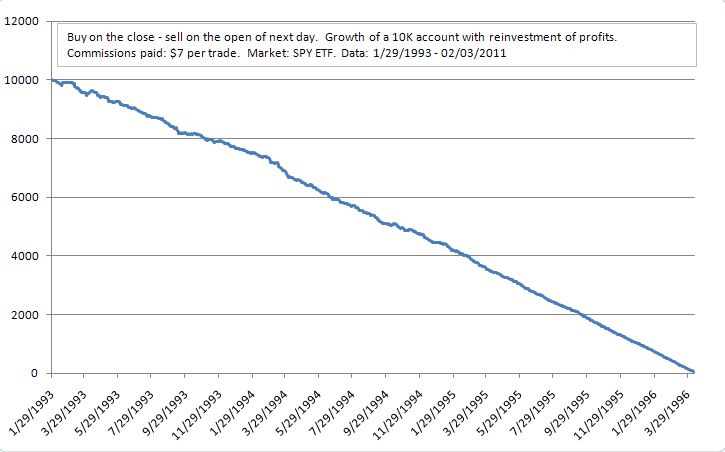 Buy SPY on the close, sell on the next open – $7 commission per trade

Two things: not only the equity dropped straight down on a perfect straight line but the account was totally ruined by 04/08/1996,  almost 3 years after trading began. This happened because, as a general rule, equity growth in stock trading is a function of commission rate and account size. The edge of the simple strategy was very small and when commissions were added it disappeared. This is how naive trading strategies are hit when reality is taken into account.

Below is a table that shows the effect of a $7 commission per trade for various values of starting equity. It may be seen from the table that trader accounts of up to $50,000 were totally ruined. The corresponding date of ruin is also shown:

We may see from the table that an investor with $50,000 in her account paying $7 commission per trade would have lost everything by the middle of March, 2009 following this simple strategy of buying the SPY on the close and selling on the open, when a buy and hold investor would have made a substantial return in contrast. It would take a large starting capital to make respectable returns and overcome the commission wealth-out effect.

At this point someone could argue that $7 per trade is a lot and there are brokerages that charge much lower commission. This is what was done next. A commission rate of 1/2 cent per share was used and the graph below shows the resulting equity curve for $10,000 of starting capital: 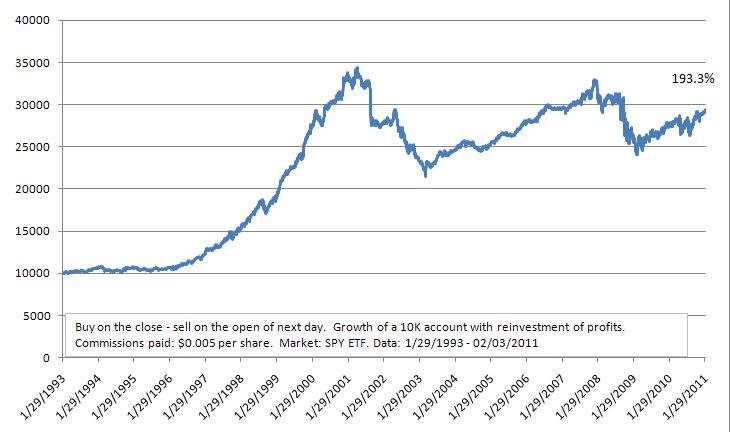 Now, let us come to another point of the Bespoke study. It is true that the simple strategy of buying SPY on the close and selling at the open of the next day would have produce positive returns, depending on commissions and although much lower than the buy and hold strategy, as opposed to the strategy of buying at the open and selling on the close, which would have been a loser but this cannot drive the conclusion that day trading was an inferior strategy. First, day traders do not buy on the open and sell on the close. This is a naive strategy that most traders know it doesn’t work. Intraday traders buy and sell several times during the day based on a variety of methods that are beyond the scope of this article. Second, it just happened that this simple strategy in the Bespoke study worked for SPY. It does not work for other markets and as such it is the result of survivorship bias. There was no basis for choosing this strategy back in 1993.

Edit on 12/20/2015: The link to the Bespoke article is now broken but there is a recent article here by SmartStockCharts

Have a good trading week!