A few posts back I presented a basic introduction to price patterns. This post is an answer to those that claim that price patterns are random formations that fail immediately after they are employed in trading and thus have no value. Some claim that those that use patterns are fooled by randomness. I argue that those who claim that there exist no patterns in chaos are fooled by randomness. Actually, chaos is where all sorts of patterns hide. The ability to find patterns where others see only chaos is attributed to intelligence.

My first book on trading had the title “Short-term Trading With Price Patterns”. In the appendix of the book I listed the exact code of price patterns for various commodities along with precise profit targets and stop-loss values. I have discovered those patterns using a search algorithm that later served as the foundation of a pattern search program I developed for personal and commercial use. 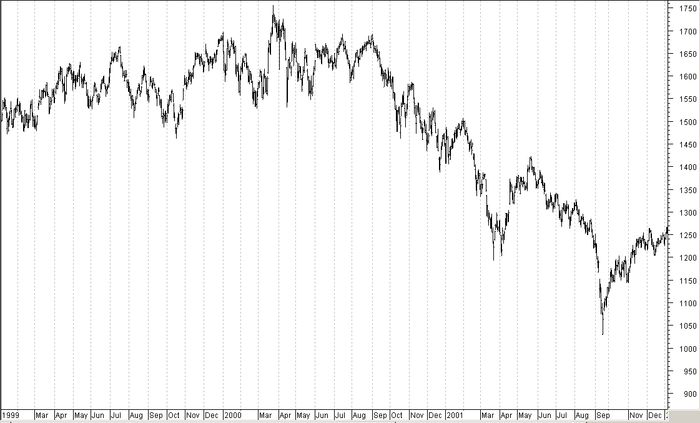 The first backtest I present here is for the 3 years following the publication of my book and the patterns in it because I believe this represents a reasonable time period for out-of-sample testing. Also, this is, in my opinion, the average period after one should expect that any trading system will need some fine-tuning. The results are shown in Table 2 below:

From Table 2 we can see that all the patterns remained profitable, with the third one only having a marginal profit factor. Recall that these are long patterns and the test period was basically a bear market during which long signals are expected to have a rough time. I also combined the patterns in a long-only trading system and the results are shown in the last line. The win rate is 54% and the profit factor is 1.65.

Next, I backtested the three patterns in the period from 01/08/1999 to 12/29/2006. This period included a bear market that ended in the beginning of 2003 and then a bull market. The performance of the patterns is shown in Table 3 below:

The new test period included 5 more years in top of the first test. It may be seen from Table 3 that the profit factor of the first pattern actually increased in this longer period to 2.00 from 1.68. The performance of the second pattern was also positive and only that of the third just broke even. Overall, a system incorporating these patterns yielded a profit factor of 1.3 in a period of 8 years after the patterns were published in my book, which is still a positive return with the first pattern generating twice as much in winners as in losers.

Let us see next how this system has performed from 01/08/1999 to 02/18/2011, a time period spanning more than 12 years after the complete and exact code of the patterns was included in my book. The results are shown in Table 4 below:

It may be seen from the table that the first pattern retained its profitability with its profit factor slightly increasing to 2.06. The remaining two patterns turned unprofitable and the combined system was marginally unprofitable, with a profit factor of 0.93. It is important to realize that it took about 12 years for the combined system to lose its profitability although in the original search period it had only 27 trades and in the 12-year test period that followed 39 trades.

Certainly, no one should expect price patterns to remain profitable for ever. The objective of this study was to show that there are patterns that remain profitable for extended periods of time.  There is order hidden in chaos and those that believe otherwise are just fooled by randomness. However, finding such patterns is not a trivial job. The hardest job is selecting patterns that have high probability of remaining robust for extended periods of time from a group of candidates. Even harder is the task of designing an algorithm for discovering candidate patterns that minimizes data-mining and data snooping bias. The real value is not in the patterns but in the algorithm because systems based on such patterns must be fine-tuned every 2 or 3 years. Thus, the value of trading systems comes from the process that developes them rather than from the systems themselves. Systems come and go but processes that find systems survive.

DLPAL  is a software program that among other things, automatically discovers price patterns that fulfill user-defined performance parameters and risk/reward statistics by searching historical daily and intraday data in a fully automated way. DLPAL can discover both regular and delay patterns, with a delay up to 5 bars and also determines the optimum value for the delay, in bars.