In the recent past classical chart analysis has produced some major failures, including that of the notorious complex top in bonds in the beginning of 2012 that failed miserably, causing devastation to bond bears and another blow to this ambiguous practice. There is another challenge to this very old practice of analyzing the markets now and it is a tilted head and shoulders complex top again in bonds. Prices have broken to the downside already but the question is whether they will make it to the price target. 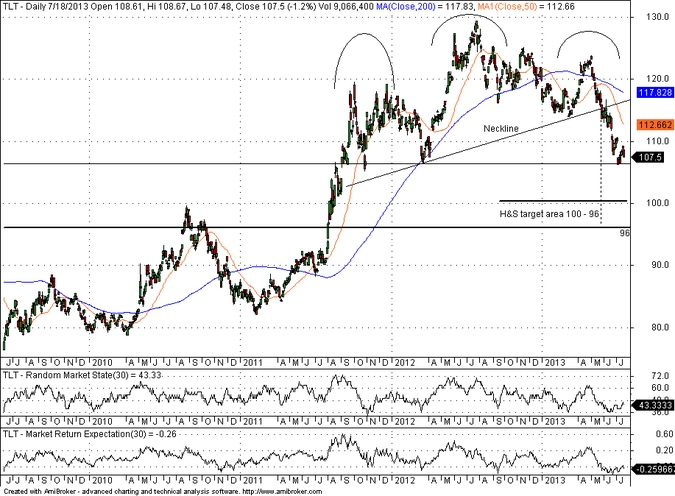 According to some analysts, tilted head and shoulders tops of this kind are strong signals and TLT prices have broken to the downside already during the first week of June and then found support near the March 2012 lows. The issue is whether the target of the complex tilted head and shoulders top shown on the above chart that I estimate to be in the 100 – 96 area will be reached or it is somewhere around here that another bond bear massacre will commence. It is true that this time around things are much different and the market consensus is bearish but this is what worries me. Too much negativity in the bond market and many looking towards a 4% target for the 10-year yield may drive an opposite reaction and an eventual failure of this classical pattern.

This time around in bonds everything goes for classical technical analysis and the conditions are there for this complex head and shoulders top to reach its target beyond the obvious support near the March 2012 low and much closer to the October 2010 top. If this pattern fails, it will be another indication that something is definitively wrong with classical chart patterns. We will know by the end of this year possibly.