Sell In August and Go Away? Bayes’ Rule Says The Odds Are in Your Favor

You are a fund manager and you are making a 30% return for the year just by employing a naive golden cross trend-following strategy. You know that if a correction begins now, maybe up to 7% or even more may be lost. What do you do? Do you stay in and ride the market according to the system rules or do you take the money and run, and thus risking underperforming the index if stocks continue going up?

Based on the open of SPY on January 2 of this year, as of the close of Friday your fund is making close to 19%, with a -5.55% maximum drawdown by riding the trend based on a 50-200 golden cross system: 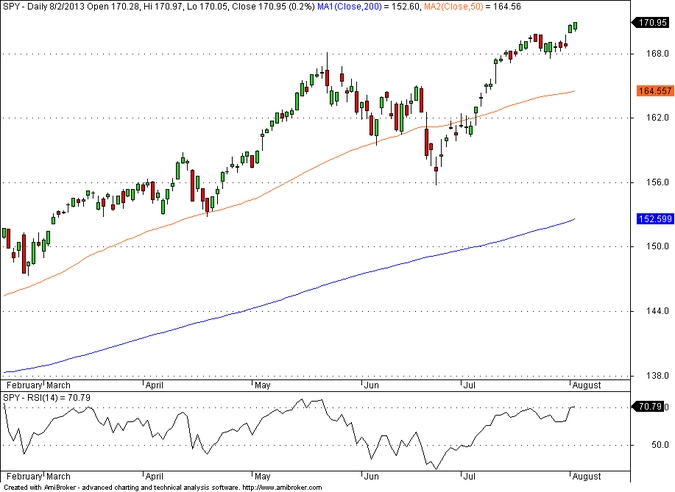 You know that this system is not intelligent because you have done your homework but you follow it in lieu of something better. You know that if a correction starts the losses will accumulate fast and by the time you get an exit signal nearly half of the gains may be wiped out. You decide to employ Bayes’ rule as follows:

Therefore, the probability the market gains more than 20% this year given that it is already up is about 0.36 based on historical data.

At the same time, you know how harshly the media treats those managers who underperform the index. You often complain the way these reporters and bloggers who have never traded and have never been under the emotional pressure of risking actual money in the markets, especially client’s money, treat fund managers who underperform the market. You however think 20% is already a high return and only a greedy individual will ask for more. You decide to sell and secure the 20% gain given that the odds are in your favor according to Bayes’ rule.

I agree with you. Let the reporters scream and the greedy customers redeem if the market gains more. You have done the right thing, risk and probability wise.