Maybe this is one of the best kept secrets in Wall Street, exposed today to the readers of this blog. To make a long story short, although the YTD return of AAPL is about -5% when adjusted for dividends, buying the stock at the close of January 2, 2013, then selling it at the next open and repeating this at every close and following open has generated a gain of 14%. In short, if someone did this his shares worth about $626.43, instead of $496.04, as of the close of yesterday. 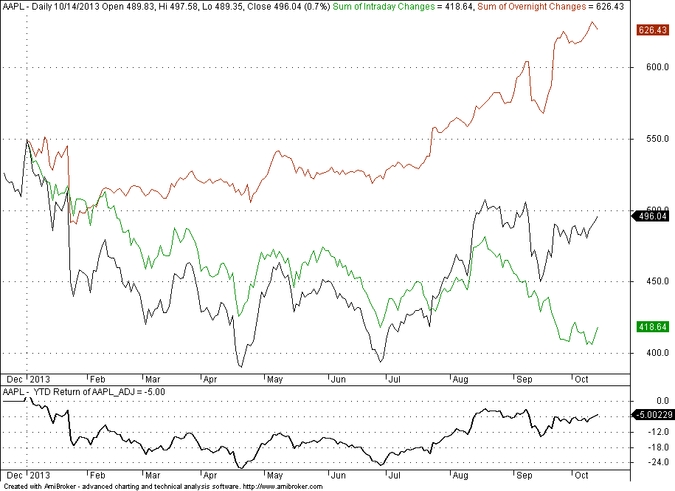 On the above chart the black line shows the unadjusted price of AAPL since the start of this year. The red line shows the value of an account that bought one AAPL share at the close of January 2, 2013 at $549.03, if that share was sold at the next open, then bought again at the following close, then sold again at the next open, and so on. In other words, the red line shows the growth of overnight changes of AAPL plus initial price. The green line shows the growth of intraday changes plus initial price. Note that the sum of the overnight and intraday changes minus twice the closing value of the stock on 01/02/2013 (initial price) should equal the net change in the stock YTD, or,

If we substitute the values from the above chart we have:

The above result is obvious if one realizes that by adding the two series, the overnight and intraday, all intermediate terms are cancelled and what remains is twice the starting price plus the net change in the stock in the period under study.

The return of an account trading round lots of AAPL  (low commissions apply in this case) would need a maximum of $549.03 per share to start with because that was the maximum price for this year so far. The return per share when accumulating the overnight changes (before commissions) is calculated as follows:

Commissions and slippage could reduce this return by as much as 1% – 2%. Yet, this return is spectacular when compared to the -5% return based on adjusted data and shown on the bottom chart pane. The total gain is more than 17% or better.

And yes, this has not happened only with AAPL. But in this particular case the divergence between the buy and hold and playing the overnight game is huge and possibly one of the best kept secrets on Wall Street, until now…