A massive head and shoulders top in GOOG has compelled many naive chartists to short the stock in anticipation of a huge down move. Instead, a huge up move took place on Friday crashing the dreams and hopes of those who continue to trade the markets using methods developed in the early 1900s.  This latest failure of a flagship pattern of traditional chart analysis adds to the high number of recent failures and it is another strong indication that this is a market ruled by algorithmic trading.

The $87.79 dollar opening gap was a shock to many. Some margin accounts, primarily of small speculators hoping and dreaming to make it big were liquidated right at the open. Cash account holders scrambled to sell and get out. Some brave ones averaged up only to cover during the day. Anyone who believes that visual charting will make money soon faces reality. This is an algo world. 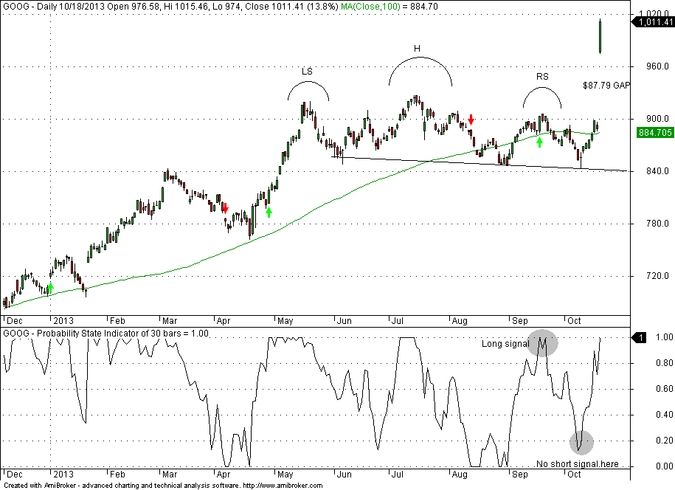 The head and shoulders pattern is indicated on the above chart. I have argued many times in numerous posts in this blog that these patterns no longer carry any significance. They can be either continuation or reversal formations. The chances are 50/50. The algos decide which directions the market will take, not the patterns.

I must mention that some very experiences chartists who have realized the potential dangers of these patterns have argued that shorts should be initiated only if the price closes below $847, the low of August 30. However, although this approach might have worked in this case to prevent disaster  it does not always work because of false breakouts. Actually, in this case also the chances are 50/50.

On the other hand, algorithmic methods for trading the market, like the Probability State Indicator, generated a long signal in GOOG on September 18 which was still open on Friday and thus took advantage of the gap, as shown on the lower pane of the above chart. Below is a backtest of a system that goes long when the PSI(30) is 0.95 and exits when it is 0.05 (100K starting capital):

The Amibroker backtest since the start of this year shows that the return of this market timing algo is 37.64% as of the close of Friday, as opposed to a buy and hold return of about 43%.  The green arrows indicate the long entries and the red arrows the corresponding exits. The last long position is still open.