Successful speculators search for bubble opportunities while the unsuccessful ones complain about them and stay on the sidelines. Bubbles operate as wealth transfer mechanisms from those that join the game late – usually bears who give up and morph into bulls – to those who cause the bubbles to form in the first place.

A bubble market is a great opportunity to profit. The rest, like the economic, political or even social issues, are only relevant to those who do not understand how markets operate. I learned this lesson the hard way in 1998 when I decided that the stock market was a bubble and I stayed on the sidelines. Thankfully I did not go short because I am against using a margin account anyway.  But I watched the market going up 50% while my cash was losing its purchasing power. Finally the bubble burst came. Was I vindicated? Theoretically I was but in practice I lost a lot.

I believe we are at a similar situation at this point. I have no idea how close to the top we are. I suspect maybe two or three months but I may be way off because nobody knows when the top will form. This talk in the media about a bubble market is nonsense. Nonsense are also all the arguments trying to prove this is not a bubble. The experienced traders and investors do not care about nonsense. The real issues are how much to invest and when to pull the stop trigger. That is all. The rest is for those who are still learning, like I was in 1998. The newsmedia, for example, is in a perpetual state of learning. 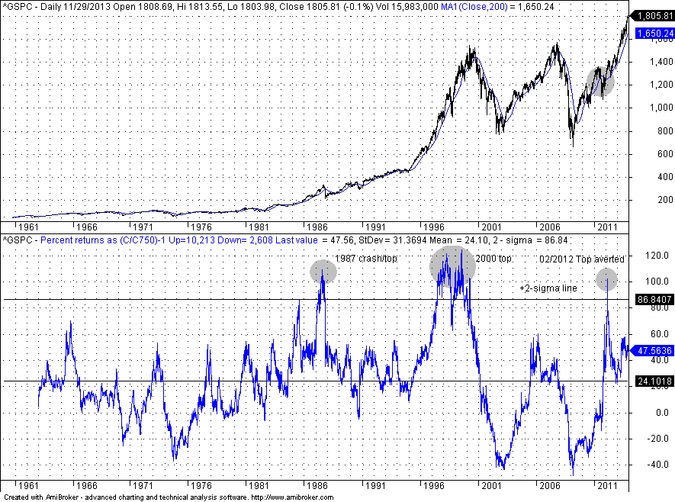 On the above S&P 500 index daily chart since 1960, the bottom pane plots the rolling 750-day (nearly 3 years) arithmetic return of closing prices. The average and 2-sigma lines are also plotted. The following observations can be made:

Recall that arithmetic averages of returns are unbiased estimators of the return. However, the arithmetic average turns out to be too optimistic because of the volatility of returns and thus the probability of achieving it is very low. This is part of the dynamics of bubble formation and bursting. When investors realize that expectations are too high, they pull the trigger and get out. This process of high expectations is now in place, almost after 5 years from the 2009 bottom. Where were those who just came out to convince us that the market is not a bubble during the period 2009 – 2012? When I was arguing that investors should fasten their seatbelts or that bears will get crashed I was getting nasty remarks in the social media.

The important issues for those who understand this game is how much to invest and when to get out. The rest is nonsense. Yes, we are probably in some stage of a bubble formation that will be declared to be such only in hindsight. If there is a spike in the 750-day return above the 2-sigma line, then that could be an indication of a top. But this may be a sufficient but not necessary condition, as the 2007 case shows. In the markets, necessary and sufficient conditions are rarely established. Otherwise, the markets would be tautologies and profiting from them would be impossible. There are two basic logical methods to approach markets; inductions and implications (There is a third that is complicated and beyond the scope of this article). Induction is probability and given the limited samples it suffers from significance issues. Implications are plagued by the paradox that when we say p implies q, this statement is true when q is true and p is either true or false, which is the notorious paradox of material implication. For example, the statement

If there are unicorns, then Central Park is in New York

is always true, regardless of whether there are actually unicorns. (Doesn’t this sound like some technical analysis articles you read now and then?) I hope that the readers of this blog not familiar with this paradox will get to understand its significance and relation to trading and investing.

The conclusion is that both approaches for making decisions about the markets, the inductive and deductive (implication) are problematic and involve high risk. The rest is nonsense, like talking about bubbles.