Some charlatans pose as technical analysts or even quants. A frequent narrative these charlatans use involves a rise in stocks and they justify it with some trivial analysis. They should be telling us instead when the market will fall, not when it will rise. Then, we will know if they know anything. Read below why.

Below is a chart for the daily timeframe with data for all other timeframes mentioned: 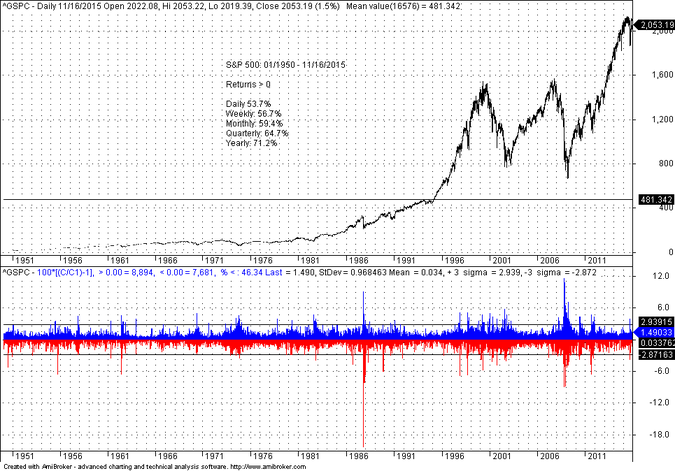 Therefore, if someone claims that the market will go up in some timeframe and does that very frequently while justifying that using some trivial but dubious analysis, then the odds that this charlatan will be correct on average are given by:

where p is the probability of success.

The table below shows data for the various time frames mentioned:

It is clear from the above table that for the stock market, the odds of a gain in any timeframe listed are in favor of charlatan analysts. We are not talking only about charlatans who pose as technical analysts in front of a crowd of uninformed individuals that never take the time to do a simple statistical analysis of this sort. We are also talking about highly paid professional analysts who every quarter, or year, claim that the market will go up when they know the odds are overwhelmingly in their favor.

Therefore, if the odds are in favor of up moves in these timeframes, we can only judge the abilities of an analyst when there is a solid track record of forecasting correctly down moves, where the odds are against him. I do not need anyone to tell me that the market will go up tomorrow, next week, or next year because I know that the probability of that is higher. I need someone to tell me when to protect my capital by selling and then taking advantage of the longer-term bias by buying at lower prices. This is the key to stock market investing success. I do not see many analysts being successful in doing this in the longer term. Some, who in the past succeeded in forecasting a market crash, failed miserably with successive trials. The market can fool even the smartest analyst. This is one reason that the market has survived for so long and has reached new highs while some analysts have changed professions after reaching new lows.

The conclusion from the above analysis is that when you hear an analyst claiming that the market will go up tomorrow, next week, next month, or even this or next year, and presents for that some trivial explanation that is not based on sound statistics or a validated model, then it is possible that he is a charlatan that tries to build a carrier by taking advantage of the structural upward bias in the stock market.