When Did The Bull Market Begin?

Permabears complain constantly in social media that this is the longest bull market in stocks for over six years. This is a way of justifying their wishful thinking. When did the bull market really begin? Let us think about it. 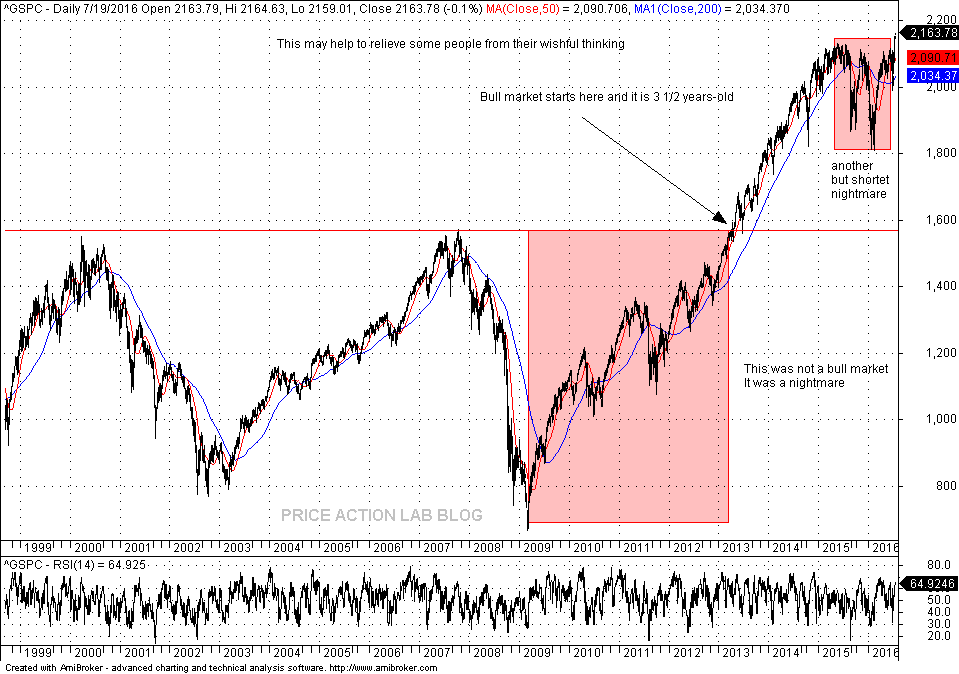 After the bottom of 2009 the market struggled to regain its 2007 highs. There were two major corrections in 2010 and 2011 and considerable chop in 2012. Most equity trend followers experienced substantial losses; hedge funds went out of business. Many economists were expecting inflation, higher yields and lower stock prices. The rebound from the bottom of 2009 to the end of 2012 was more of a nightmare market for most investors and traders and very far from a bull market. Taking just the end points from the bottom of 2009 to the high of 2012 and claiming that that was a bull market is a chart illusion.

The true bull market started in 2013 when it was evident that quantitative easing will not cause the hyperinflation permabears were expecting and that the Fed has instituted a “put” for investors. That bull market paused in mid 2015 due to interest rate uncertainty and other risks related to politics and geopolitics.

The market is now attempting to restart the bull move. No one knows if this will succeed. Permabears resist, claiming that this is already a bull market for more than six year and must correct. That is really an effort to justify wishful thinking. While no one knows the future course of the market, the efforts of some permabears are entertaining. At the same time, they enjoy many click and likes from the “permabear society” that follows them.