Changes in Relative Strength Index (RSI) have low correlation with changes in price for timeframes longer than two days. This relationship is highly robust for four major ETFs. The conclusion is that only very short-term traders should look at the RSI.

Position traders, trend-followers and longer-term investors should not pay attention to RSI indicator. This indicator has some limited value only for very short-term traders and speculators. Actually, since the RSI is a short-term momentum indicator, its use for overbought and oversold indicator makes sense in the context of gambler’s fallacy. Specifically, short-term traders expect a reversal in prices when the RSI indicator, usually calculated over a period of 14 days, moves above 70 or below 30. This works at times but it only takes one or two days of a reversal to work off overbought/oversold conditions. Therefore, use of the RSI indicator makes sense only in the case of short-term speculators.

The chart below shows the correlation of changes of the RSI(14) with price differences for timeframes of 1 to 7 days in the case of SPY. For example, for 1-day timeframes, the correlation is between the change of RSI(14) value from the previous day and the first different is price (Close – close of yesterday.) 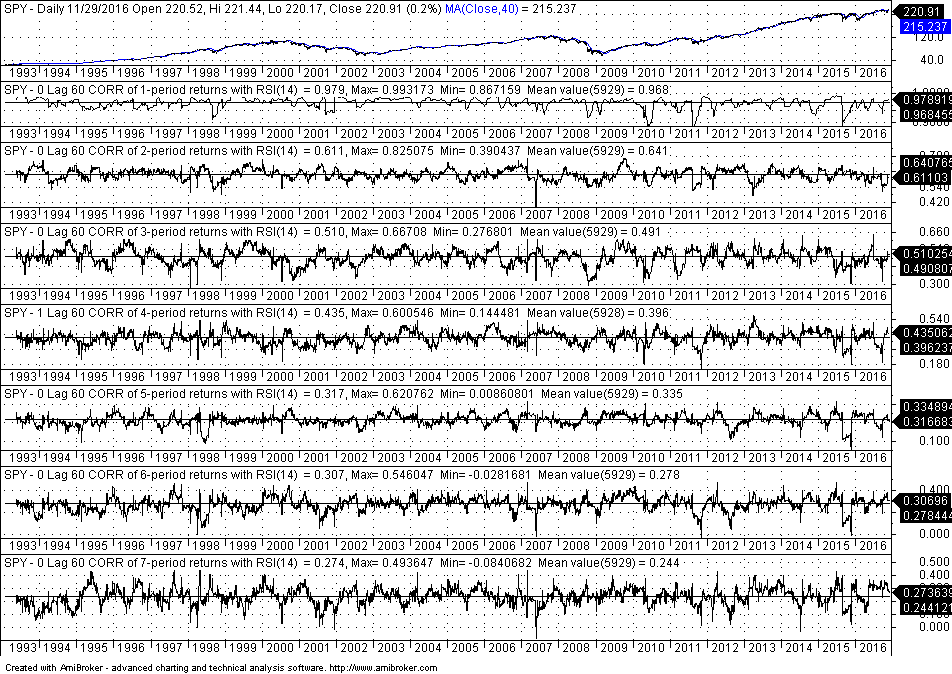 It may be seen from the above chart that the mean value of the correlation is steadily decreasing as the timeframe increases. The same is true for IWM, GLD and TLT, as shown in the charts below (click images to enlarge.)

It is interesting that the mean correlation is extremely robust over all four ETFs, as shown in the table below:

It may be seen from the above table that there are minor deviations in the correlations for the four major ETFs and mostly in higher timeframes.

It is also interesting to look at the minimum correlation in different timeframes, as shown in the table below:

Again, the pattern of minimum correlations is robust and reveals the important result that RSI changes are little correlated to price changes after the second day and the correlation vanishes after the fourth day to become negative after the sixth day. Oversold/overbought conditions, in the gambler’s fallacy sense of a reversal, are valid only for one day into the future and after that memory decays fast. Therefore, the RSI indicator has some value only for very short-term speculation with a maximum timeframe of two days. Beyond that, the indicator loses its memory of price changes.

Note that the same behavior is noticed when the RSI period decreases from 14 all the way down to 2. However, the 1-day correlation, which is considered the base correlation, decreases. Below is a chart for RSI(2) in the case of SPY: 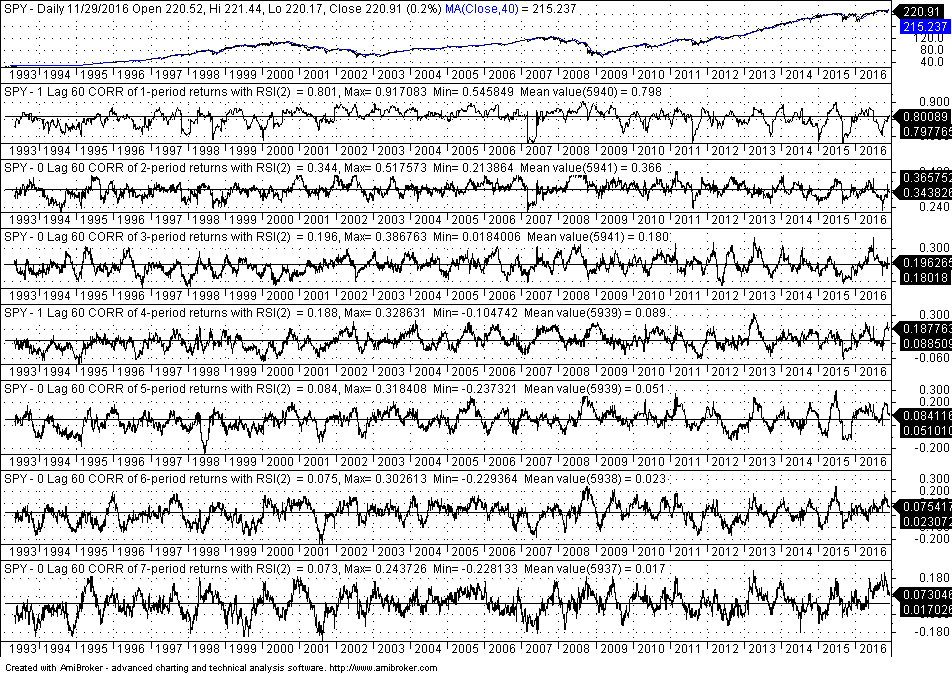 The conclusion is that the RSI indicator is a very short-term indicator and position, medium-term and especially longer-term traders should ignore it and especially discount any hype in financial media based on overbought/oversold conditions.