Why So Many Overestimate Their Technical Analysis Skills

After following closely technical analysis articles and social media posts in the last 8 years after the March 2009 bottom, I have come to the conclusion that the bears of the early stages of the stock market recovery are now the vivid bulls and the old bulls are now in the best case skeptical if not bears.

There were many articles from 2010 and 2011 by angry bears after two failed death crosses and expectations of a major top and return to 2009 lows. The bears believed the high profile economists who thought quantitative easing will lead to hyperinflation. Any technical analysis they used was in an effort to confirm this bias. I remember a friend in fund management was paying thousands every month to some analysis firm for crappy forecasts of a surge in inflation and the demise of the stock market. He now regrets he did not invest the money in the market.

But why do so many use simple technical analysis that no longer works? The answer is maybe simple: the analysis tools are easy to understand, use and are accessible by anyone. The result is noise. Most use technical analysis to justify their own biases and are the victims of selective perception, which is the dangerous tendency to perceive what one wants to, when analyzing information. There are always exceptions to this. 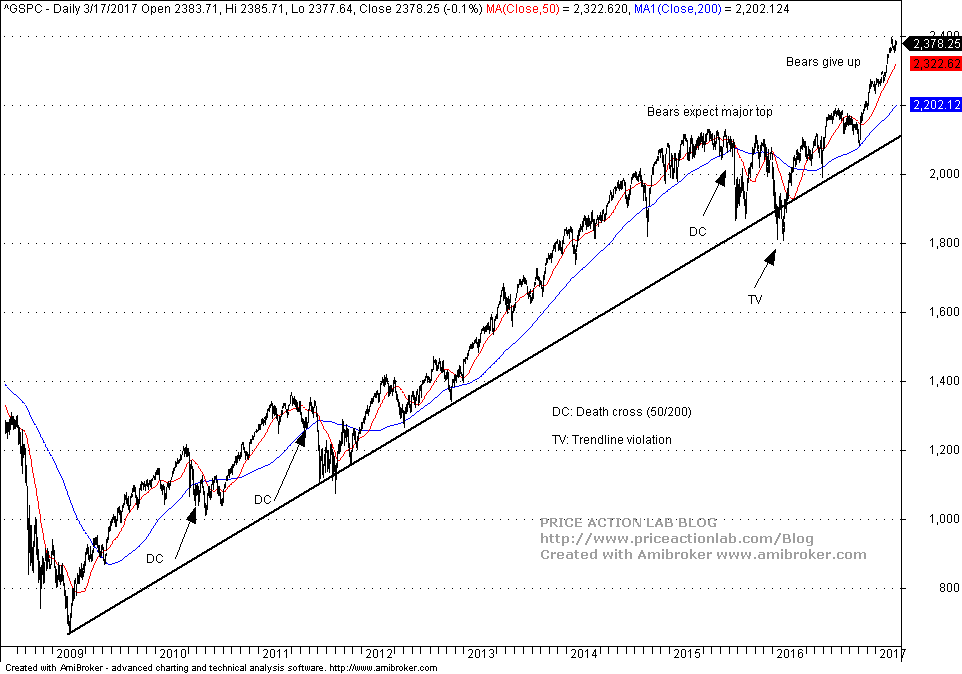 I remember some analysts declaring the rebound dead after the two DC points. Most bears came out of closets during that period because there were overconfident about their skills and kept forecasting a crash until the end of 2015. “Peak bear” came with the failed 2015 death cross and the TV major trendline violation failure.

After 2015 we have the interesting phenomenon of many bears becoming bulls while using the exact same technical analysis as before to now forecast a bull market continuation.

A cognitive bias that plays major role in contrarian behavior is a variation of Reactance, i.e., the desire to be different in order to prove something. This has worked well on occasions for some individuals that became famous for predicting crashes but their subsequent predictions failed miserably. However, in the meantime, these individuals enjoyed high positions and large rewards for just being lucky. Unfortunately, our society rewards luck more than skill. This is evident beyond doubt from lottery jackpots. Our society is “lottery-based.” Some in the financial field have realized that and take their chances. But in the case of bears during 2010 and 2011 this did not work out well. They took their chances and did not make it. It is a game: usually when you hear an extraordinary forecast, there is someone behind it who rolls dice in an effort to make it big. These people belong to casinos, not to markets.

As we transition to the next level of technical analysis that is more quantitative and bot-oriented, we may see more swings of the old types from bull to bear and vice versa. Technical analysis is advancing and requires more computing power and math skills. Drawing lines on charts and looking for simple patterns no longer works. More details about this this may be found in my interview for Forbes by John Navin.

All charts were created with Amibroker – advanced charting and technical analysis software. http://www.amibroker.com