Social media facilitates widespread dissemination of information and assists in the market discounting all publicly available information. The result is that the upward drift due to dividends dominates in the longer-term and bear markets can only occur due to a black swan that is not discounted.

I wrote that after finally blocking a financial website that has written an incredible number of bearish articles about the stock market since 2010 and each and every time proven wrong. Actually, due to the large audience they have contributed to a discounting of each and every potential cause of a bear market they have ever published, including technical and fundamental factors.

This happens because the market is an efficient discounting mechanism. If some people think the market will fall in a month or so and go short now in a hurry, others may think it will continue rising and unless the timing of the short positions is nearly exact, they end up getting squeezed out and this creates more upward pressure. Similarly, if many people think the market will rally, they cause prices to overextend, as it happened earlier this year, and arbitrageurs come in and cause mean-reversion. In the long run, these random actions amount to a zero-sum game before friction along an uptrend and the markets rises due to a strong bias caused by earnings growth and dividends.

In a recent article I showed that dividend reinvestment is responsible for more than 40% of annualized return of SPY ETF since inception. Here is the chart: 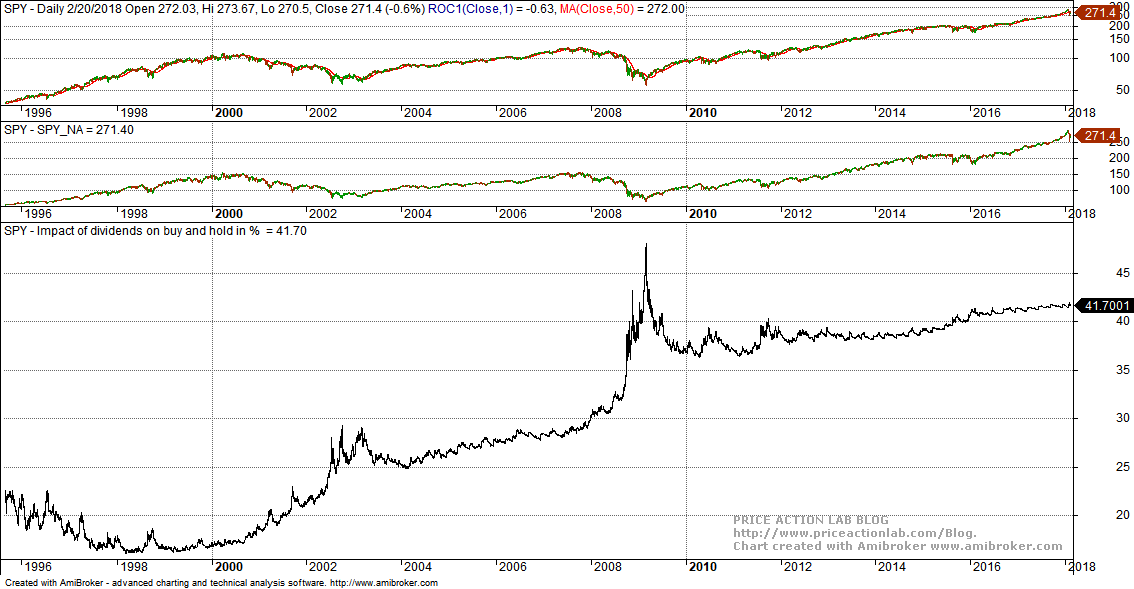 The dividend reinvestment is the most powerful driver of stock market uptrend. This is the upward drift that remains in place after all random actions of investors and traders wash out in the zero-sum game facilitated by the market discounting mechanism. Of course, some traders and investors are better than others and some even consistently so, but the expectation (mean) of the game before dividends are taken into account is zero. In other words, if companies would stop paying dividends, stock market investing would become similar to futures trading where the expectation (mean of distribution of counter-party returns) is zero before friction by virtue of the mechanics of the market.

If someone believes there is a fundamental or technical reason for the market to rise or fall it is silly to disclose it in financial media or in one of those social investing sites. The ultimate contribution of these websites, even if unintentional,  is to make sure that inflows to passive investing funds keep coming by discounting every possible information that could lead to a bear market. Of course, they were not successful in the 2008 financial crisis because this was due to a black swan and they will fail in the next one too but in the meantime, the ultimate beneficiaries are the passive funds and “do nothing” managers with high salaries and not the short-term or positions traders in the stock market, as a group, because as already mentioned that is a zero-sum game before friction (commission, slippage, taxes, etc.).