When trend-following models break down, trend followers can only blame their skill and ability. On the other hand, when prices fall hard, buy and holders blame the markets. These facts provide some indication about the future course of the stock market in a highly controlled environment.

Both trend followers and buy and holders are speculators and in fact both make forecasts about the future direction of markets, although the latter never admit it and the former occasionally deny it. However, the skills of trend followers are always under questioning where no one is ever talking about skill of buy and hold.

The main reason for the above facts is that both investment styles are often misrepresented to the public: trend-followers insist they do not make forecasts to look more like buy and hold and buy and hold passive investors never admit to time the markets, the sort of thing they blame trend-followers of doing.

The key argument in this brief article is that at the end of the day, it is not what trend followers or passive investors think but performance is decided by the market. In fact, both are at the mercy of the market.  Specifically, long smooth downtrends benefit trend-followers at the expense of passive investors and prolonged sideways choppy markets benefit more the passive crowd usually at the expense of trend followers. At the end of the day, not everyone can benefit.

Let us look at specific examples because pictures are worth 1000 words.

Below is the performance of the popular 1M12 long-only trend-following strategy in the extended whipsaw period in EEM from 01/2012 to 31/2016. 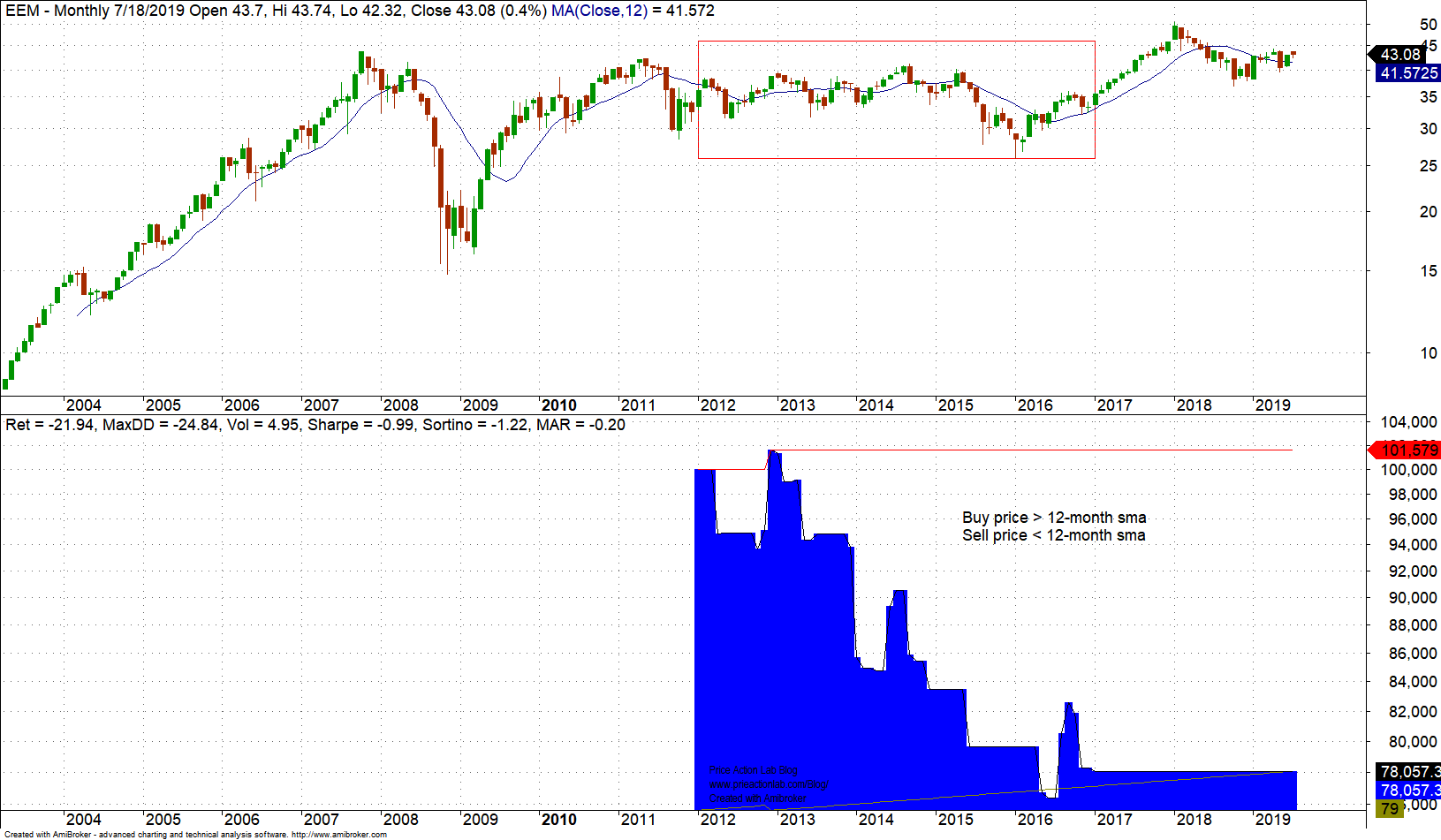 The strategy lost about 22% in the 5-year period due to failure in dealing with the chopping action. On the other hand, buy and holders were not affected. 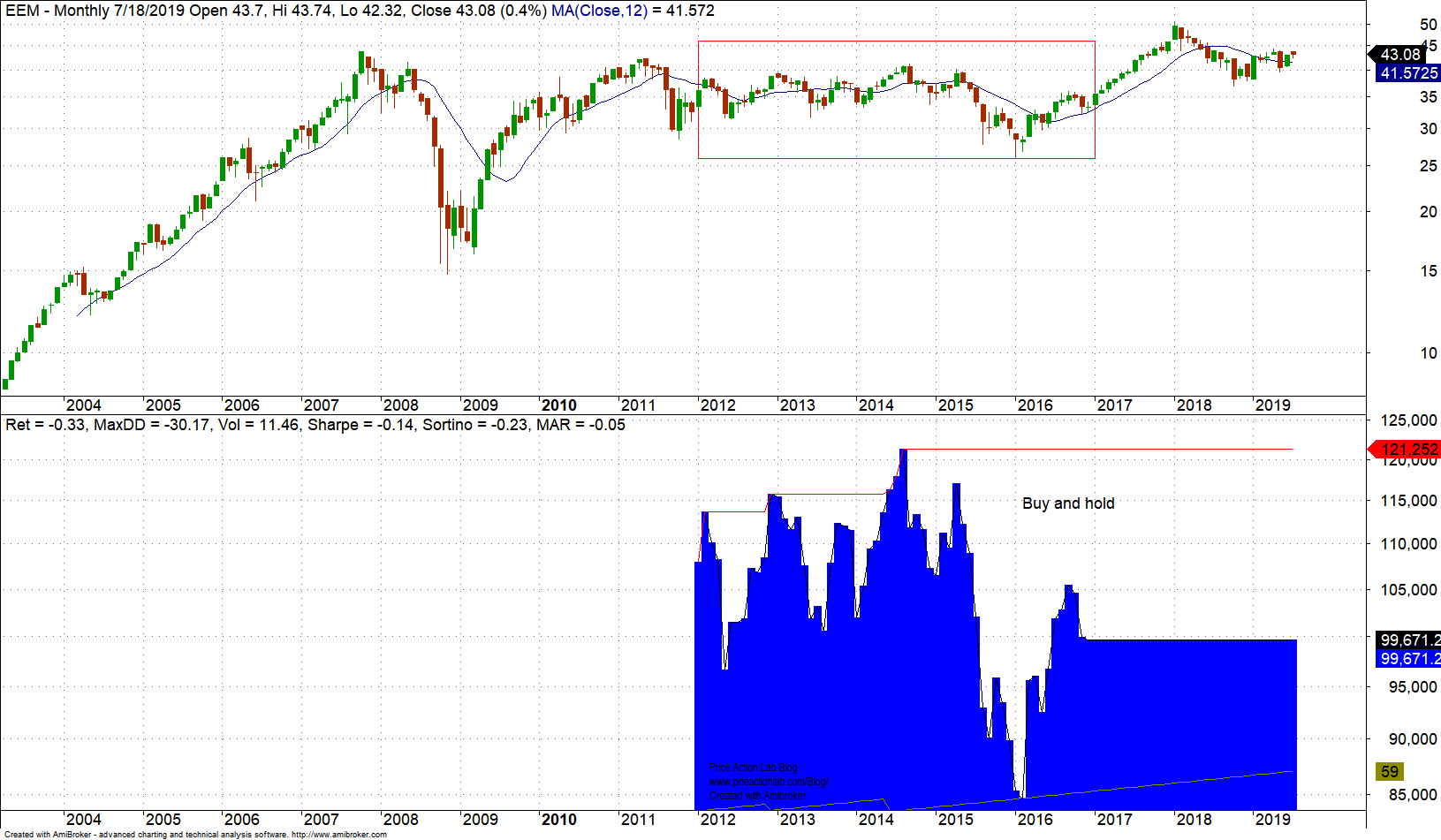 Return of EEM in the 5-year period was about 0%, i.e., no effect on invested capital although both trend-followers and passive investors were essentially speculating on future course of the market.

Below is an example of the performance of the same strategy in the 2008 downtrend. 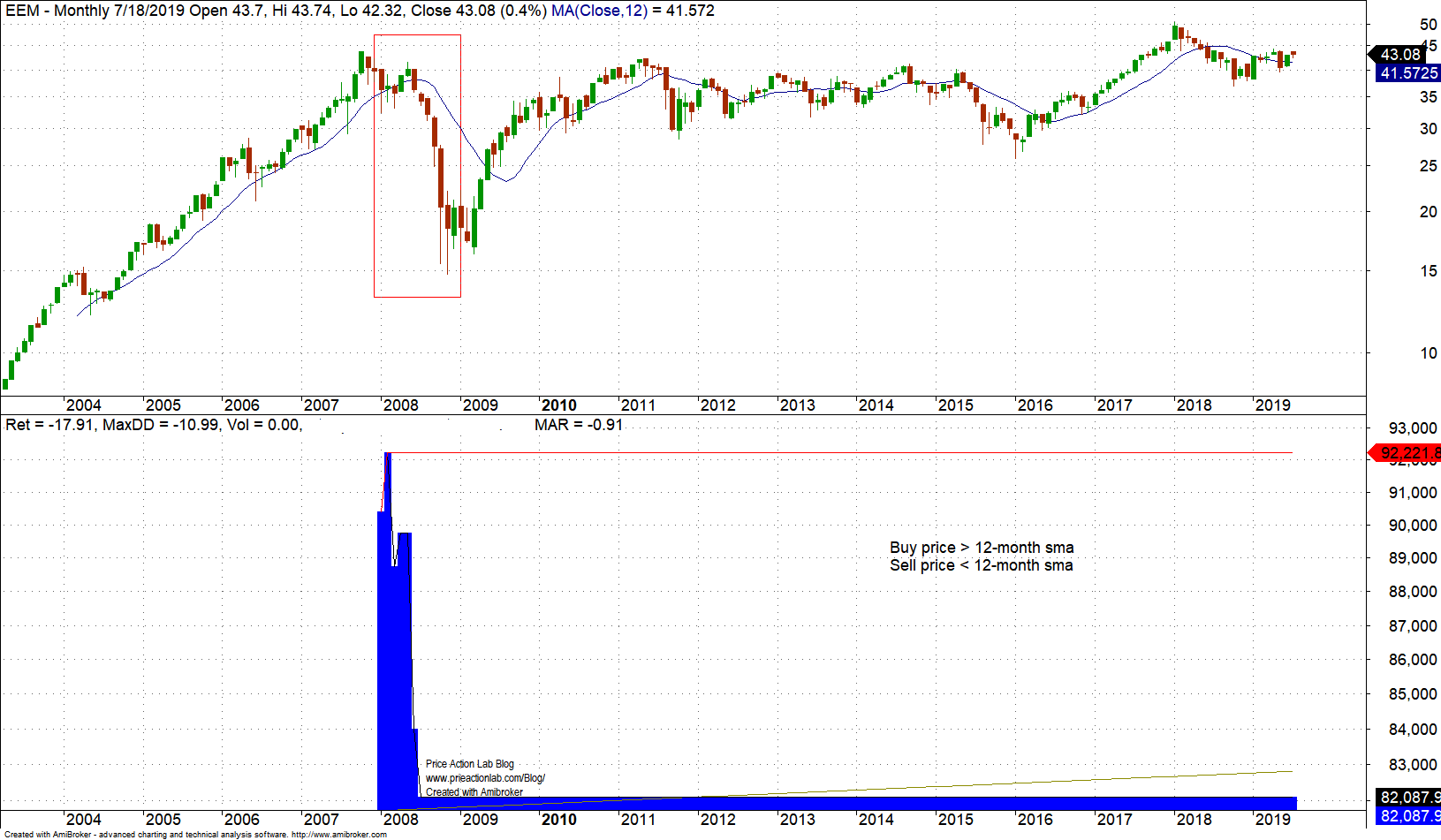 The long-only strategy loss in 2008 was a little less than 18%. Below is the buy and hold performance. 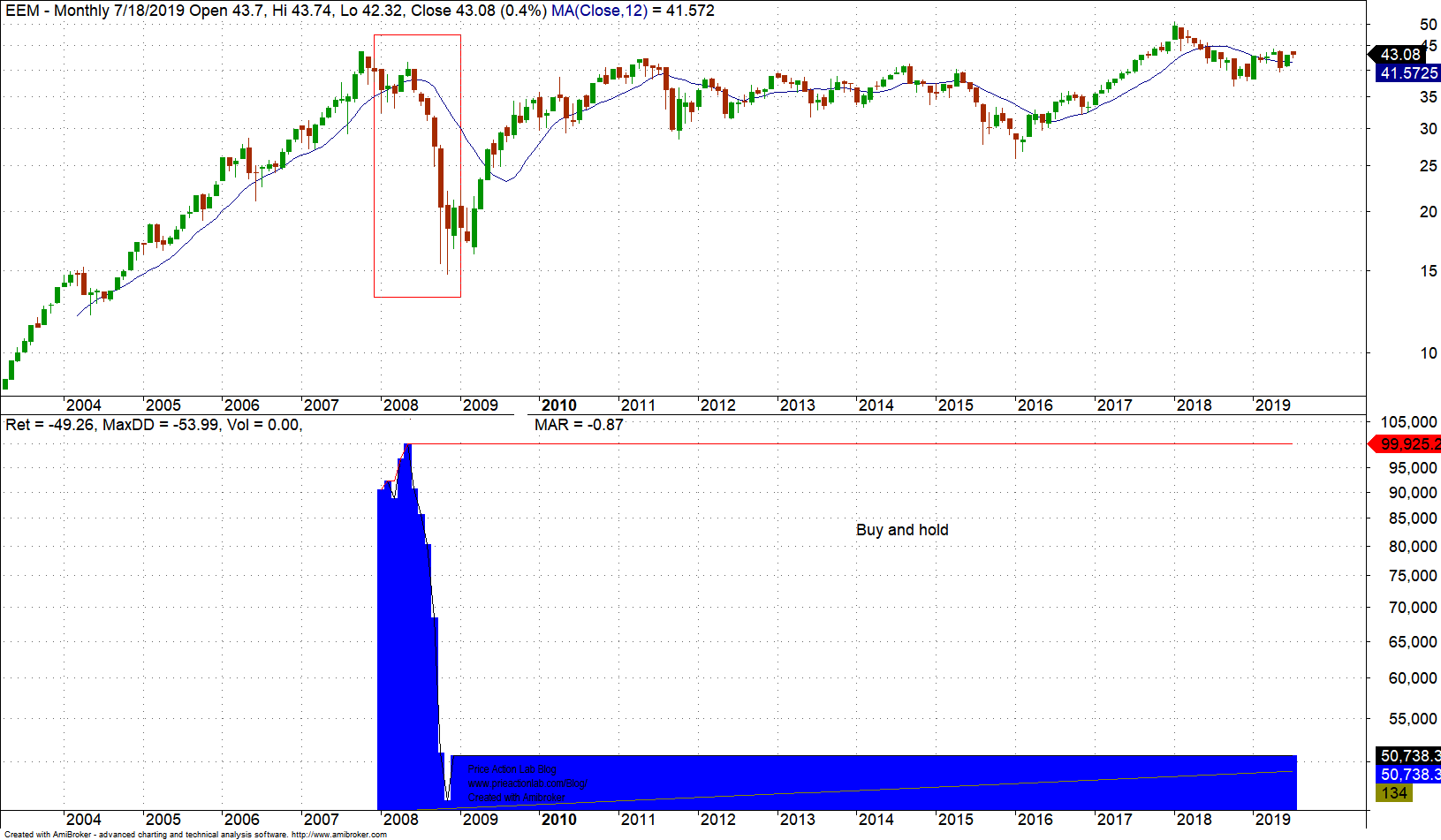 Buy and hold losses in 2008 were about 50%. Therefore, trend-following did a lot better during that steep downtrend than passive investing. In fact, most buy and holders hit uncle point and quit before markets almost recovered in 2011.

What do all of the above mean?

1.  Although both trend-followers and passive investors are speculators, the latter can always blame market action but the former can only blame their skill. This asymmetry has created an unfair advantage in favor of passive investing.

2. Since choppy markets usually punish trend-followers and often benefit passive investors and also given that the latter crowd constitutes the majority of market participants, it is natural for central banks to institute policies that minimize the risk of downtrends and enforce sideways action in the worst case. For example, in the first half of 2015 there was the longest sideways market since 1960, followed by two small back-to-back corrections, instead of the larger correction many analysts expected or even a major top. 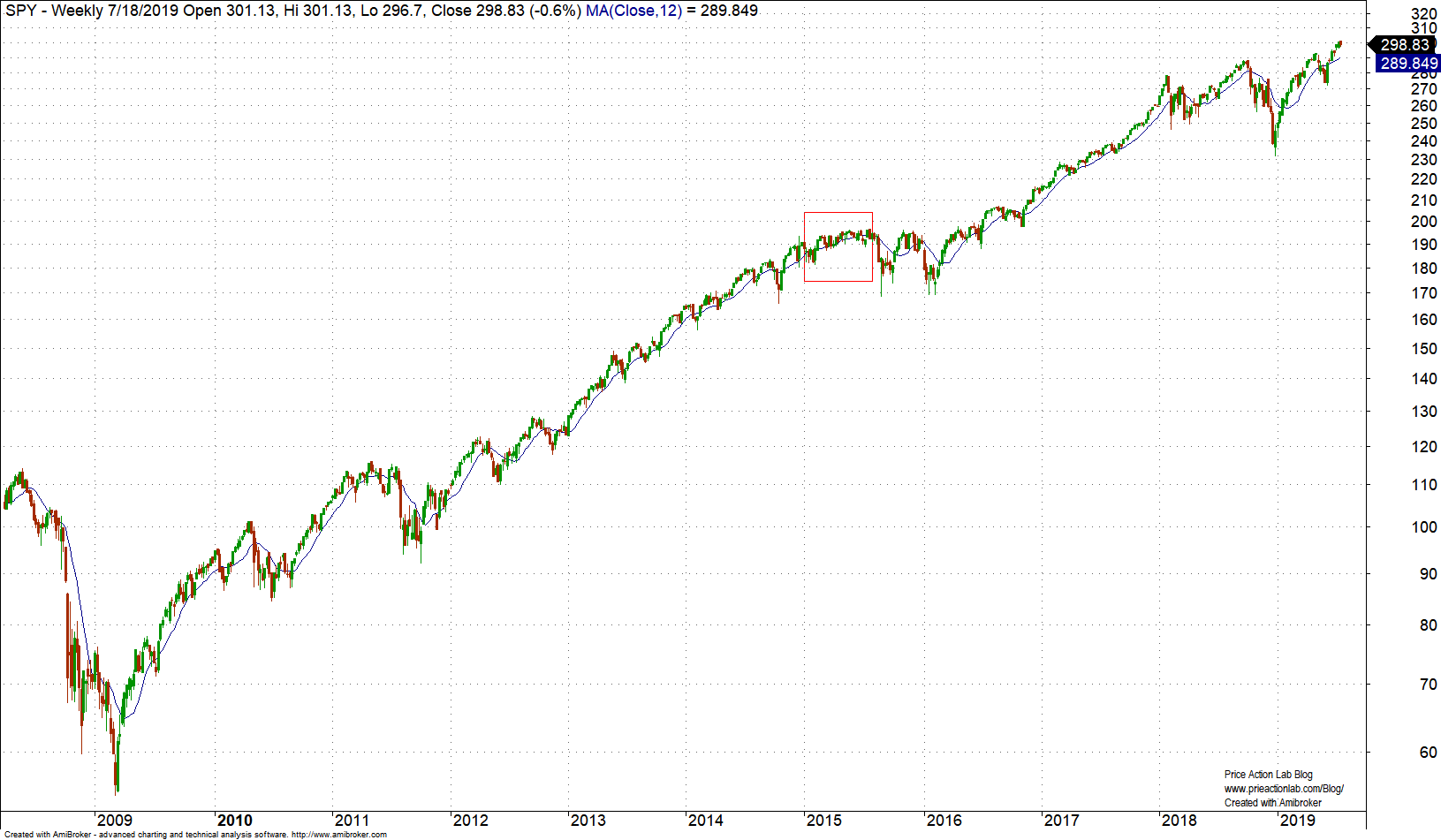 3. When passive investors lose, as in 2000 – 2003 and 2008 bear markets, the only one to blame is themselves rather than the market as they usually do. In our opinion anyone who invests in the market without proper tail risk hedge is a reckless speculator. However, marketing has elevated reckless investing to safe and timing to highly speculative operation. Timing is problematic for many reasons, but passive is reckless without a hedge.