Since 1890 there have been three major regimes in U.S. stocks market: uncertainty, reflexivity and central bank. The new central bank regime is young in comparison to the previous two regimes but it is uncertain if it will endure as long.

The major U.S. stock market regimes are shown on the S&P 500 chart below: 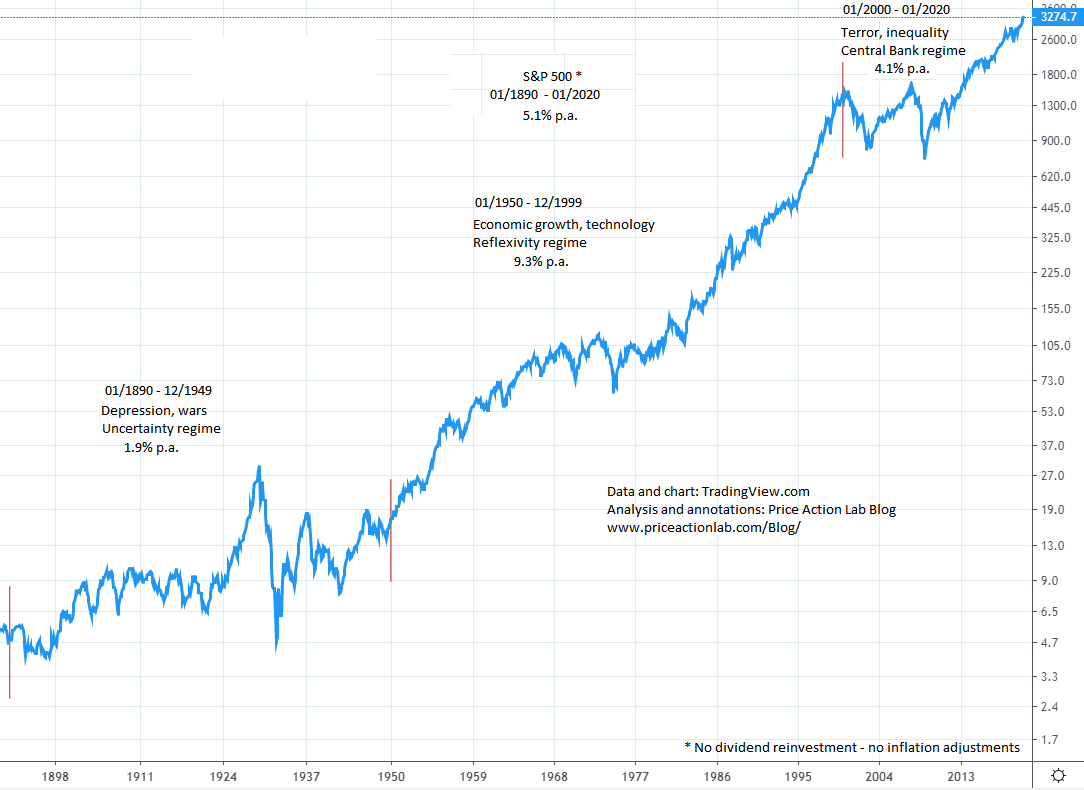 Performance of the index in each regime is shown in the table below:

*No dividend reinvestment and no inflation adjustments

Uncertainty regime: Depressions and wars created high uncertainty among investors. The market managed to generate a small annualized return of less than 2% before dividends but that could have been lower or even negative. The regime ended with surrender of Axis Powers and return to peace.

Reflexivity regime: After WWII, there was a sense among investors that we are entering a long period of peace and growth. Technological advancements were the main driver: the digital computer, space exploration and Internet among them. Price rose because of forecasts of higher prices and in turn higher prices caused forecasts of even higher prices (see the M4 conference presentation for more details and analysis of reflexivity.) The regime ended with the dot com market top.

Central Bank regime: In late 90s, there was the first intervention of FED to bail out LTCM fund. That signaled a regime change with central banks becoming major market participants with the goal of supporting market prices. The loss of serial correlation in daily market returns was a clear signal that the market was entering a mean-reversion period. In addition, the war on terror began. Two back-to-back bear markets with losses in excess of 50% from previous all-time highs prompted central banks to actively get involved in the markets to support them by providing trillions of dollars in liquidity. This has caused inequality to rise and resurgence of socialism.

The Central Bank regime is young in comparison to previous two regimes that lasted 60 and 50 years. However, it is highly uncertain whether this new regime will last much longer. For example, if socialists ever came to power in USA, that could mean the end of the central bank role in markets and a shift away from a market driven economy to a socialist state. Conservatives believe that if the problem of growing trade imbalances with countries such as China is not solved permanently, there is possibility of turmoil in U.S. credit markets and further debasement of the dollar. On the other hand, socialists believe that USA can continue exporting inflation to China with the growing trade deficits and this is necessary for their policies to succeed. The future is highly uncertain and a return to another uncertainty regime and lower stock market performance is likely. However, long-term forecasts are impossible and unexpected events, such as new technological discoveries, have the potential of creating new market regimes and re-igniting reflexivity.