The Plaza Accord on September 22, 1985, was the result of intense lobbying from companies like Caterpillar and IBM to depreciate the U.S. Dollar. That accord had many unintended consequences although it fulfilled some of the objectives of U.S. manufacturing sector.

From 1980 to early 1985 the U.S. dollar had appreciated more than 50% relative to Yen and major European currencies such as the Deutsche Mark and British Pound. The strong dollar impacted the exports of U.S. manufacturing companies and resulted in intense lobbying for its depreciation by the central bank.

The chart of the U.S. Dollar index below shows the major trends. 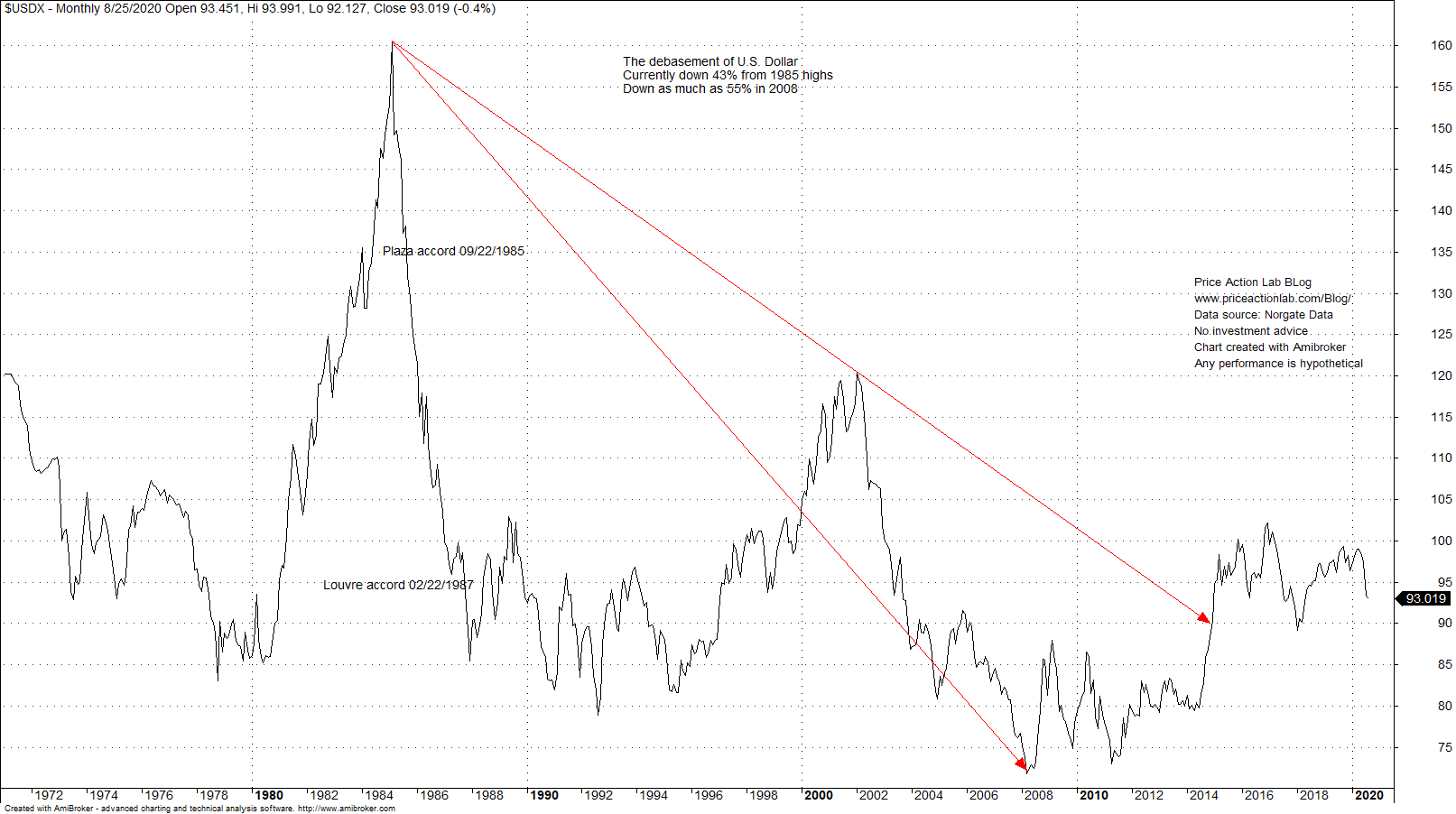 The U.S. dollar decline was rapid after the accord with a loss of about 50% by mid 1987. This rapid decline may have been one of the factors that led to the 1987 crash but this is rarely mentioned. Although the higher order non-linear multiplicative effects of the rapid dollar depreciation had become evident by the end of 1986, the Louvre Accord on February 22, 1987, that intended to stop it came too late and the damage was already done. A major higher-order non-linear effect was the prolonged deflation in Japan for about a decade.

More importantly, the Plaza Accord main objective was to reduce trade deficit with Europe and Japan when no one at that time had an idea that the major trade imbalances would be created after 1998 with the rise of China as the manufacturing center of the world and would cause a financial crisis in 2008.

It appears that the Plaza Accord may have been silently revived lately because although the U.S. trade deficit has narrowed slightly, yet it remains at 2019 levels.

One of the consequences of a low dollar will be a sustained bubble in the stock market and higher bond yields. At some point the bubble will burst causing severe depression in USA and probably around the world. U.S. stock market credibility may be damaged significantly as repeated market swings increase implied risks for investors. The central banks may attempt again to inflate the markets with quantitative easing but it is not guaranteed that will work.

In conclusion, debasement of the U.S. dollar at this point ignores lessons of the past. It is a short-term remedy with possible severe longer-term consequences for the stock and bond markets but also for worldwide economy.