Making Sense of the Stock Market

Year-to-date, the S&P 500 is up about11% despite a pandemic, record unemployment, lockdowns and whole sectors of the economy in shambles. Is it possible to make sense of this stock market?

Markets make no sense in the context of linear logic because they are highly non-linear, stochastic systems. In other words, markets are so complex that there is no model to describe them. As soon as a model becomes good in describing markets, the market responds with invalidating it forward. Anyone involved in trading and investing strategy development will immediately get the point. In statistics and probability, it is called Geometric Brownian Motion and non-stationarity. The statistical properties of the market constantly change so that no one can make full sense of it. This is the market; you love it or hate it for what it is.

Year-to-date, the S&P 500 is up about 11%. This is a gain above the average longer-term annual return of 9.2% since 1940. Does this make sense given the economic conditions and unprecedented rise in unemployment and fall in GDP? 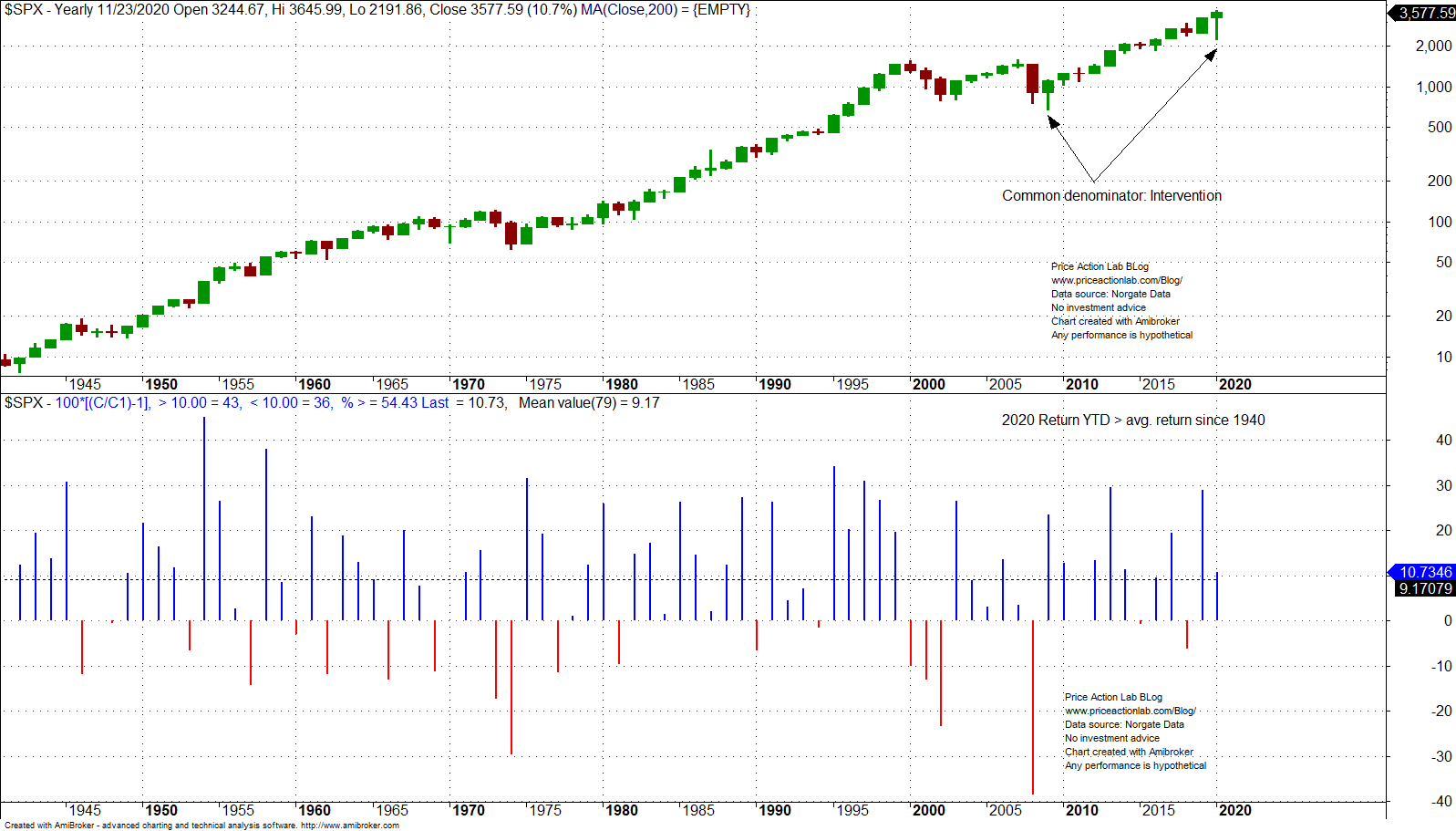 If linear logic is used, then the gain year-to-date does not make any sense even if someone does not question the rebound from the March lows .The S&P 500 has gained about 60% from the March 23 bottom. No, it is not a typo; it is an actual 60%.

So how something can go down 31% from February 20 to March 23 and then surge 60% from March 23 to November 23? A “normal” market, if there is something like that, would probably need a few years to recover. It took about two years for the market to recover from the 1987 crash. What is different now?

In 198, there was no quantitative easing, or the several variants of it. Markets had to recover on their own. Then, in 2009 markets ceased to be free markets and central banks took over. As shown in the above chart, the common denominator between the 2009 and 2020 recoveries is central bank intervention.

Can the stock market rise forever if central banks constantly intervene to support prices? Possibly, or maybe this will end suddenly if central bank objectives change. No one really knows. Do not listen to anyone who thinks they know; most are charlatans. Investors and traders are just trying to make best out of current market regime for as long it is possible. The party will end, probably suddenly and many people will lose a lot of money. But no one knows when. It may be next year, after 5 years or after 20 years. This market scheme driven by excessive debt levels has expiration date but no one knows it. Those who draw lines on charts, fit a few indicators or use economics are linear logic thinkers.