Buy On Strength Vs. Mean-Reversion Conundrum

Posted by Michael Harris on December 4, 2020

Although the US market has been mean-reverting for a while, buy on strength has also been a superior strategy. Below are analysis and some thoughts for further work.

The analysis below makes use of Norgate S&P 500 index and equity data.  S&P 500 index data cover the period 05/20/1941 to 11/30/2020 and the equity data the period 01/03/2000 to 11/30/2020 and include current and past constituents to remove survivorship bias. We highly recommend this data service to those who would like to remove survivorship bias from backtests (we do not have a referral arrangement with the company.)

I will start with two simple strategies representing naïve buy on strength and mean-reversion.  All backtests below use fully invested equity and do not consider commissions.

Below are the results for the two strategies in the defined data period above.

As expected, BoS is a superior strategy that outperforms buy and hold on a risk-adjusted basis with Sharpe of 0.63 versus 0.50. Below is the equity curve. 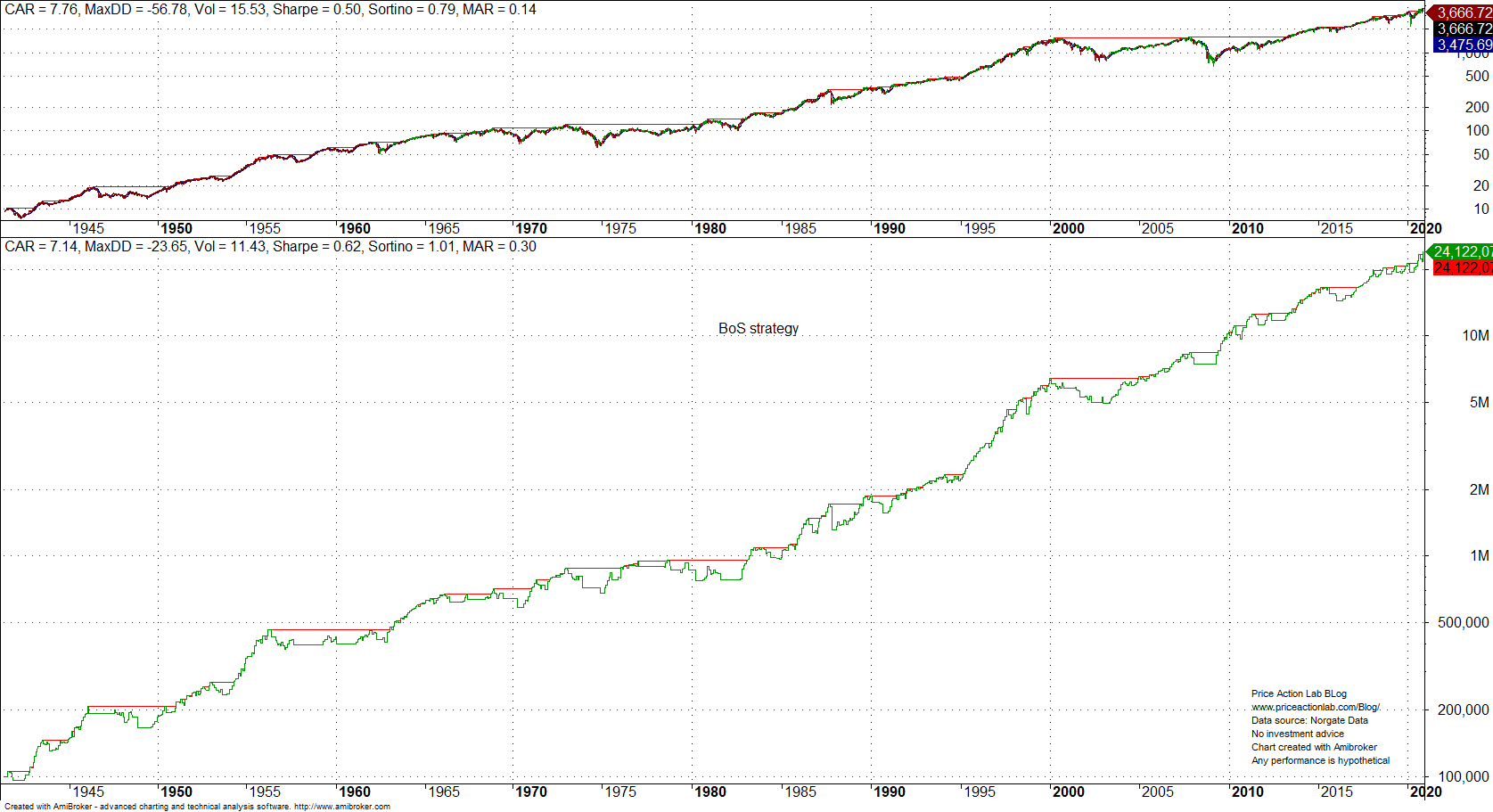 MR is a disaster with the strategy Sharpe barely positive. However, notice that the win rate of the two strategies is about the same at roughly 68%. The reason MR is a disaster is the low average trade in comparison to BoS. The latter strategy makes 15.5% on the average as opposed to only 1.6% for the former and that is a huge difference. Someone would expect that buying weakness should result in higher expected gain since the buy price is lower (buy low, sell high.) But no, this rule does not hold in general. In fact, buy high, sell higher is what has been working in the US market.

Below are the results for the two strategies in the defined data period for stocks.

The Sharpe of BOs is double than that of buy and hold. MR Sharpe is equal to buy and hold but maximum drawdown is above uncle point and the strategy, despite matching buy and hold on risk-adjusted returns basis, it is again a disaster. Also note that win rate for MR remained high but for BoS decreased, as compared to Case 1. The main difference again between the two strategies is the larger average trade for BoS and this strategy outperforms buy and hold on both absolute and risk-adjusted basis.

Why does BoS work but MR does not work well at all?  Maybe if we look at the performance of our proprietary mean-reversion PSI5 strategy in S&P 500 index daily timeframe we may get an initial idea. 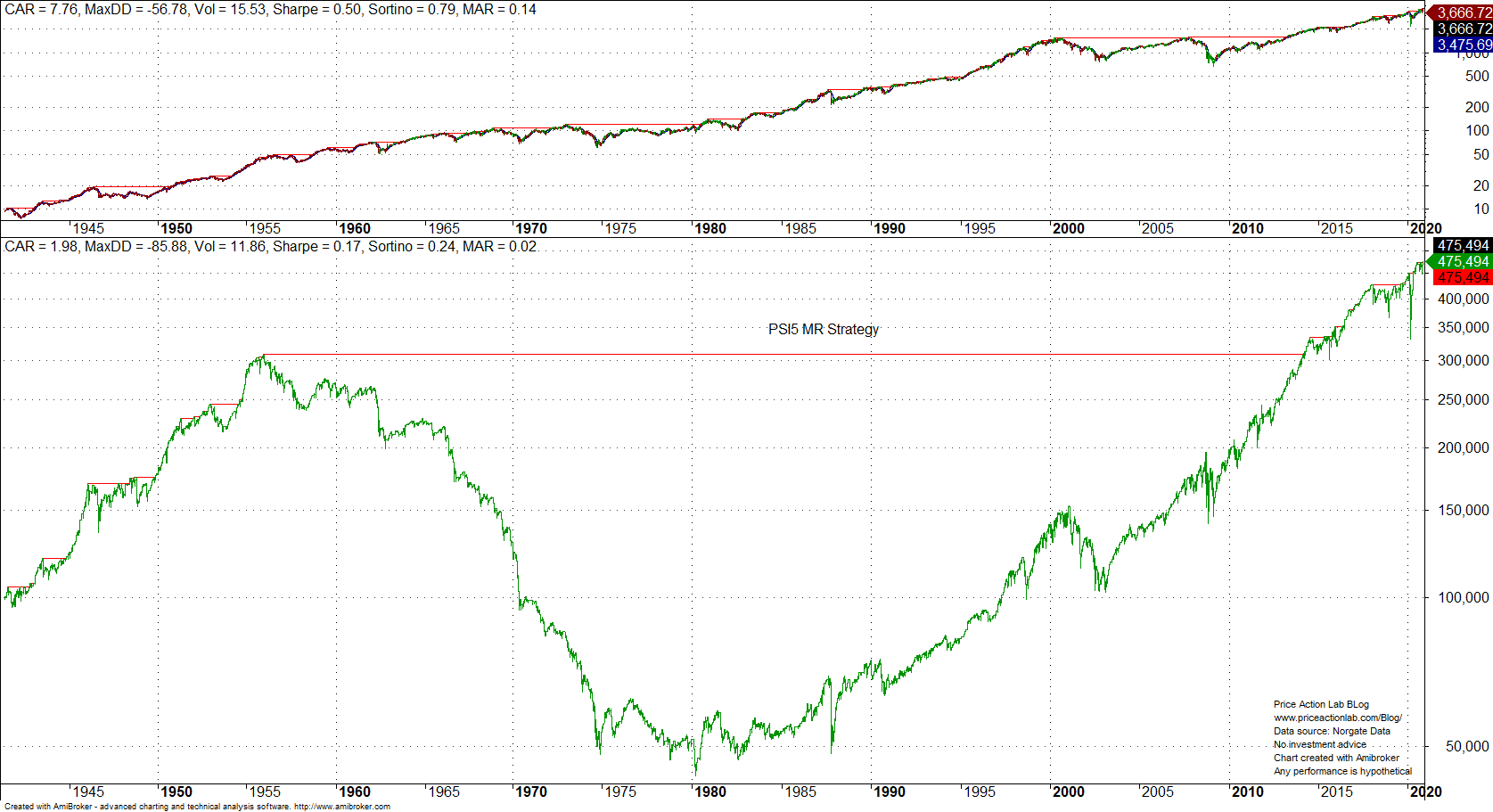 The regime changes could be the outcomes of predominant trading styles of market participants. If participants buy the dips, then mean-reversion has positive performance but if participants chase prices, then it has negative performance. Usually, when the market is dominated by algos, there is strong mean-reversion, but when it is dominated by unskilled human traders and investors that chase prices, then mean-reversion may undergo regime change. However, there is no clear demarcation in the markets and the system is too complex to decompose it into few regimes.

The conclusion from this brief analysis is that buy on strength is a more robust strategy that is less sensitive to regime changes as compared to mean-reversion, or buy on weakness, at least for now, caveat emptor.