Why We Decided To Terminate A Good Product

This week we terminated a good product primarily because many people were confused when comparing it to another but more popular product. This had negative impact on sales due to being unable to choose between the two. It was a hard but necessary decision.

This week DLPAL S was terminated. This is a software product used to identify and evaluate trading strategies suggested by the data. Below are the reasons we decide to terminate this product but first I will provide an introduction.

I started developing algorithms to identify and develop strategies suggested by the data after I finished graduate school in the early 90s. I used those strategies to trade primarily bond and currency futures. In my book Short-term Trading With Price Patterns (Traders Press, 1999) I wrote about this concept that was further presented in other books I authored and several articles in magazines about trading. See this article for more details. Below is an excerpt from that article.

In an article in Active Trader Magazine (”Price Pattern Autopilot”, Active Trader Magazine, September 2002, p. 70.) I presented a software program that could identify repeatable price pattern formations in historical data that fulfilled user-defined performance criteria and risk/reward objectives and also generated exact code for Tradestation, as well as, pseudo code and formula code for other platforms.

Below is an excerpt from the September 2002 Active Trader magazine article. 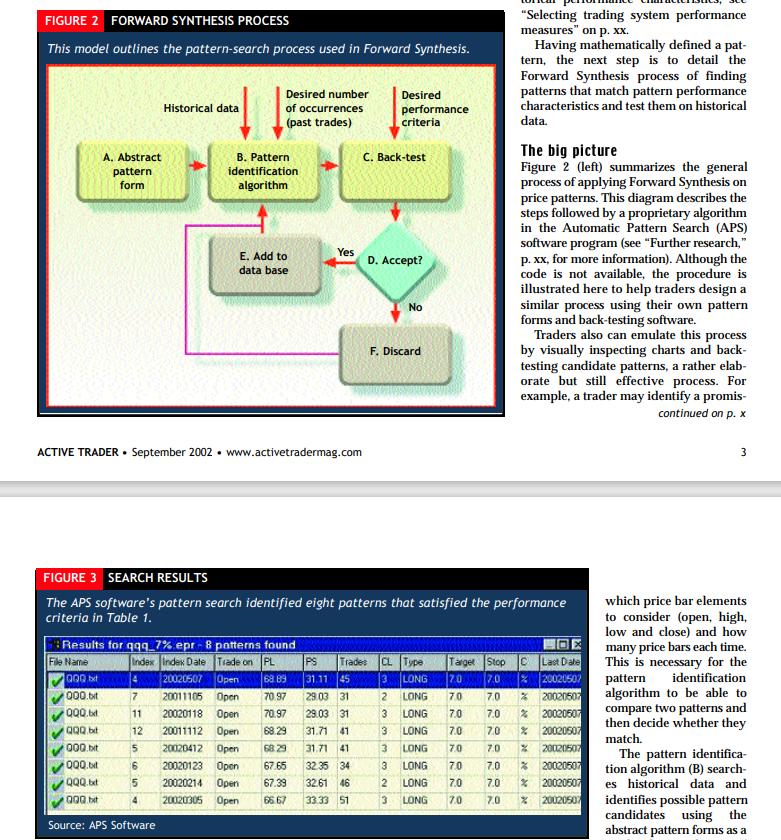 I offered plenty of details about the general structure of a program to develop and validate strategies suggested by the data but not the specific algorithm I used for that purpose. I also decided not to patent the idea because I had to document and  it would become public knowledge. I would have no way of enforcing rights since trading software is intangible merchandise. Therefore, I elected to keep the algorithm trade secret.

Several software developers misunderstood what I did or wrongly thought all they had to do is to combine technical analysis indicators with entry and exit schemes and identify strategies via permutations or even genetic programming algos. Those were failures in my opinion because the problem with strategies suggested by the data is high data-mining bias and most of results are random.  It was clear these software developers were unaware of this problem. But my algorithm was developed from the start to minimize data-mining bias via a proprietary method.

Even that is not enough. Validation of trading strategies suggested by the data is hard and basically the edge is in the validation. Out-of-sample testing is totally insufficient or even misleading and Monte Carlo methods will only confirm the bias. I have written about those problems in other articles.

Although we sold software to develop trading strategies suggested by the data, we also made sure we explained the problems and difficulties doing that. “Fooled by Randomness, Over-fitting And Selection Bias” is an article read by more than 10,000 website visitors in the last 10 years. This article explains the problem of data-mining bias and offers some suggestions for dealing with it.

Over the years, we had some customers who were very successful using DLPAL S and its predecessors but also some that failed to benefit from it. This is to be expected by virtue of statistical distributions of all outcomes associated with the markets. However, the biggest problem of those who failed in my opinion and also the opinion of successful customers was that they had no edge in validating strategies. As a customer wrote:

In my opinion people buy software and want immediate success without work and without thinking about the code of the computer generated strategy. That is the reason why most of them fail…

After the introduction, I explain why we terminated DLPAL S. We offered three DLPAL versions: S, DQ and LS.

DLPAL LS is for professional traders and hedge funds mainly for developing long/short strategies and has little appeal to retail traders who look to develop a strategy for a single market or scan the market for opportunities.

The problem was the confusion created by DLPAL S and DLPAL DQ. We kept receiving emails about the difference of these two products all the time to the point it became quite annoying although the difference was explained on the website. The reason for the emails is that many either did not read anything or they lacked the basic knowledge to understand it.

Apparently, many new to trading don’t understand the difference between using a strategy and scanning he market for anomalies. On top, some of them wanted to take advantage of the opportunity to get free education via the exchange of a large volume of emails in exchange for a possible purchase.

Our sales data show that the more questions a customer asks about a product, the lower the probability of a sale. After about four to five emails with questions, the probability is nearly zero. But the time is wasted anyway and time is money.

Therefore, it became evident that the choice between DLPAL S and DQ was creating confusion and indecision. We had to make a tough choice and it came down the DLPAL S. This choice is also supported by the fact that more than 90% of traders use discretion and are not willing to put the time and effort to develop strategies due to time constraints and other reasons.

As a result, DLPAL S was terminated and we now offer DLPAL DQ for price action anomaly detection and DLPAL LS to hedge funds for long/short strategy development but also directional strategies.