An Irrelevant Forecast Made in 1999 About Dow Jones Reaching 36000

Posted by Michael Harris on November 2, 2021

Long-term forecasts are mostly irrelevant even if they turn out to be right because markets do not move on straight line paths. This holds for the forecast made in a book in 1999 that Dow would reach 36000. What counts are the strategies market participants use to deal with market swings.

There were many mentions in financial social media and blogosphere yesterday about a 1999 book with a Dow 36000 forecast. I have heard of that book back in 1999 and along many other traders perceived it as a signal of an imminent top, which actually occurred after a few months.

Anyone can make a long-term forecast based on correct or wrong premises and end up a winner due to survivorship bias. Furthermore, I have argued in the past that forecasts about higher stock market prices are naïve because as long as the US stock market has a positive upward drift, prices will move up in the long-term.

What counts are not the forecasts but what strategies market participants use to deal with bear markets, corrections and unexpected events.

I immediately dismiss long-term forecasts that make references to price levels. What is more important are the confidence intervals. Those are rarely provided in books or even articles because they cannot be estimated. 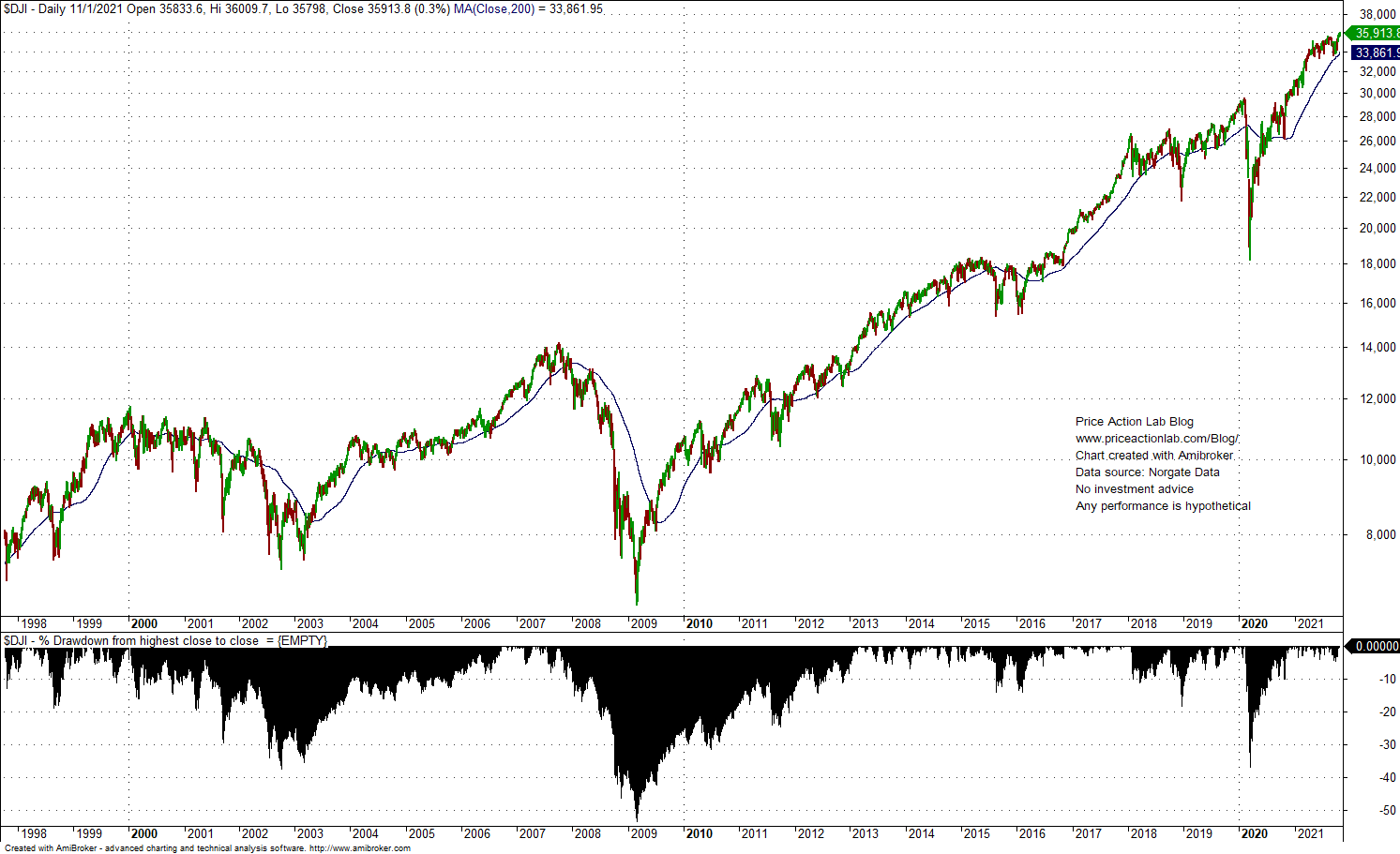 In effect then, the Dow 36000 forecast signaled a top that started almost immediately with prices falling about 40%, followed by another top after eight years from the previous one with prices falling again about 40% with respect to that top and about 53% from the new highs in 2007 and back to April 1997 price levels!

Did the book say Dow will reach 36000 but in 2009 you will see again 1997 prices, or prices two years before the book was even published?

The opportunity cost is too high after investing for 8 years to see prices falling to levels realized two years before you even started. This is one reason long-term forecasts for markets where returns are generated by a stochastic process are naïve to say the least.  What is more important is the strategy to use to ride the waves than the forecast.

We will never know how many passive investors left the market with losses during to dot com bear market and never returned and how many of those that managed to stay invested left after the market fell to 1997 price levels in 2009.

In a similar way that market indexes are balanced frequently to maintain an upward drift by removing and adding companies, new passive investors always replace the old ones that depart with losses after bear markets and corrections to offer a perception that this type of investing has any real meaning other than being a sitting duck in the middle of a lake when a group of hunters who have no respect for nature wild life arrive.