This is a sample report. The information in this report is outdated.

The report is for week of December 7, 2020, and includes analysis of major market indexes, ETFs and spot currencies. Access to full article requires Premium Articles subscription.

No 2 above includes two backtests of a pattern in S&P 500 index.

In the last five weeks, or 24 trading days, the S&P 500 has gained 13.1% without becoming overbought in both daily and weekly timeframe.

Below are the results of a backtest where we short the index (hypothetically) if the 24-day rate-of-change is higher than 10% and the RSI(14) is below 70. Exit is after 5 days.

Win rate is 43.5% and equity performance is random. As expected, if the index is not overbought, it is still in a bull market after a gain of 10% in 24 days and results from short positions are random. Below is what happens if we wait for the index to turn overbought.

Win rate is 52.5% and there is a small positive bias after the 90s. The bias increased during this year with two short trades, one in June and the other in September, with a gain of about 6% each, or in other words, the index had a short-term correction after these two signals of 6% or more in the next five days. Note that if we shorted (hypothetically) the index this year when RSI(14) was above 70, that would have resulted in six trades with 50% win rate and 8% overall gain.

The conclusion from the above two backtests after factoring in the limitations, small samples, etc., is that there may be a short bias in the market after a bull run but only when prices are overbought and before that the outcome of short positions is random. Caveat emptor: there may be regime where the market remains overbought for extended periods of time.

The Russell 2000 gained 2% on the week to finish at new all-time highs.

The index has gained 23% in the past five weeks, or 24 trading days. Normally, a correction should follow of about 4%, or even more.

The average 120-day correlation of the returns of S&P 100 stocks with the returns of the index fell to 0.48 from 0.54 the week before, as shown in the daily chart below.

After the fall in the average correlation of last week, conditions are now in place for a consolidation or even a correction. In our opinion, risks of a downside move have increased.

4.Overbought/oversold analysis of major indexes in daily and weekly timeframes

All major indexes ended the week at new all-time closing highs. NASADAQ and Russell 2000 are overbought in the daily timeframe.

In weekly timeframe, NASDAQ is overbought for one week and Russell 2000 for three weeks.

ETFs are sorted by highest RSI(14) value in daily timeframe.

SMH has gained 109.3% from the March lows and is up 55.1% year-to-date. This ETF is highly overbought in the daily timeframe according to PAL OB/OS indicator and a short-term correction could occur next.

ETFs are sorted by highest value of overbought/oversold period based on PAL OB/OS indicator.

Fifteen ETFs are overbought in the weekly timeframe, eight for three weeks, including XLE and EEM, six for two weeks and one for one week. UUP is oversold for one week.

XLE is overbought in the weekly timeframe for three weeks according to PAL OB/OS indicator but has potential for 10% rise to about 45 before a short-term correction occurs.

It is unknown how high the Telecom ETF (XLT) can rise but it is now overbought in the weekly timeframe for three weeks in a row and some profit taking could come next. However, there could be potential here for medium-term gains.

All factor ETFs gained on the week due to broad market rally. More than half of the factors are now overbought and at new all-time highs. The market is becoming highly overbought in the short-term.  Note that the Russell 1000 factor (IWF) now outperforms S&P 500 growth factor (SPYG.) Low volatility S&P 500 (SPLV) is the only factor that is down year-to-date.

Before the last two bear markets, the ratio rose and in the case of the 2000 top the rise was extreme. The recent rise in the ratio could be a signal of another market top although this is a sample of only two. The relative moves with sharp rise in the ratio are most probably unsustainable in the medium-term but the market can remain in this state for extended periods of time.

ETFs are sorted by highest YTD return in daily timeframe.

International markets rebound continued for a third week in a row. A large number of country ETFs are overbought. Austria ETF (EWO) is overbought for 15 days in a row.

South Korea (EWY) is up the most year-to-date (+33.5%) and overbought for four days after being overbought for 10 days by the close of the previous week. A short-term correction is highly probable in the next two weeks.

Platinum ETF (PPLT) gained the most on the week, +10.4%. Rare Earths/Strategic Metals (REMX) is overbought for 21 days in a row. Copper (JJC) is at new all-time highs.

After gaining about 24% year-to-date, continuous backadjusted copper futures are now facing technical resistance while in overbought territory for seven days in a row.

Swedish Kronor is up the most against the US dollar year-to-date with a gain of 10.7%. The Euro is up 8%. At the other extreme, Turkish Lira is down about 24%. Only three currencies are down more than 5%: Rubble, Real and the Lira.  There are no oversold currencies.

NZ Dollar is overbought for 9 days in a row. Violent short-term and even medium-term trend reversals can occur after extended overbought conditions in NZDUSD.

8. Chart of the week 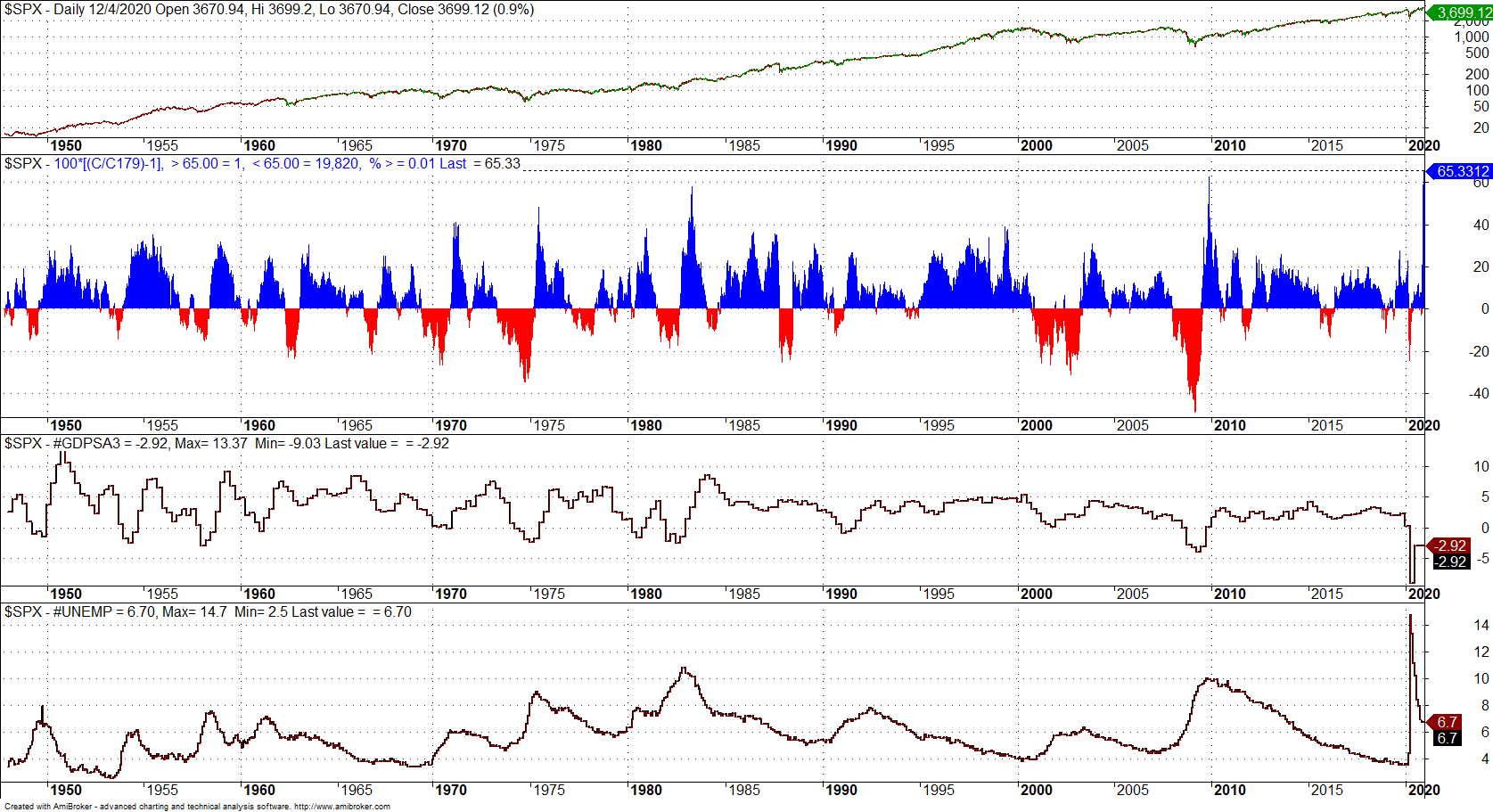 Despite a GDP fall of 9.2% in the second quarter of this year with a simultaneous jump in unemployment of 14.7%, the S&P 500 has gained 65.3% from the lows of March. How can this be possible?

Speculation has reached extreme levels with investors convinced there is nothing to derail the uptrend. Usually, large corrections occur when investors expect them the least.

Extreme speculation always ends with a stock market crash. The conditions are in place for a large correction but the timing is unknown. Unfortunately, no analysis can point to the exact time of these events because they always require some trigger that is random.

If you have any questions, you may contact support.

Specific disclaimer: This report includes charts that may reference price target levels determined by technical and/or quantitative analysis. No updates to charts will be provided if market condition changes occur that affect the levels on the charts and/or any analysis based on them. All charts in this report are for informational purposes only. See the disclaimer for more information.