There was a heated discussion in Twitter a few days ago with even some harsh language about the importance of the Dow Jones Industrial Average now that the Dow 20,000 level frequently makes the headlines. The answer requires some trivial analysis.

Since the first day I started trading the markets in early 1990s, I have never paid attention to any claim that are not demonstrated with analysis. I do not care what anyone believes or thinks about the markets; I care only about what I can show using math, in most cases very simple. Talk is irrelevant to me.

Should investors pay any attention to the Dow Jones Industrial Average?

This is the ETF era. So let us take a look at the relevant ETFs first: SPY for S&P 500 and DIA for DJIA. These also allow us to analyze performance on a total return basis in an easier way. Note that the DIA ETF came a few years after the SPY ETF and the chart below starts at its inception date for comparison purposes. 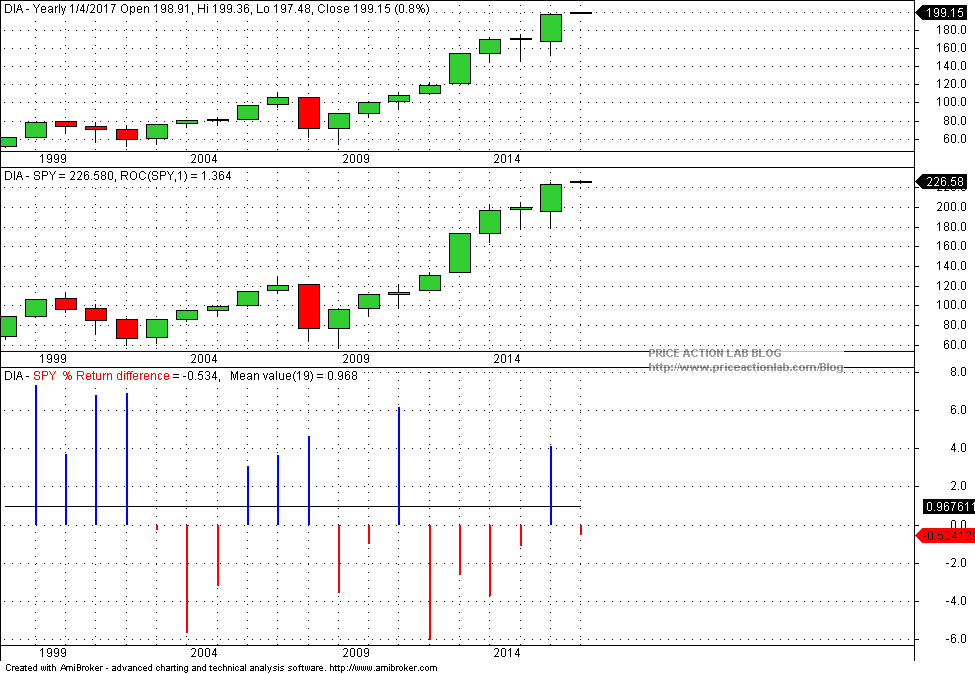 The above chart shows the difference of annual total return performance of DIA and SPY. The average difference is about 1% and in favor of DIA.

We can also see a pattern: During strong uptrends, SPY outperforms while during bear markets, it underperforms. This is reasonable since SPY is a much broader index.

We got an idea but the sample is small. Next, we look at the indexes since 01/1950 without any dividend adjustments. 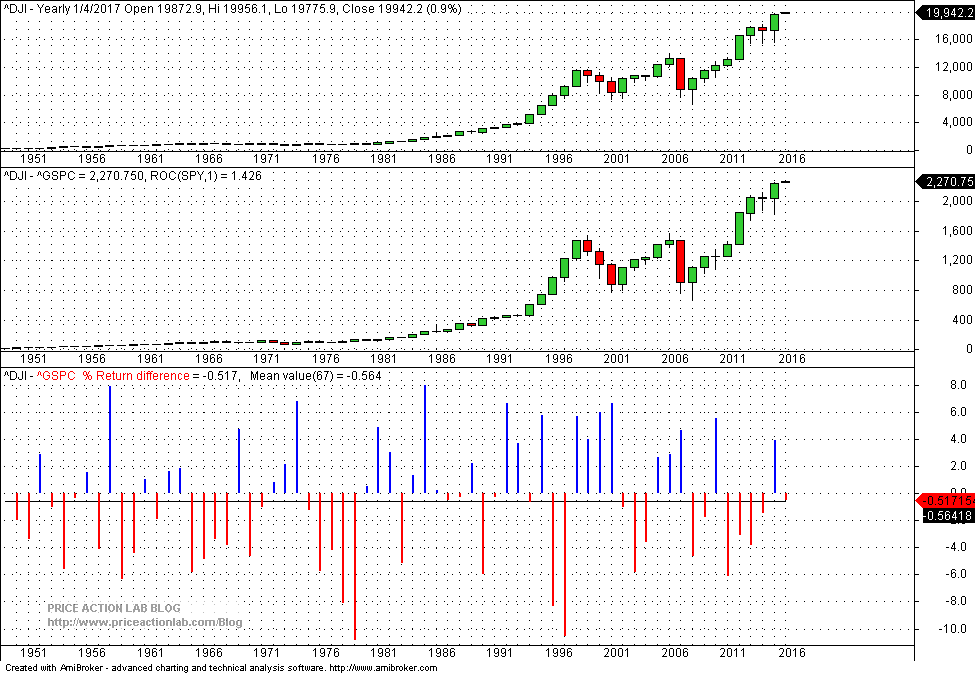 From the above chart we see that since 01/1950, the average difference in annual performance without dividends is 0.56% in favor of S&P 500. We can now observe the early part of the 1990s rally and we confirm the previous pattern according to which S&P 500 outperforms during strong uptrends but underperforms during bear markets, as should be expected.

So how important is the Dow? Should we scrap it?

In other words, the optimal strategy appears to be a switch from S&P 500 in portfolio allocation (for example 60/40)  to Dow, when the investor gets close to retirement just in case of a bear market event. However, these are ideas that must be scrutinized by a competent financial adviser.  But the short answer is:

Yes, the Dow is important but maybe too much noise about Dow 20K is irritating to serious traders and investors.

I hope I provided the basis here for some further work. As I said, any claims that are not backed by some analysis are vacuous. Even if the analysis is wrong, there is still ground for improvement but this exasperating phenomenon of people claiming all sorts of things without any support from analysis is quite peculiar and has accelerated recently by the advent of social media.