Posted by Michael Harris on September 3, 2015

If you believe this is counter-intuitive you could try to think about it in a different way: If the frequency of backtesting made a difference in discovering an edge, then all those traders who struggle with machine learning algorithms would instead be rich. So what is the process that turns frequent backtesting into an exercise in futility?

The answer is data-mining bias. As time goes by and a trading system developer tests more ideas, new or modified, data-mining bias increases and at some point it becomes so large that the probability of discovering a true edge via backtesting gets close to zero. This counter-intuitive notion that the frequent use of backtesting decreases the chances of success is illustrated in the figure below: 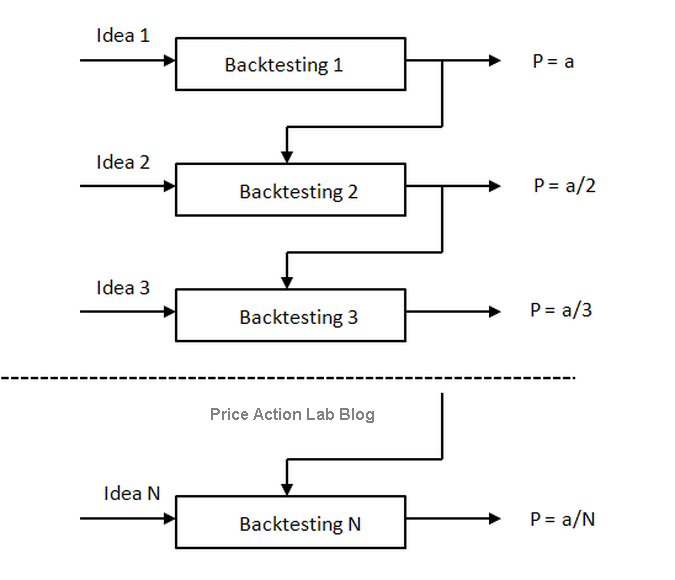 In the above figure, “a” is in general a non-linear function of N and of other parameters that assumes a value of less or equal to 1. This means that the probability P tends to 0 as N becomes large. Essentially, those that backtest constantly have very low chances of finding an edge. This includes machine learning programs that mine data relentlessly until something is over-fitted in the in-sample and curve-fitted in the out-of-sample by chance (See this article for more details.)

The conclusion is that traders should use backtesting only when there is a good idea to test. Actually, the idea must be as unique as possible. Then, the objective should be to try to debunk it, not prove that it is good by adding more filters and conditions. One of the fundamental problems of users of backtesting is that they try to prove that an idea is good when they should be trying exactly the opposite. The reason for this, which is also a counter-intuitive notion, is that there are very few edges and the probability that any one idea you backtest is a fluke is close to 1 to start with.

Quote from another article:

So how can we deal with the paradox of the elusive market edge? One way out is by using backtesting only when there is a unique idea that is unlikely to have been found by others. This is obviously hard but possible. The other remedy when data-mining is used often is by using more advanced tests that minimize data-mining bias instead of trying to estimate it. In general, data-mining bias cannot be estimated because both the real number of trials and its sources are unknown.

These and other facts about backtesting that are rarely or never discussed, along with specific rules and examples of how to deal with data-mining bias, can be found in my new book.