The Passive Indexing Buy and Hold Crowd Should Reconsider

They should reconsider their unreasonable stand against active management after taking a closer look at the enclosed chart. In my opinion, 15 trades in 13.5 years are not such a big deal for the type of dramatic improvement in returns. The truth is that someone who invested in SPY at the start of 2000 is still making a negative return after inflation adjustments even if dividends were fully reinvested. On the other hand, a professional with 15 switchings from long to short could have made close to 9% annually. 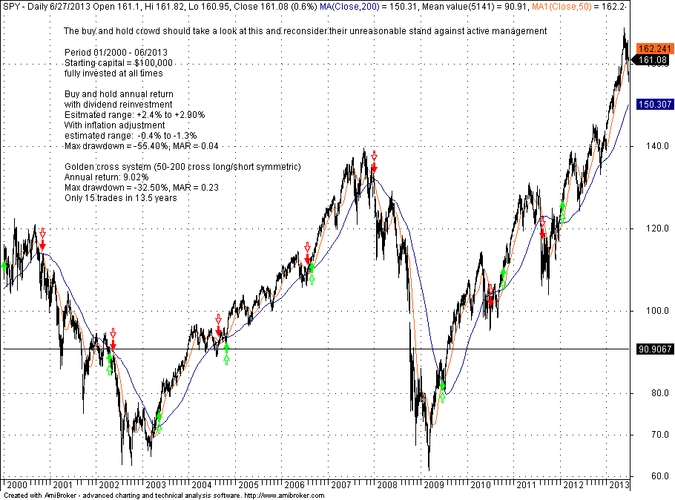 Even with the dubious golden cross system – a 50/200 simple moving average cross – a professional could have outperformed buy and hold by almost an order of magnitude. This is a huge difference. So I have no idea what is the purpose of all those attacks against active management. Do they have in mind a total automation of the investment process where a big computer located somewhere would passively index portfolios and allocate the profits to investors, some type of a socialistic system maybe?

In my opinion, 15 trades in 13.5 years based on the golden cross system – by the way there are even better ones – is not very frequent active management but results in a MAR ratio of 0.23 versus 0.04 for the buy and hold. This is because drawdown is also reduced significantly from -55% to -33%.

I think the passive indexing crowd should reconsider their unreasonable stand of denying empirical facts. Yes, there are bad managers but there are also bad markets to passively index so that is a wash in terms of an argument.