Posted by Michael Harris on November 2, 2013

Based on a simulation of 20,000 random long/short systems trading EURUSD using daily data, the percentage of winners turns out to be a number statistically indistinguishable from 0 even in the presence of 1:1 leverage and when spread and slippage are in the range of 2 to 3 pips. The situation with intraday trading is a lot worse. Based on 1-min EURUSD data in a 5-year period, any amount of spread or slippage results in a 100% failure rate.

I know this study may be boring to many experienced traders but the statistics I have generated are quite interesting. I always suspected that retail forex trading is a negative-sum game with a very high failure rate but not to the extent the data I have generated indicate. The results of this study are simply stunning. 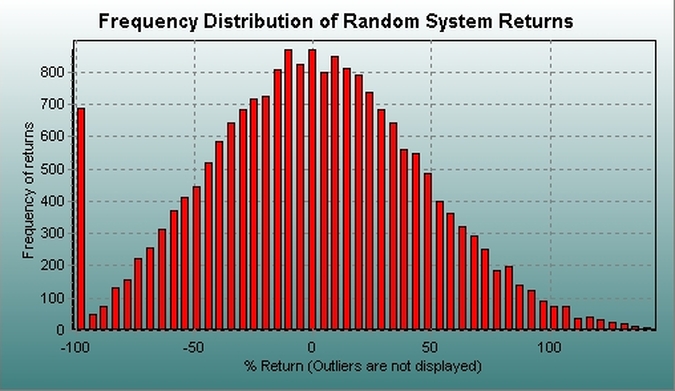 The above graph is a frequency distribution of the net total return of the random systems of the simulation (100 x net profit/starting capital). The spike at the far left of the graph is near a -100% return, corresponding to a situation when the equity drops below the required margin ($2k in this case for 50:1 leverage on margin) or an account faces liquidation.

The statistics confirm the zero-sum game nature of the forex market. The mean return is close to 0% with a stdev close to 50% (the exact figures are not important). Half of the systems generated returns greater than 0. About 3% of systems were stopped out or liquidated. But in this case there was no spread or slippage applied.

In actual retail trading, however, buy orders are usually filled at the ask price and sell orders at the bid. Thus, in an ideal situation there will be at least 1 pip fill spread for long positions. The average spread of some popular retail brokers for EURUSD is between 1 and 1.5 pips. Slippage must be added to that due to fast or volatile market conditions. Let us assume in the following case that spread+ slippage is only 1 pip on average per trade, long or short. The distribution of returns changes as follows: 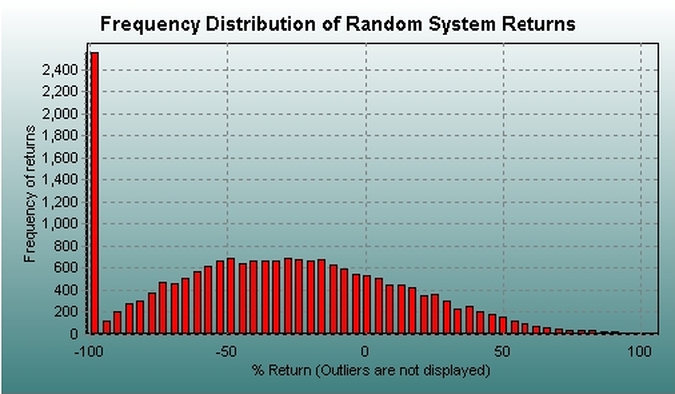 A higher peak may be seen at the left far side of the distribution of returns, meaning that when spread and slippage are added more systems are stopped out or liquidated. In addition, the mean return is now negative at -32% and stdev is 45%. This is now a negative-sum game with only about 35% of the random systems making a net profit.

This get worse, as expected, when spread and slippage are increased to 2 pips per trade: 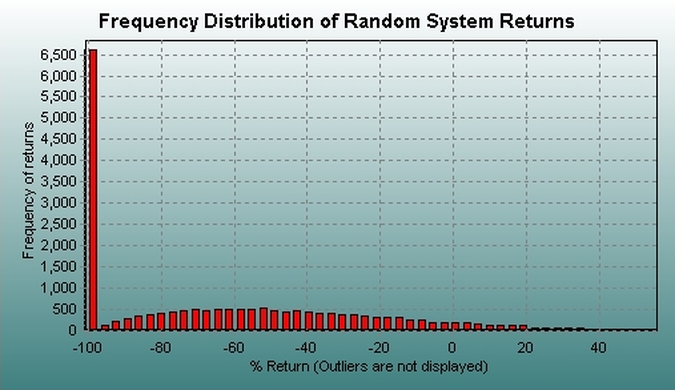 In this case the mean return drops to -61%, stdev is about 38%, 33% of systems are liquidated and only about 8% make a net profit. One may induce that an additional small increase in spread and slippage ruins all systems, which is the case actually and I will not show the distribution because it is just one bar at -100% of returns, i.e. total ruin for all systems.

Remember that the above simulations were for account leverage 1:1, i.e. an account of 100K was used to trade one standard lot of $100,000 face value. Things are of course a lot worse when the starting capital is smaller as that can be induced from the results. It turns out that for accounts smaller than $20K, the results are devastating even in the absence of spread and slippage. For example, for 10K starting capital and 0 spread and slippage, only 14% of systems end up with a net profit and about 86% of systems are stopped because equity drops below required margin.

If 1 pip of spread and slippage is added in the case of a 10K starting capital, then 95% of systems are stopped and only 5% generate returns greater than 0. Needless to say what happens in slippage is increased. This result is compatible with the general conception that 95% of all small account retail forex traders lose money. This is an inescapable reality of this market.

For starting capital of 50K and 1 pip spread and slippage, about 55% of systems are stopped out or liquidated and only 23% generate positive returns.

The conclusion is that because of the zero-sum nature of forex trading (no wealth creation), a small amount of spread added to the bid price turns it into a negative-sum game even for 1:1 leverage. The losers are retail traders who trade frequently and the beneficiaries are the market makers. Actually, this is a lucrative business for market makers because the statistics show it is highly biased in their favor, as a function of spreads and slippage.

Is the zero-sum game manifested also in the case of intraday data? Below is an example using 1-minute EURUSD prices in the period 05/2005 – 05/2010, for 100K starting capital (1:1 account leverage) and 0 commission and slippage. In this case, due to the sheer amount of intraday bars (close to 2 million) only 1,000 simulations are performed: 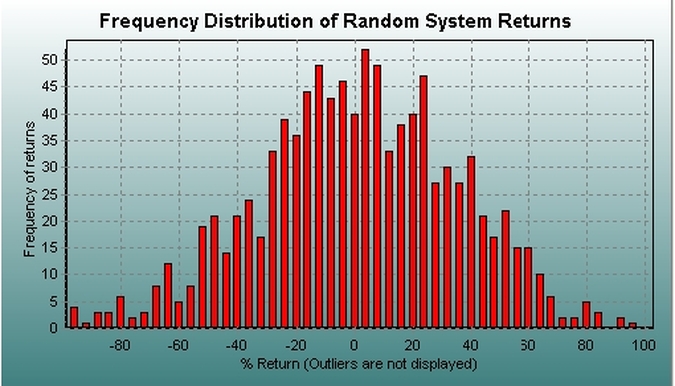 The zero-sum game nature of forex is also confirmed in this case with close to 51% of random systems making a positive return and about 0.5% getting liquidated or stopped. The mean return is 1.58% and stdev is 35%.

However, when spread and slippage of only 1 pip is added, a massive breakdown occurs with nearly all systems getting stopped or liquidated: 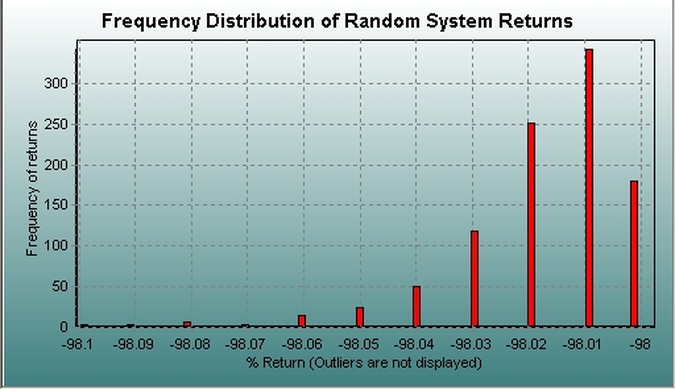 In this case no systems have positive return and 100% of systems are ruined. And this was for 1:1 leverage and 1 standard lot per 100K of initial equity. No need to mention what happens with

The conclusion is that frequent intraday retail forex trading is a devastating negative-sum game for the totality of participants in the longer-term as soon as commission and slippage are introduced. Skill and luck play no role because making a profit is impossible in frequent trading under these conditions of trading friction.

Now, someone could object to these findings claiming that the results of the study were based on simulations of random systems. This is true but he must also realize that the market does not know whenever one buys or sells whether he used some algorithm, trading method, or discretion, or whether that was the outcome of a coin toss. That is irrelevant when our aim is to generate descriptive statistics about a market. Of course, there will always be cases that escape the boundaries of this simulation that was restricted to frequent retail trading, like for example infrequent trend-following or some other strategy based on skill or an algorithm. The message from this study is that small account retail forex traders, usually not well skilled and uninformed, have no chance to profit when there is friction involved, i.e. spreads and slippage. But I would not go as far as recommending people not to trade forex. Actually, trading forex with a mini account is a good way of paying tuition to learn how to trade and how economic releases impact prices.  But forex is not an appropriate market in my opinion for the average retail tradee to make his fortune, the stock market is a better ground for that because it is not a zero-sum game at all times due to wealth-creation by listed firms. I have shown in another study that trading SPY has been very generous to gamblers with about 35% of them making a positive return in the presence of a low commission rate. Since the start of this year, the same kind of simulation shows that 20,000 long/short random systems in SPY for 10K starting capital fully invested at each position and 1 cent per share commission have the following net return distribution (nearly normal): 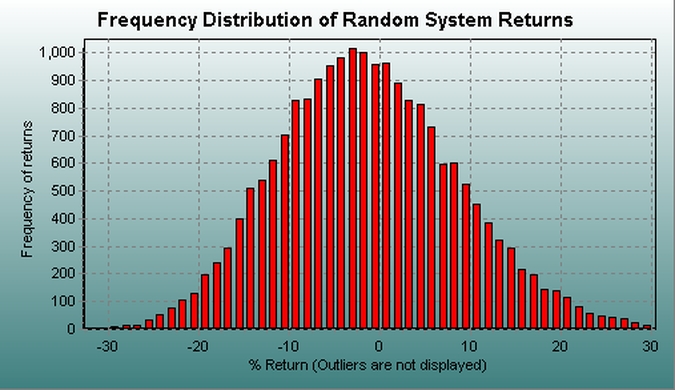 The mean return is -1.25% and stdev is 10%. About 43% of systems made a profit, 14% made more than 10% and even about 2% made more than the buy and hold of 20.35%. This is a completely different story than in the forex case. Commissions also impact win rates in the SPY case. For example, if commission is increased to 5 cents per share, then the percentage of systems with positive returns drops to about 25% and less than 1%, indistinguishable from 0, make more than buy and hold. Still this is a lot better than in forex trading.