The choice of data series to use in trading strategy development may impact results significantly. In this article we investigate the impact of dividend-adjusted data in the case of three strategies developed by DLPAL. It is shown that the choice of data series may lead to wide divergences in results depending on markets under consideration.

This subject is too broad and there are possibly no general rules or conclusions. Some markets are easier to deal with, for example forex, because there are no dividends and no splits. In the equity markets there are dividends and splits and in the futures markets there is drift induced in continuous series. The last two markets pose several challenges to trading strategies developers. Needless to say that some developers are not even aware of these problems. Specifically, some blindly believe that using adjusted data for splits and dividends is appropriate in the case of equities and some others think that continuous back-adjusted data in the case of futures are more appropriate. However, careful analysis may show that this is not the case.

In this study we consider three ETFs that distribute dividends but have not undergone any splits because we want to investigate the impact of the two different series in strategy development with DLPAL. The three ETFs are: SPY, DIA and TLT. We use unadjusted and adjusted series for dividends after we split the data history from inception into two samples, the in-sample and the out-of-sample, as shown in the table below:

Note that the in-sample and out-of-sample for TLT are reversed because of the length of history.

We use DLPAL S to develop strategies for the three ETFs in the in-sample to subsequently test in the out-of-sample. The aim is not to develop robust strategies but to determine how the choice of data series impacts the results.

DLPAL S identifies parameter-less price patterns in historical data based on user-defined performance criteria and risk/reward parameters. Unlike other program that use naive combinations of pre-programmed indicators stored in a database, DLPAL S identifies patterns in price action based on a proprietary unsupervised learning algorithm. Then, the performance of the patterns is evaluated and the output is a list of those patterns that fulfill the criteria. A strategy is developed by combining all patterns using the Boolean OR operator to minimize selection bias. Since all patterns have the same general structure and there is no selection from the results, data-mining bias is minimized. Note that the bias will never get to zero as it is inherent in any process of developing trading strategies, whether automated or manual.

The target and stop-loss percent for SPY were both set to 2.5% and for TLT to 1.5%. For DIA the target was set to 4% and the stop-loss to 3%. These were decided after using the price series analysis tool with in-sample data.

The minimum number of trades for each pattern was set to 30 ( > 29). The minimum win rate for long and short patterns for SPY and TLT were set to 66%. For DIA they were set to 50%. These were determined using the Win Rate calculator tool. All the other parameters were left at default values. Below is the DIA workspace: 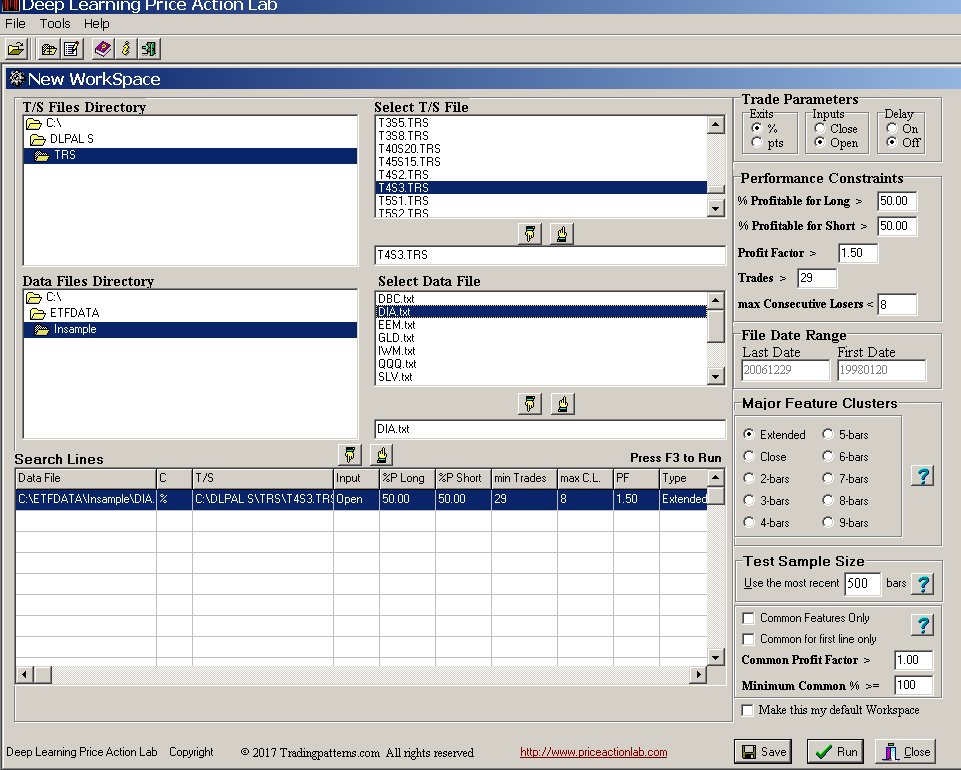 Results of the study

As a first step in the analysis, we are interested in the number of long and short patterns identified in the in-sample. Below is the relevant table with Long/Short signal counts:

A new pattern has emerged: in all three cases performance is lower in the out-of-sample for strategies developed with adjusted data.

Can we draw any general conclusions from the above study? Of course not. The intention was to show that in some cases strategies developed with adjusted data are inferior to those developed with unadjusted data and this is the important result. Quants must keep this in mind and test various options for their markets under consideration. Although dividend adjusted data are known to introduce drift, their use may result in better strategies in some cases depending objectives and structure of signals. In the case of DLPAL, it appears that for some markets, split-adjusted but not dividend-adjusted data are a better choice. Careful analysis may help in making the right choice between the two types of data series.

Thank you for your attention!

You can download a free two-month fully functional demo of DLPAL S from this link. For more articles about DLPAL and DLPAL PRO click here.