The Alpha is not in Alternative Data

Posted by Michael Harris on September 1, 2019

Alternative data is a new buzzword in the finance world. But is there any alpha in alternative data? The answer is no and here is why.

While alternative data can be very useful to banks for example for assessing credit risk, it is highly questionable whether they can provide alpha to hedge funds and sophisticated traders.

Before explaining further, below are some data about the growth of hedge funds using alternative data: 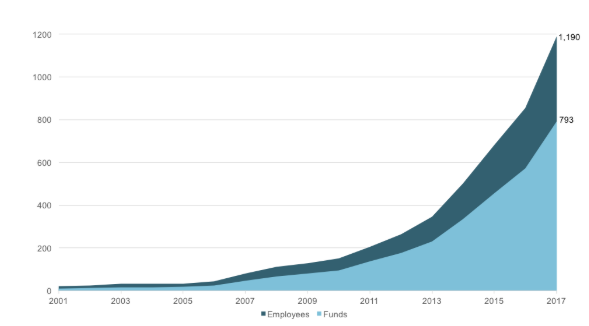 The growth in the number of funds using alternative data has changed to nearly parabolic recently.  There is a fundamental reason for that: quantitative easing has benefited buy and hold and tactical investing has grossly underperformed.

Along with the rising number of funds looking for alternative data in hope of extracting alpha from them, the number of data providers has also increased from about 50 before the Financial Crisis to more than 400 according to the same source as above.

But let us start with the basics that unfortunately many in finance often fail to take into account: Where does alpha come from?

Alpha does not come from data. Data have no money to give directly. People pay money to get data so that is a friction that decreases alpha.

Alpha comes from the pockets of counter-parties willing to lose

If in a market no counter-parties are willing to lose, or what is called dumb money,  and participants remain highly risk-averse and careful with risk management, there is not much alpha to realize. The best-case scenario is a reasonable risk-adjusted return.

Realizing alpha depends highly on a steady influx of unsophisticated and uninformed market participants that are willing to lose. No, this is not the 90s. It is not even the 2000s. The game has changed, noise traders have been mostly driven out of the market by algos and what remains is a clash between quants.

No matter how “alternative” the data are and no matter how sophisticated is the machine learning used to extract features from them, if no large pockets are willing to suffer wealth transfer there will be no alpha.

The Fed has been a large pocket willing to lose money (virtual money that is.) This has benefited buy and hold investors in the last 9 years as the beneficiaries of this wealth redistribution. Unfortunately, as the number of funds using the same alternative data vendors increases, the game is turning into a negative sum.

There is another thing: the more exotic the market, the less the liquidity. Getting in may be easy, but getting out may be hard unless a willing counter-party can be found.

I will only mention sentiment from social media. The sentiment indicators are constructed using sophisticated algorithms but you never know what the major players do about what they publish. They may be bluffing. In the finance world, positions often differ from the analysis made public.

I looked at some sentiment indicators not long ago and they were noise. Naive analysts found alpha in a backtest due to an uptrend in the market during a specific period and data-mining bias. Monkeys with darts could do better.

Some if not many of the results using alternative data suffer from data-mining bias and even data-snooping bias. The worst case is look-ahead bias.

This new buzzword “alternative data” reminds me of the “systematic trading” buzzword invented in the late 1990s by the industry. The promise that systematic trading is the solution drove many traders to ruin. That was too good to be true.

Alternative data is just another level of wealth redistribution, which is what financial markets are. Some very sophisticated or lucky users may benefit, but the majority will lose as it is the norm.

If you found this article interesting, I invite you to follow this blog via any of these methods below:

If you have any questions or comments, be happy to connect on Twitter: @mikeharrisNY

Market signals from systematic strategies are offered in our premium Market Signals service. For all subscription options click here.