Another Tail Event That Probably Does Not Mean Much

May crude oil contract prices went negative Monday, April 20, 2020, due to technical considerations. The plunge in negative territory was a tail event that according to models has zero probability. Models diverge from reality. Respect for the traders.

This is another chart below to add to your long list of tail events that have occurred recently due to the pandemic. 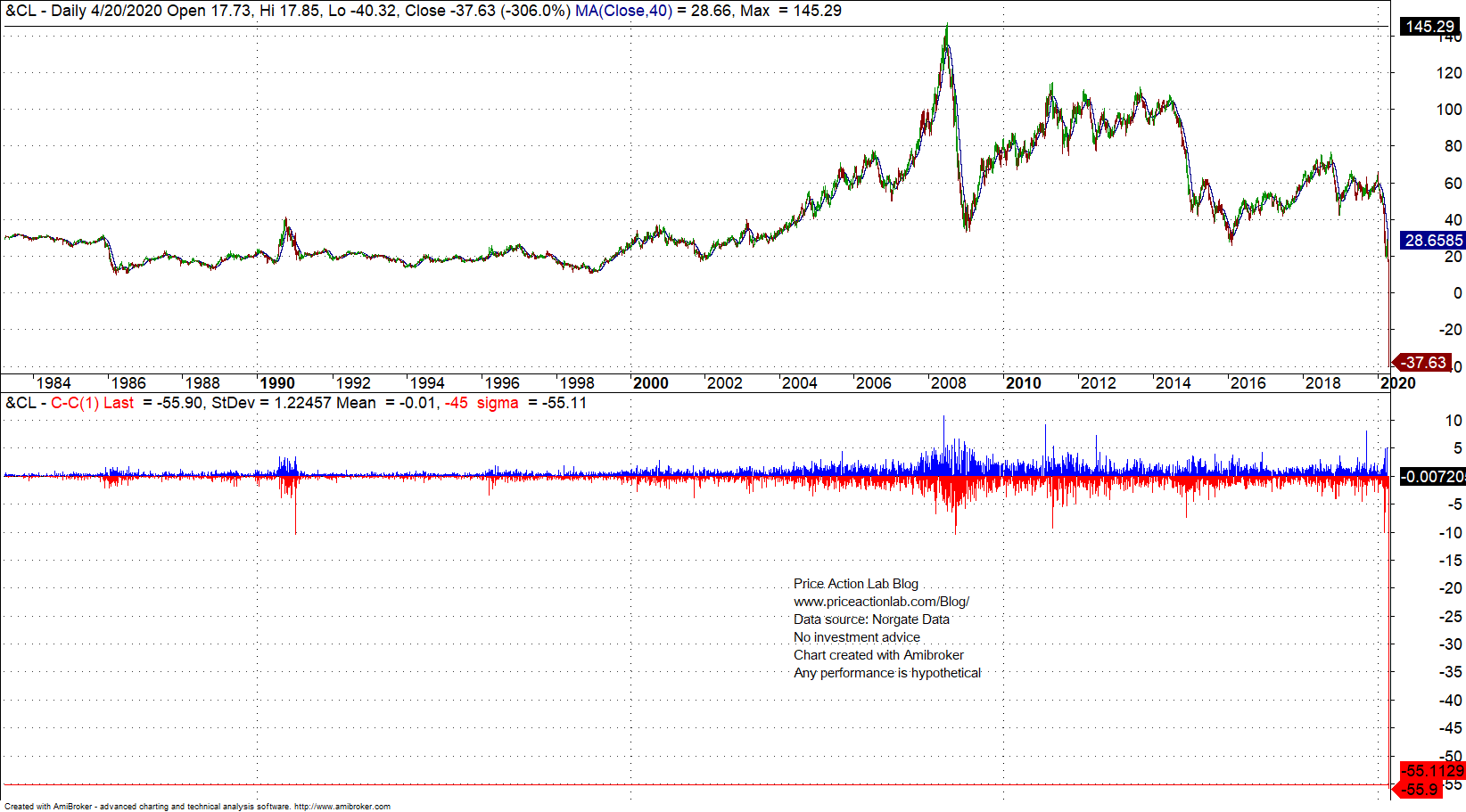 I used first differences, i.e., closing price changes, instead of returns  because they are more popular in commodities markets.

According to the sample of front contract changes and assuming that rollovers have contributed to an error with approximately zero mean since 1983, the move yesterday was –45 sigma.

Note that this is the sigma of the sample since the actual population distribution is probably unknown or it does not even exist.  We are not using the sigma here for any inferences, only in a descriptive sense.

As mentioned in Twitter by N. Taleb , the models point to zero probability for this event because they cannot accept negative prices! Therefore, once again, an event has occurred that popular models would flag as impossible.

Some comments below because many misunderstand commodity markets and  their trading (although I think the bond market is top on the list.)

Commodities markets is where speculators assume the risk of hedgers for potential profits. When speculators are correct, they make money and when wrong, they lose money. But in both cases the hedgers are protected and as a result, the existence of speculators is essential for the markets. Without speculators, there can be no price discovery and hedgers are not able to operate. As a result of not being able to control risk, few want to be producers and the state has to assume that role.

Usually speculators rollover when contract volume changes from the front to the next contract and in this case this occurred last week around Thursday. In fact, the most active contract is June 2020 for crude oil now. The open interest counter-parties were probably long commercials for taking delivery and short producers. Few speculators were willing to assume risks in a front contract and therefore prices plunged. Commercials will get delivery at a price close to the June contract depending on when they bought their contracts. Those that needed desperately to get out of the market because they could not store the commodity, they paid some speculator (probably a producer) a large sum of money to close their position; the speculator went long (essentially flat) and they went flat. Probably producers benefited yesterday. I doubt that any sane speculators were active in this game.

Reminder that futures trading is a zero-sum game before commissions and slippage. Any sensationalism in main street media about this market development is like always driven by another agenda.

This is what happens when speculators are not present in a market but only commercials and producers. Respect for the traders.