Market timing has worked well in the U.S. stock market due to favorable properties of price series but the probability of ruin is much higher than most market timers estimate.

Arguments in favor of market timing usually rest on the existence of the momentum premium anomaly and empirical analysis that shows it can be captured with relatively simple strategies, such as moving averages or the price rate of change. But these claims may be naïve because in addition to the limitations of the analysis they conflate state space and time domain probabilities

In my paper, “Limitations of Quantitative Claims About Trading Strategy Evaluation“, I show an example of two return sequences that have the same win fraction, average and standard deviation but completely different risk of ruin properties:

Both of the above simple returns sequences have 0.7 win fraction, 0.4 average and 0.0967 standard deviation. However, when analyzed in the context of risk of ruin, they are quite different: the second sequence has a maximum drop of 33%, which is a loss level that for many funds and professional traders equates to uncle point.

A serious error market timers commit is the belief, or maybe the hope, that future returns will exhibit the same dynamics in the time domain as in the past. However, this is possibly naïve thinking; the possibility of excessive consecutive losers is real and because of that, the probability of ruin is not zero. If the probability of ruin is not zero, then ruin will eventually occur. Market timers who are aware of this problem hope that they will manage to retire before they hit uncle point. The reality is that one cannot know the timing of ruin. In this respect, some market timers are in reality gamblers.

As I note in the paper quoted above, so far the U.S. stock market has exhibited certain characteristics in the time domain that have favored market timing, such as V-bottom recoveries from bear markets and crashes, as for example earlier this year, and absence of protracted periods of whipsaw. This is one reason simplistic or pedestrian strategies, such as a crossover of price and a 12-month moving average have worked well, as it is shown the chart below with SPY ETF data from inception to 09/25/2020. 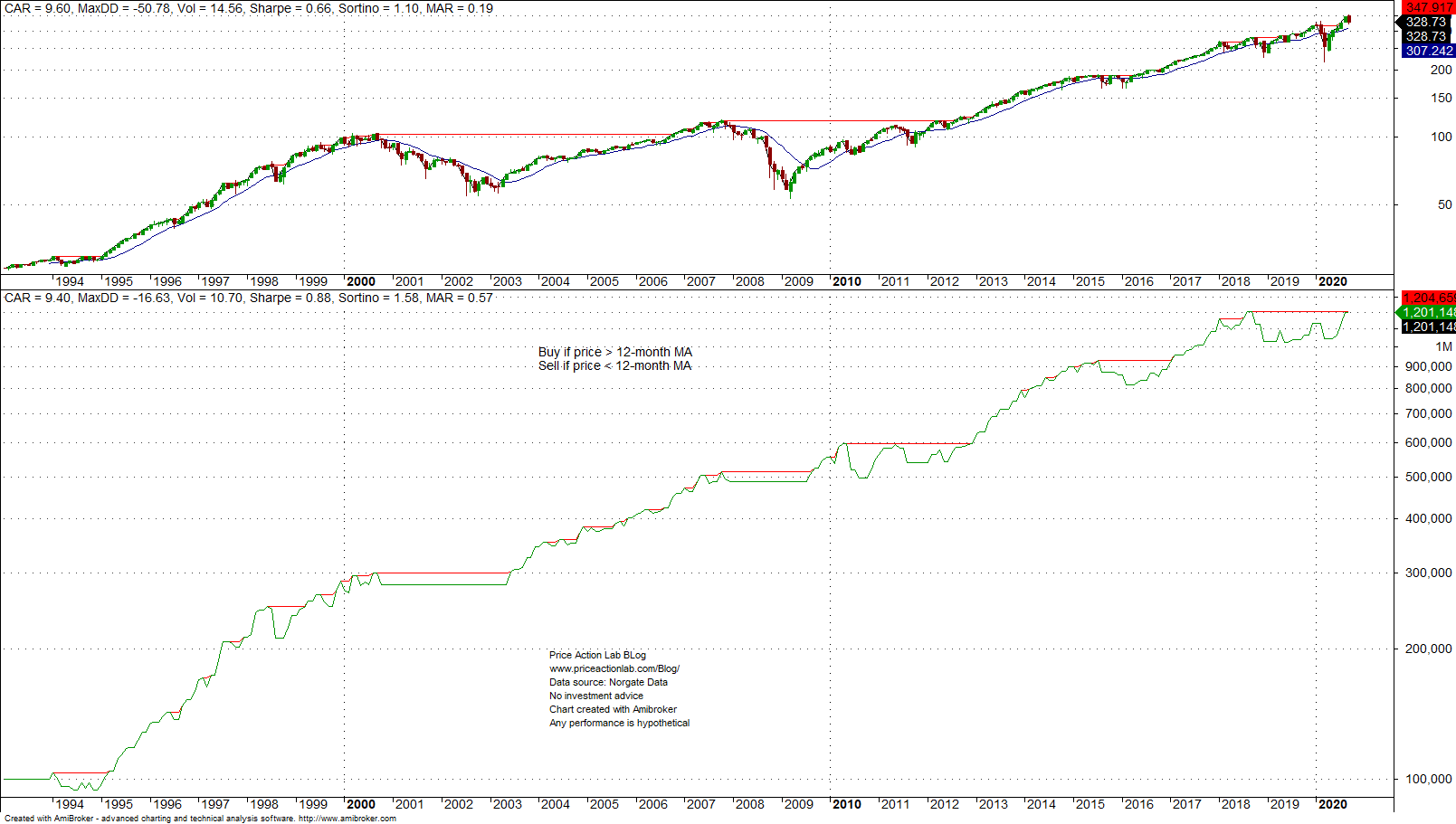 However, in other markets unfavorable market conditions have already developed and pedestrian momentum strategies have incurred large losses. In the paper quoted above, I have an example based on the Emerging Markets ETF (EEM), which has generated a five year whipsaw period. In that market simplistic market timing strategies have already failed. The chart below shows the performance of the same moving average crossover as above, in monthly timeframe, applied to EEM in the period 01/2011 to 12/2016. 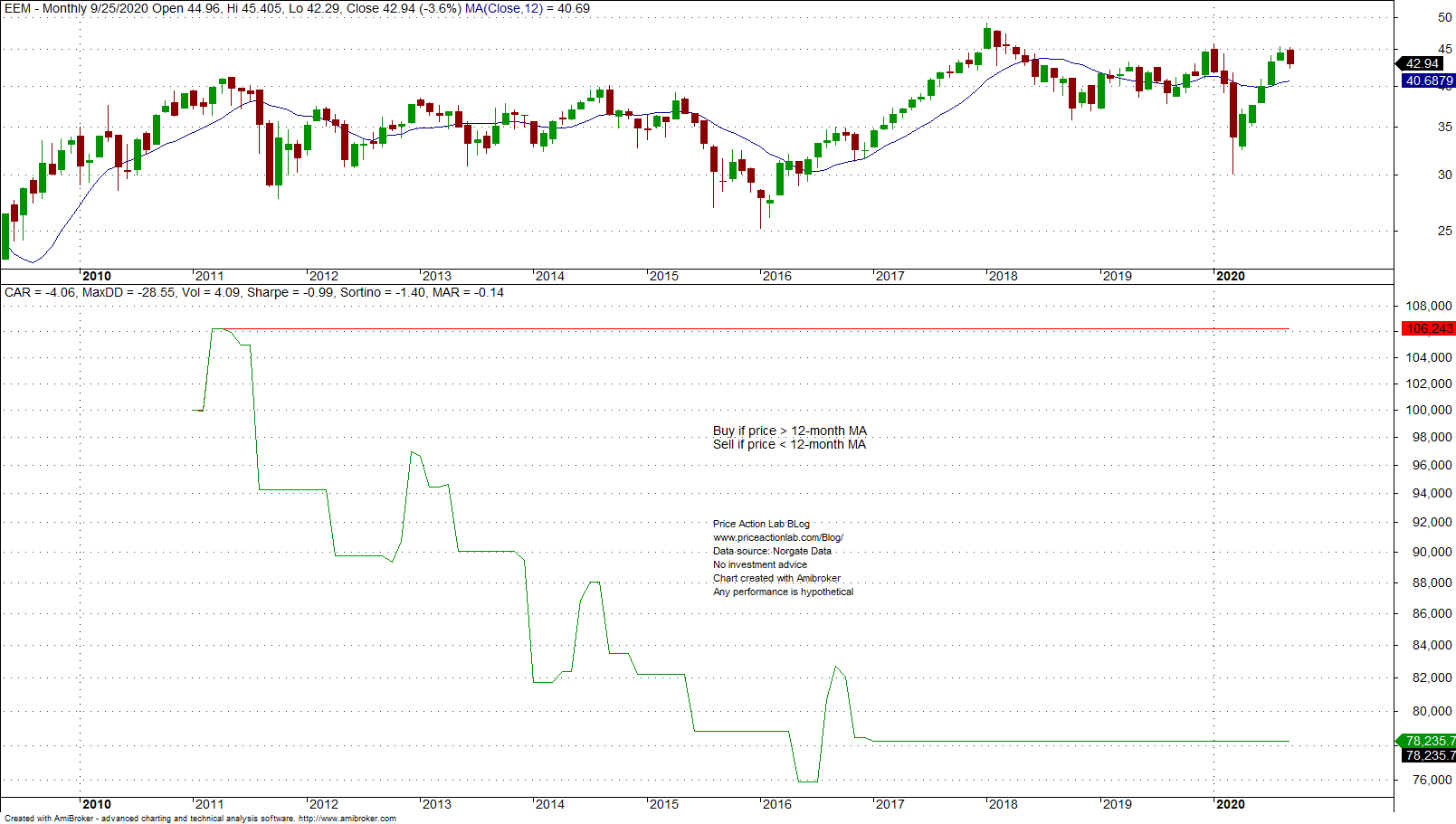 Due to extended sideways price action from 2011 to end of 2016, the simplistic momentum strategy has a 29% drawdown and MAR is negative in that period due to negative annualized return of about -4% (backtest.)

But there is another error that some market timers make, which is the lack of understanding of backtesting. Here, I will only remind that backtesting cannot say anything about which strategy to use but only which strategy to reject at the risk of a Type II error (missed discovery.) Type I errors (false discoveries) are conditioned on past data and associated expected returns may have large variance (bias-variance problem.). In other words, when looking at some of those popular books that describe various investment schemes based on momentum and other pedestrian market timing schemes, chances are high that they will fail in the future when the conditions are right.

Finally, note that market timing is an anomaly and must be treated as such. Potential gains are high but losses can be devastating. Only a naïve market timer should expect to profit longer-term from simple models that everyone else is using. There is no way for the market to deliver profits to all those participants and conditions will change so that at least some of them turn to losers.

Edit 09/27/2000 due to a comment in Twitter: Nowhere in this article I claim that market timing should be abolished. This article was about the potential risks of pedestrian and simplistic market timing methods that rely in historical features of price series that have been favorable so far for these methods. In fact, all traders are market timers and even passive investors are indirect market timers due to rebalancing of indexes.