What Some Permabears Fail to Understand

Posted by Michael Harris on February 3, 2021

Permabears attempt to confirm their bias about a bubble formation and a top in equities with all sorts of claims about assert prices being too high. However, they fail to understand that price is not the only parameter that determines whether there is a bubble.

As long as I can remember in the last 30 years, each time the S&P 500 made all-time highs, there were calls for a bubble market.

In my opinion, most permabears are victims of the old practice of technical analysis that attempts to analyze market by looking at price and volume. Most permabears try to confirm their bias about a bubble by technicals and/or fundamentals, or even a combination of both.

There are bubbles in the markets. The dot com irrational exuberance is an example. However, price alone does not indicate whether there is a bubble because it is usually a combination of many parameters.

For example, what most permabears miss is that half of the total return of the S&P 500 since 1990 has been due to dividend reinvestment, as shown in the chart below. 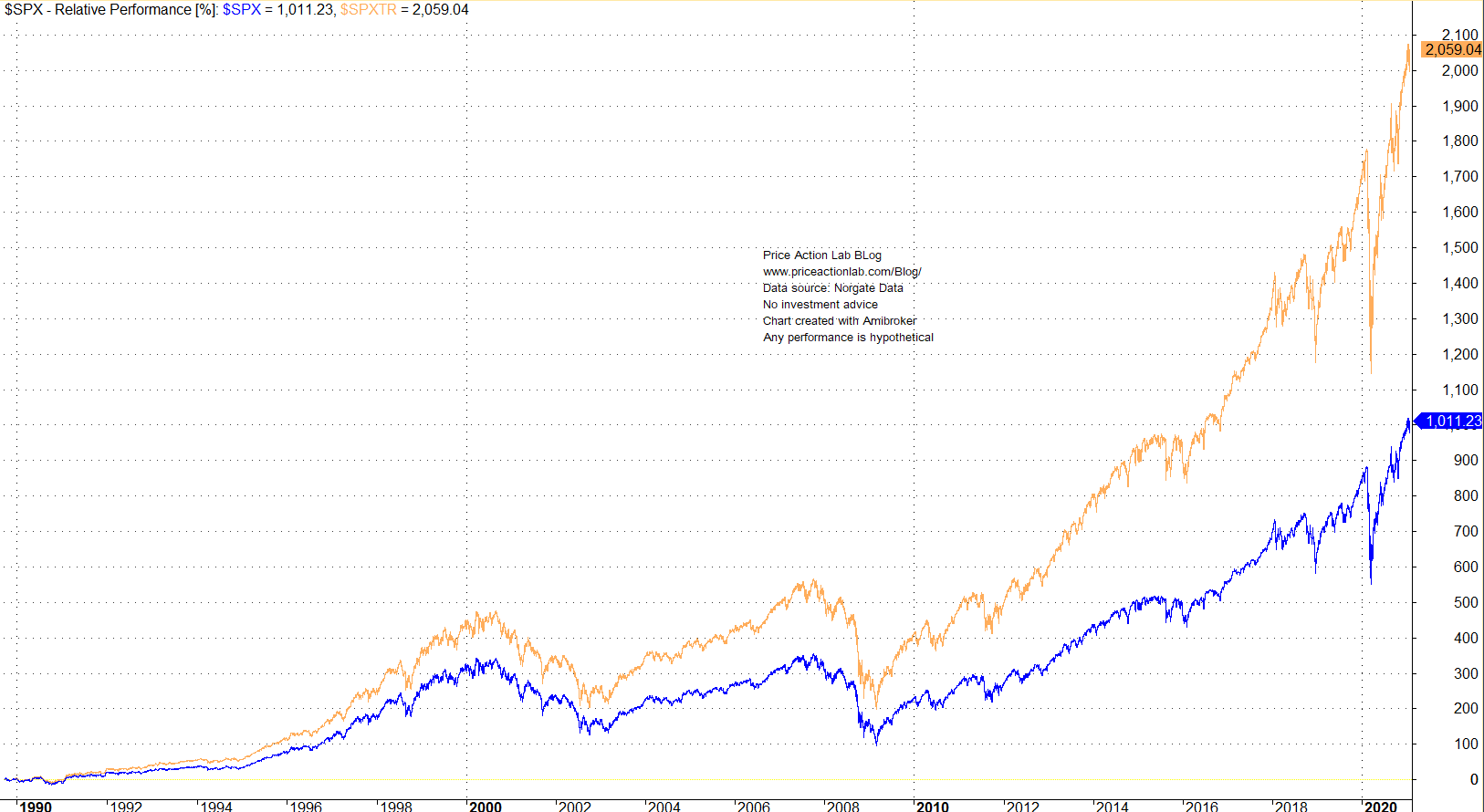 The S&P 500 has risen about 1011% since 1990 but total return is about double that at 2059%. This means that half of the total return has been generated by companies sharing profits with investors in the form of dividends.

Although since 2010 the contribution of dividends to total return has been reduced to about 25%, it is still a substantial effect. What else is affecting price levels? Below are some examples:

The last parameter, globalization, is very important. US companies were well positioned to take advantage of globalization and increase their profitability. That contributed to higher price levels that are justified based on fundamentals.

Currency rates are very important. After intense lobbying in the early 80s by U.S. multinationals such as Caterpillar (CAT), there was an agreement in mid 80s to lower the value of the U.S. dollar, a.k.a. the Plaza Accord. 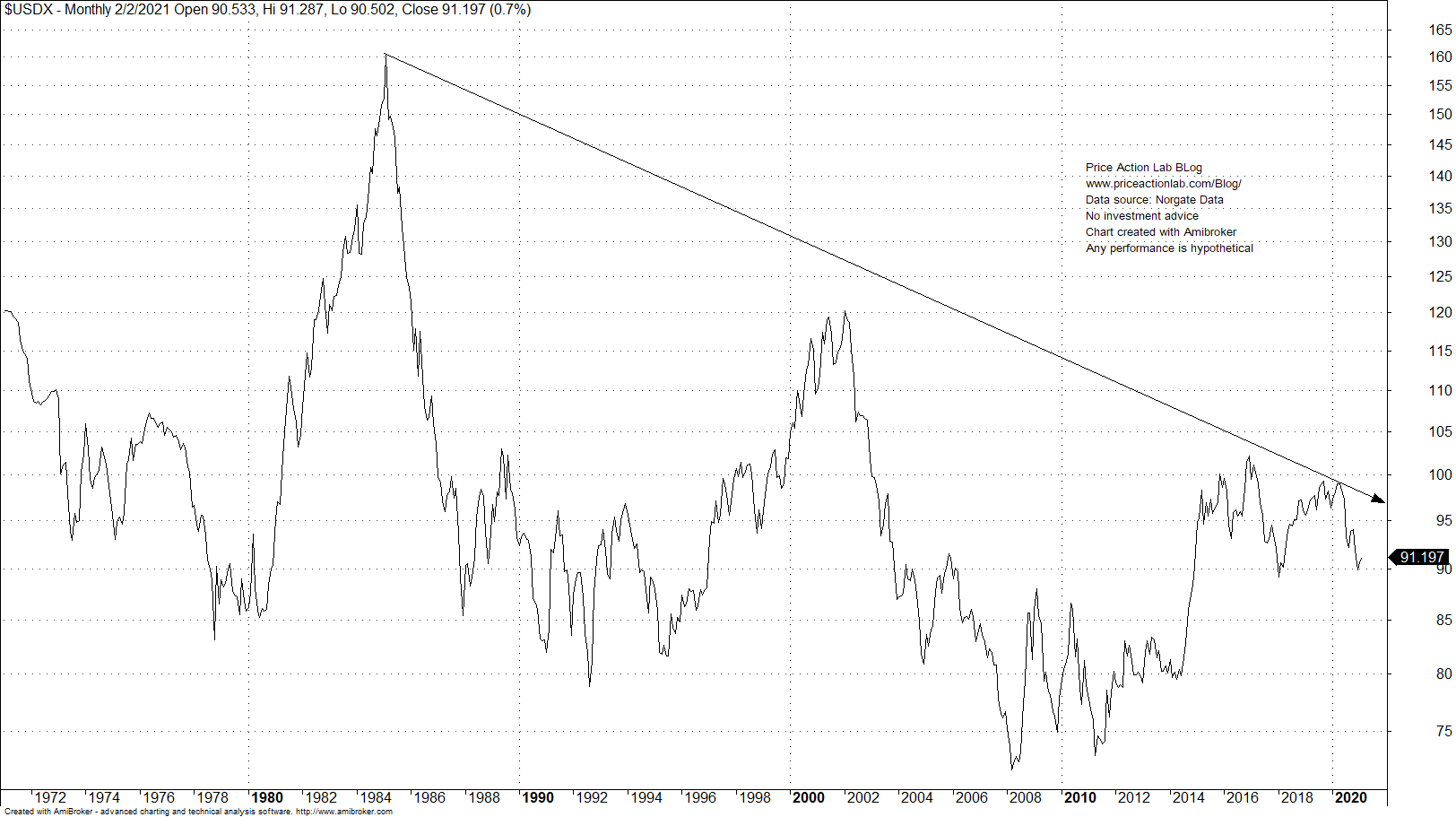 Despite the swings after the bottom in the dollar index in early 90s, in my opinion the Plaza Accord is silently in effect despite the Louvre Accord that followed in 1987 that was probably a temporary remedy to curb the dollar decline. The US dollar is a highly manipulated currency to guarantee export of inflation from USA and higher asset prices. If the central bank leaves the dollar free, the Dollar Index may surge towards 120 and stocks will adjust accordingly because multinationals gains will be adversely impacted among other things. See how the 2000 top and subsequent bear market coincided with a rise in the Dollar Index in the above chart. In 2008 it was a different situation because the cause of the top was the real estate bubble.

Inflation is also a major factor in prices. Then, productivity gains, new technologies and investor expectations all play a role.

No doubt, there may be a degree of irrational exuberance each time prices reach new highs. However, new highs do not mean there is a bubble as some interpret them to be. One must look at relative impact of the drivers of prices but that is mostly an exercise in futility due to the high complexity of the price generation process. A simpler and better way was invented by finance: consider log returns instead of prices. Below is a chart that shows the difference in log prices for three different lookback periods: 750, 1250 and 2500 days corresponding to about 3, 5 and 10 years, respectively. 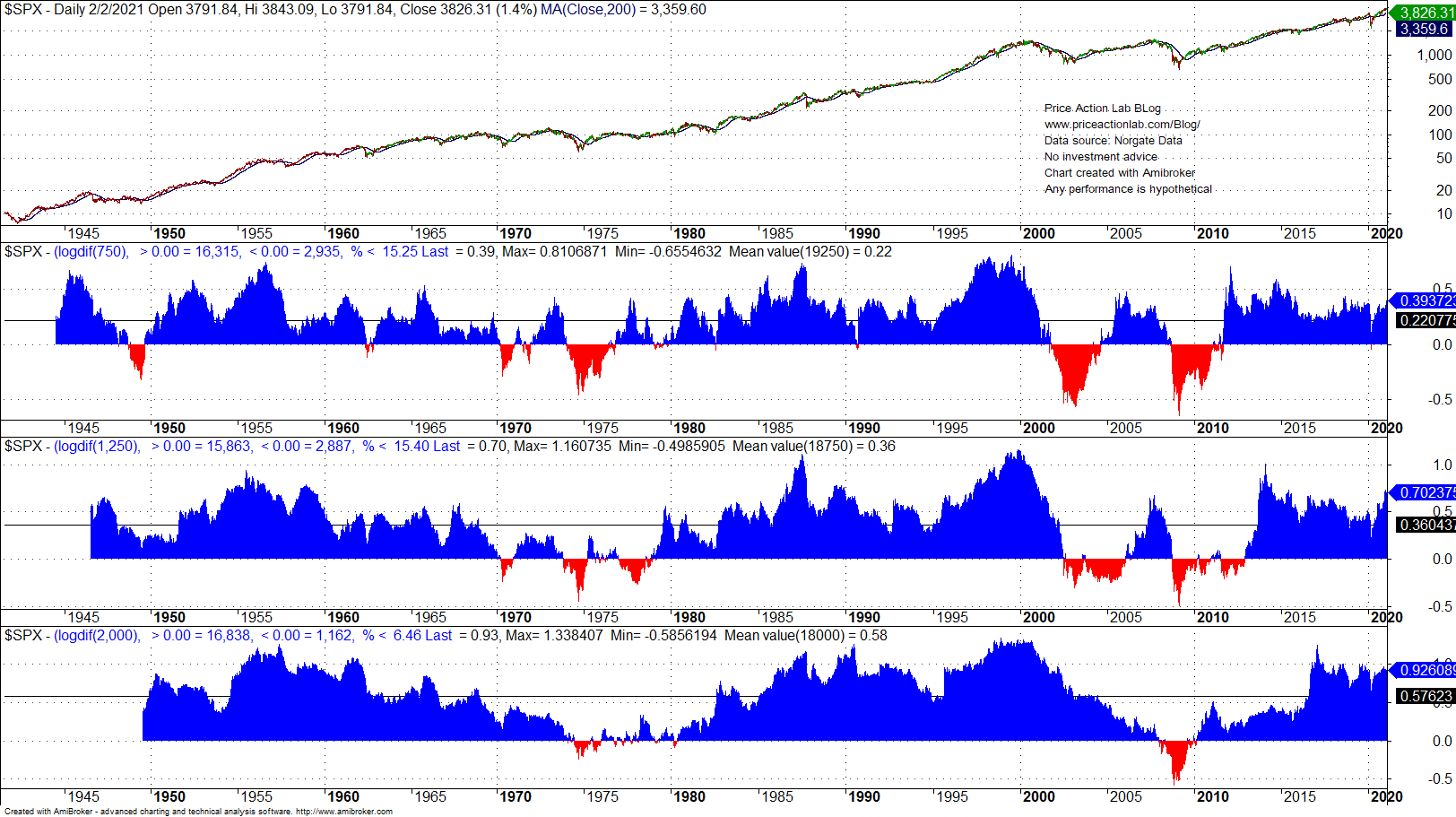 It may be seen that by all three measures above, current market is not a bubble. It may also be seen that before the 1987 crash and the 2000 top, the difference in log prices in the lookback periods considered above reached high levels. Note that the 2007 top was formed due to a white swan rather than a bubble. The top of 2000 is shown as the worst in all three cases.

What is actually happening in the financial analysis sphere is that many permabears confuse cause and effect and attribute post hoc value to analysis that in their opinion indicates a bubble when the market drops due to unexpected events. Bubbles are rare and unexpected events are more frequent, which may be non-intuitive.

In conclusion, anyone who claims that a market is a bubble because prices are too high is focusing on the wrong indicator. It is the rate of change of prices (velocity) over longer periods of time that in some cases may indicate whether there is a bubble or not, but in conjunction with the level of the dollar and other contributing factors. This is a difficult subject and drawing lines, looking at chart patterns or a few fundamentals will only be useful to confirmation bias.