In the last few years the term non-ergodicity has found its way in popular articles about investing. In many cases, this term is used by people who don’t understand probability theory but their aim is to attract attention using what can be considered as another buzzword.

Earlier this week there was an article in New York Times opinion section with the title “The Risk-Return Trade-Off Is Phony”. The article is behind a paywall and I won’t provide a link to it here. The article starts as follows:

Conventional wisdom in investing says there’s a trade-off between risk and return. To make a lot of money, you must take the chance of big losses. Play it safe and you’ll most likely have to settle for meager returns.

The article continues to argue that lower risk can increase returns. References to non-ergodicity are made in an attempt to justify the argument.

This is nothing new but the trade-off is real and structural. Making a lot of money while taking small risks (maximum 2% of bankroll for example) was the main thesis of some market wizards, as detailed in bestselling books about them. Risk cannot be destroyed but transferred. Actually this is the main idea behind zero-sum derivative markets: hedgers transfer risk to speculators who are willing to assume it in expectation of large profits. If the speculators are correct, they make money and if they are wrong they lose while the hedge in both cases hopefully works out.

However, in order to increase wealth accumulation from a strategy that assumes lower risk, leverage must be used, which essentially increases risk. Therefore, the trade-off between risk and return always applies at some level because it’s structural in the markets. Because someone conceived a way to make money with less risk it doesn’t mean that the trade-off doesn’t apply. This is analogous to arguing that planes falsify the law of gravity. In fact, planes are designed to operate under gravity. In the same sense, finding a strategy that profits with lower risk is equivalent to finding a better way to deal with the trade-off between risk and return. So I hope you see why the statement in quotes above may be a strawman.

A justification of the attack on risk-return trade-off is often offered by invoking a probability and statistics concept known as “non-ergodicity“, which is, supposedly but not technically in most cases, supported by some references to trivial but often not so relevant to real world math puzzles. This is what was done in the New York Times opinion article.

These puzzles refer to some extreme risk-return situations with asymmetric payoffs and convey a false account of the risk in the markets. In the quoted New York Times article a reference is made to dice rolling with extreme asymmetric payoffs. Then another reference is made to the article by a well-know quant, Corey Hoffstein, You Are Not a Monte-Carlo Simulation [1]. In that article the following question is posed:

Let us make this clear upfront: Corey Hoffstein never made mention to non-ergodicity! The point made in that article is that when there is possibility of catastrophic event, a 95% loss, the experience in the time-domain of an investor may not be the same as the experience of some ensemble of investors. This is a perfectly valid argument and well explained in the article Corey Hoffstein wrote.

Corey Hoffstein was careful not to use non-ergodicity, which is a notion not many of those who use it understand. This is important and I’ll explain why.

I have reproduced a few of the simulations Corey Hoffestein used in the article [1]. Here is a path of an unlucky investor in the proposed investment scheme above. 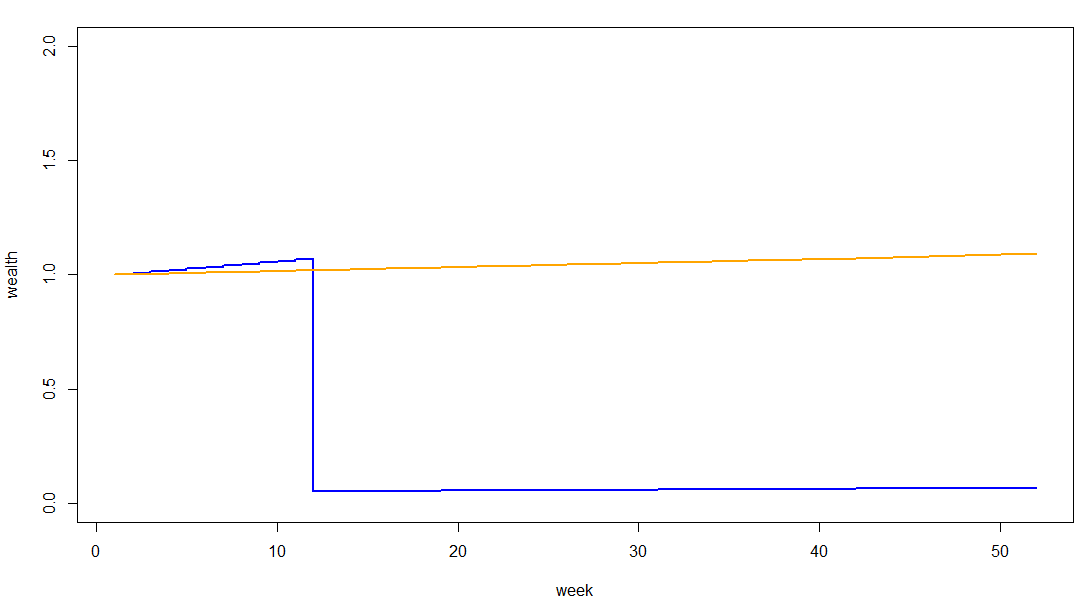 Fig 1. Wealth ensemble average vs. wealth in time-domain for a random path.

The orange line is the average wealth of a large number of investors and the blue line the wealth of one unlucky investor who was hit with a -95% loss.

What is the probability of an investor ending up with a loss in 52 weeks when investing in the scheme? As it turns out, it is about 0.22, or 22%.

Below is a graph of 20 investors with varying starting capital between 1 and 2 units for the purpose of illustrating the random process. 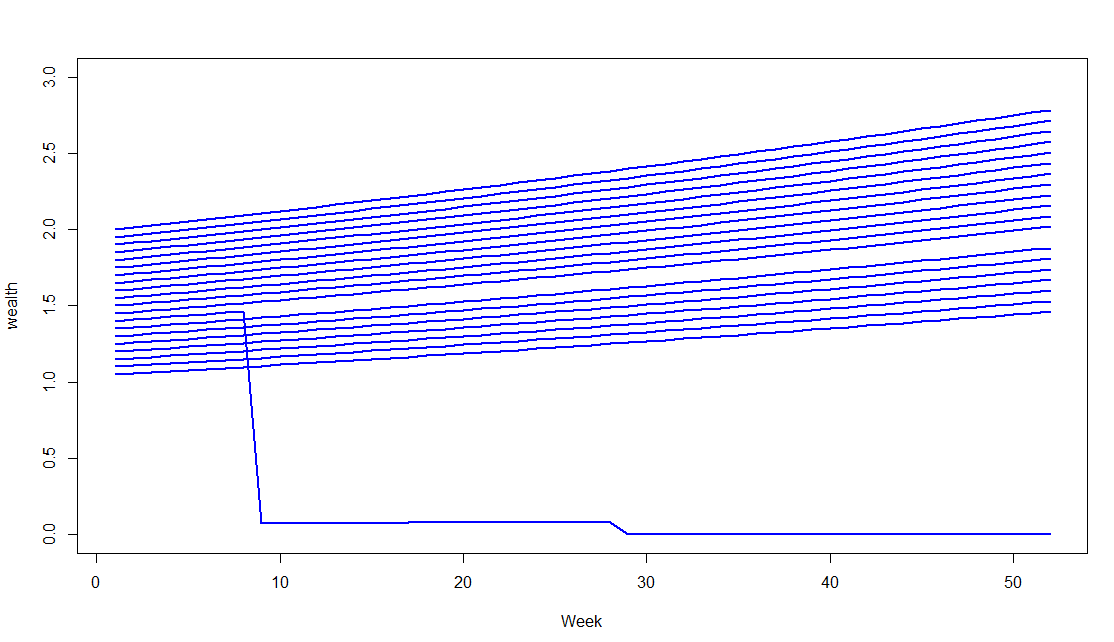 One unlucky investor is hit with a 95% loss and the bad luck continues with a second one. The wealth of the other19 investors keeps growing.

Would you invest in a scheme that has 22% probability of a nearly total loss?

Most people wouldn’t invest unless the payoff was significantly higher. Even if they invest, they would do that with a small allocation, like a lottery ticket purchase.

Therefore, although it is fine to use extreme examples based on coin tossing and rolling dice with highly asymmetric payoffs just to make a mathematical point, in my opinion those do not represent reality of investing and behavioral patterns of investors for most part and in liquid capital markets.

Corey Hoffstein makes the point of diversifying in time because we cannot invest in the average. If investors keep playing this game for 10 years (520 weeks), ruin probability is significantly increased, as shown below for one investor path. 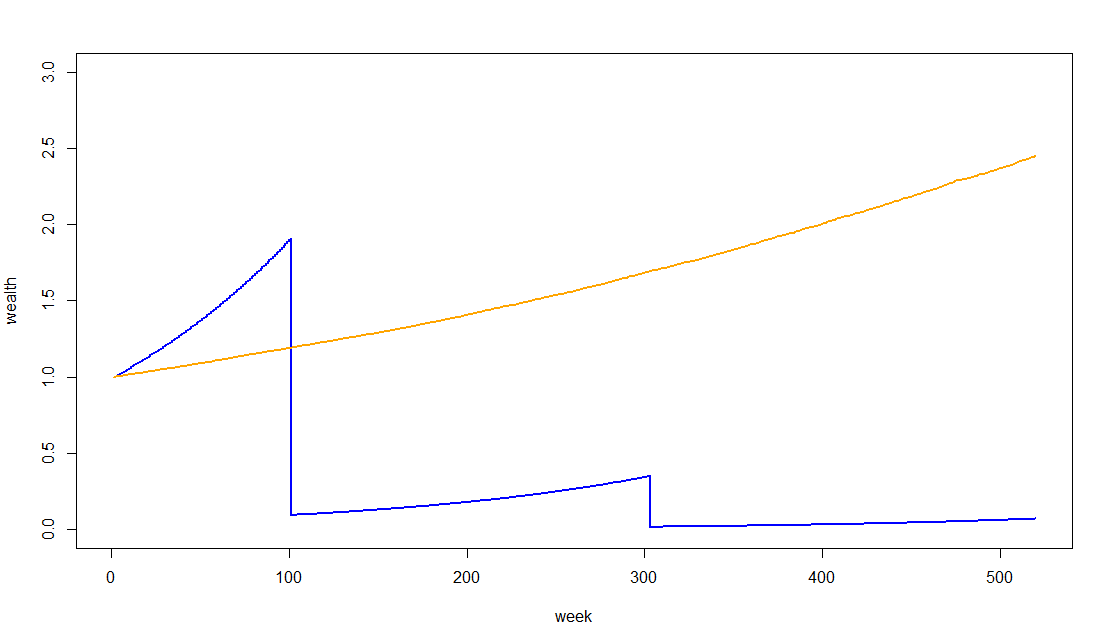 Fig 3. Wealth ensemble average vs. wealth in time-domain for a random path.

Although the average wealth of investors keeps growing (orange line), some unlucky investor is ruined.

So, let us go back to one of the main points: what is wrong with using non-ergodicity term, which I call a buzzword?

Lets us first look at the definition of an ergodic process. [2] [A process] is ergodic if time averages equal ensemble averages (i.e. expected values). [2]

So let us next extend Corey Hoffstein’s simulation for 7000 weeks. The orange line shows the average wealth growth of 100,000 investors over time in log scale.

The average grows although many of the investors, in this case 100,000 were used in simulation, are hit by a 95% loss. But as time increases more and more investors are getting wiped out no matter how much wealth they have accumulated over time. Some are lucky for a while and manage to recover for a period of time and this is why the average is volatile. But eventually they are all ruined; it’s inevitable. In fact, there is no way for the average to keep increasing since all time domain paths go to zero as time increases.

In some articles and papers, they show a non sufficient sample and because the average wealth is still growing they claim investors lose because of non-ergodicity. The trick is to conceive a seemingly simple game where the wealth average converges very slowly to zero and then show a small sample where it grows fast, or even exponentially, while also showing a single path in the time domain that collapses to zero. Appeal to non-ergodicity is used in a form of red herring fallacy.

For example, the occurrence of a catastrophic electromagnetic pulse, or solar flare, may render networks inoperable for an extended period of time, maybe even years, and cryptocurrencies could drop to zero. Is this due to non-ergodicity? I cannot argue about it because it’s a different perspective from what I’ve learnt nut probably more correct.

If someone invests in a game, which is even ergodic, and loses because of not being able to continue after a bad streak or drawdown, also known as an uncle point, this does not mean the process is necessarily non-ergodic but that the investor did not calculate risks correctly to determine the capital requirements to cover potential losses and stay in the game. Lower risk may be required to avoid uncle point in investing; that does not mean the risk-return trade-off isn’t true. Assuming even lower risk will certainly impact returns. Increasing returns requires leverage and thus more risk.

When some people make references to non-ergodicity, they may not fully understand what it means. In most cases in investing, losses are not due to non-ergodicity, even if it’s present, but due to insufficient capitalization to deal with equity volatility, market swings or change in correlations of assets in diversified strategies. In fact, non-ergodicity is more of a buzzword than anything with real meaning for investors. More importantly, many articles and papers that claim to include examples of non-ergodic processes fail to meet the formal definition of the process. The risk-return trade-off in the markets is structural and lowering risk may be in certain cases a better way of dealing with it.

[1] Corey Hoffstein, You Are Not a Monte-Carlo Simulation. [2] Papoulis, A., Probability, Random Variables, and Stochastic Processes, 1965. McGraw-Hill, p. 328.

10% off for blog readers and Twitter followers with coupon NOW10