Never start a fight with the FED because you will lose

The lesson is never start a fight with the FED. When it comes to bonds, the FED is the boss, not some bond fund managers who are just the humble servants of the FED although they often commit the original financial sin of trying to overthrow the boss.

“Never listen to investment manager celebrities, like those who were trying to convince us all year long that QE would cause a bond market collapse. They were actually getting into a fight with the FED and the lesson is never start a fight with the FED because you will lose.”

Actually, they tried to start a fight with the FED again. Probably they thought that Mr. Bernanke will get scared hearing their convoluted arguments for a rise in inflation and a collapse in bond prices and rush next day to call a meeting to raise interest rates so that their position will generate profit. Instead, the only thing the FED could do is mention that QE3 may be along the way. This is the result based on the 10-Year Note yield chart: 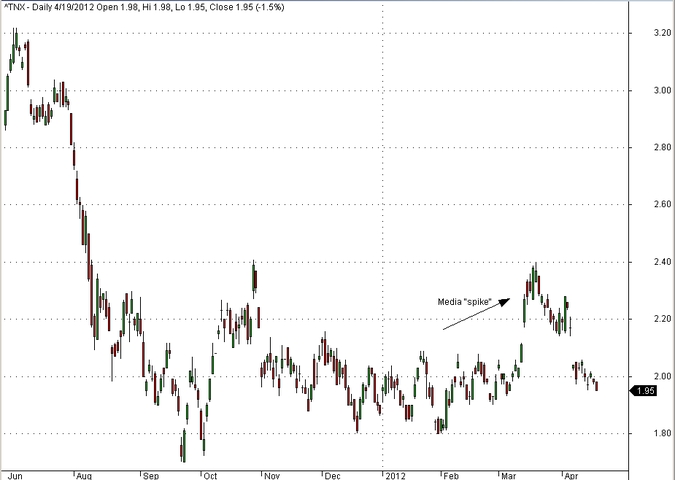 After what the financial media called “a major spike in yields”,  bond prices went straight up and yields collapsed, literally, from a high of 2.40% for the 10-Year Note, back to below 2% yesterday. So much for some technical analysts calling for a major bottom in yields based on some dubious patterns. This is what we got instead: bonds defied classical technical analysis, as I warned 10 days ago.

Bond prices will go into a downtrend at some point. The key to understand here is that this will happen when the FED thinks it is appropriate to happen. This are not times of an overheated economy where the market decides the long-term interest rate. This is a struggling economy where the FED pins the long-term interest rate at whatever level it wants. I wonder why some highly paid fund managers do not know this but instead choose to fight the FED and lose.