Some traders base their trading decisions on the fallacy of the maturity of chances, also known as gambler’s fallacy. This fallacy is the expectation that the market will correct when indicators like the Relative Strength Index (RSI) assume extreme values. However, any extreme values of such indicators just measure the strength of gambles’s fallacy and not any propensity of the market to decline, as the study here shows.

The fact is that the market does not have to correct substantially for indicators like the RSI to fall below overbought territory. This is easy to show mathematically. Thus, such indicators describe only overbought/oversold conditions in the context of momentum and they should be used in conjunction with other indicators. 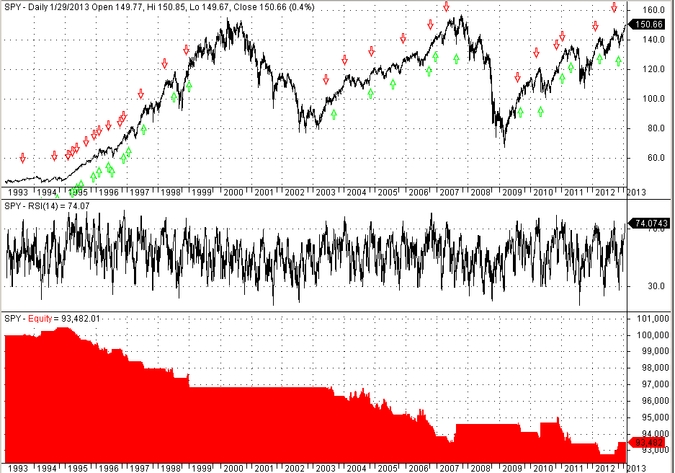 Above the entries (red arrows) and exits (green arrows) of the trading systems are shown for SPY since inception. The equity curve shows a steady decline. As it is shown in the backtest report below, the win rate of this trading system is only 23.08% and the profit factor much below 1 at 0.31. Thus, the system should be actually reversed, i.e. to enter long positions when the RSI(14) is greater than 74. This is because, the RSI(14), contrary to what some may think, measures momentum and not overbought/oversold conditions:

It is shown on the above backtest report that out of the 29 trades meeting the conditions, 20 turned out to be losers.

The results how 5 losers and just 2 winners for a win rate of 28.57%. The sample is small but it agrees with the SPY results.

The moral of the story is that although the RSI is a useful indicator for measuring momentum, one should be very careful not to become a victim of gambler’s fallacy when it is used as an overbought/oversold indicator. Also, it is better to use the RSI in conjunction with other indicators.