Posted by Michael Harris on February 7, 2014

A long-only position trader in SPY must be very unlucky or must trade worse than random to lose money. This is what a randomization analysis using SPY historical data from inception shows. Long positions held for an average of 5 weeks, initiated and exited by tossing a coin, never lost any money and maintained a respectable minimum net return as a simulation of 20,000 random sequences indicates.

I am very pleased to have developed a unique tool that performs a random simulation of trading systems based on the toss of a coin with adjustable bias for the purpose of analyzing the potential profits from various markets and timeframes and evaluating the significance of trading system and investment adviser performance. I have already used the results of this tool in previous posts where I have shown that making a profit in intraday forex and E-mini futures trading is extremely hard if not impossible. This is partly due to the negative-sum game nature of those markets. Also, in the analysis of the minimum return required for rulling out luck in SPY trading for 2013. Equity indices like the S&P 500 index exhibit an inherent longer-term upward bias and they are a positive-sum game when trading along the long direction. This fact has deceived some technical analysts and fund managers to believe that it is their method that is responsible for their performance where in fact it is the market bias that rewards long-only traders.

Below is a screenshot of the tool I have developed that shows the result of 20,000 simulations of long-only trading system in SPY with data since inception. Long positions are entered at the close of a day after a coin is tossed and the outcome is heads. The positions are exited when the outcome is tails. The coin is biased towards heads to reflect the market bias and the average holding period of the long trades is about 100 days, or 5 weeks. 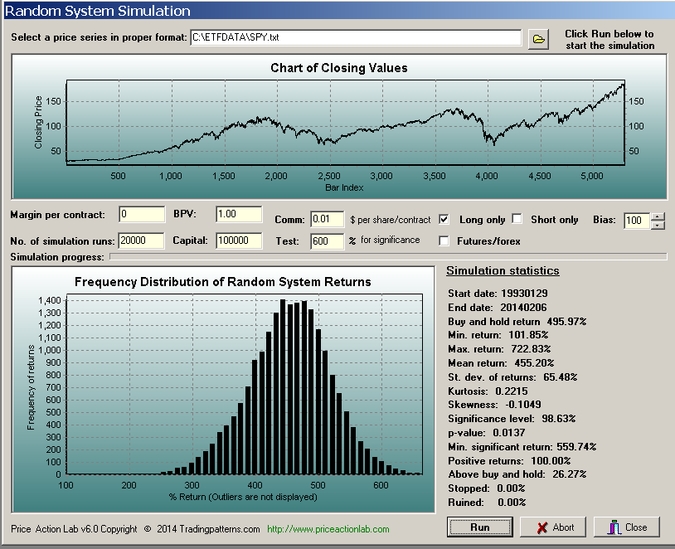 The simulation was performed for $100,000 of starting capital and 1 cent per share commission. The resulting 20,000 random systems are fully invested at each position. The simulation statistics show that 100% of the random systems gained and 26.72% managed to make more than the buy and hold return of 495.97%. The distribution of net returns is nearly normal with a mean of 455.20% and a standard deviation of 65.40%. The kurtosis and skewness are small.

The above simulation tells us that a random long-only position trader in SPY with an average trade holding period of about 5 weeks has never lost any money. On the contrary, a minimum return of about 100% was achieved and the maximum return is about 722%.

On the other hand, the returns of frequent short-term traders are governed by a power low distribution, as shown below: 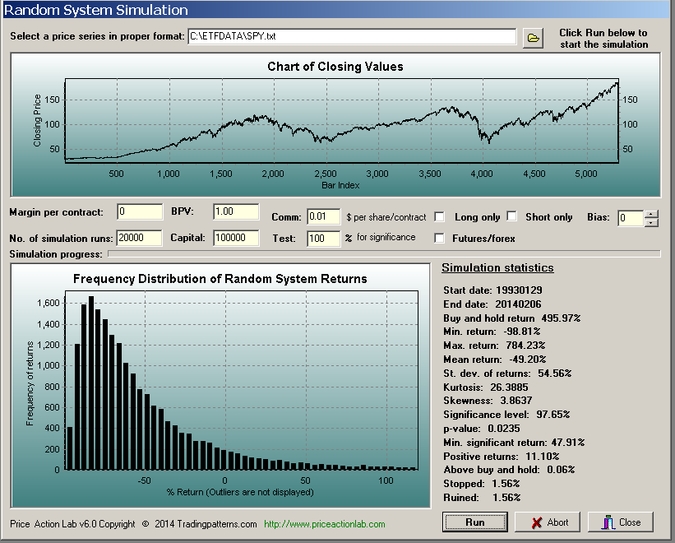 In the above simulation of 20,000 random systems on the same data, the coin is fair and both long and short positions are taken and are fully invested . The average trade duration is about 2 days. In this case only 11.10% of the systems had a positive return and 1.56% of the system are ruined. Note that the maximum return is 704.23%, about the same as in the previous case but the minimum is a negative -98.01%. The minimum return for significance performance is 47.91% and a test return of 100% is significant at the 97.85% level. Only 0.06%, a number indistinguishable from 0, made more than the buy and hold.

The above results indicate that frequent trading in an upwardly biased market has the same potential for maximum profit as a long-only position trading but at a much higher risk. In effect, only very skilled traders with an edge should be involved in a game whose returns are described by a power law instead of a normal distribution.

What about if we restrict the short-term trading to long positions only? The results are shown below: 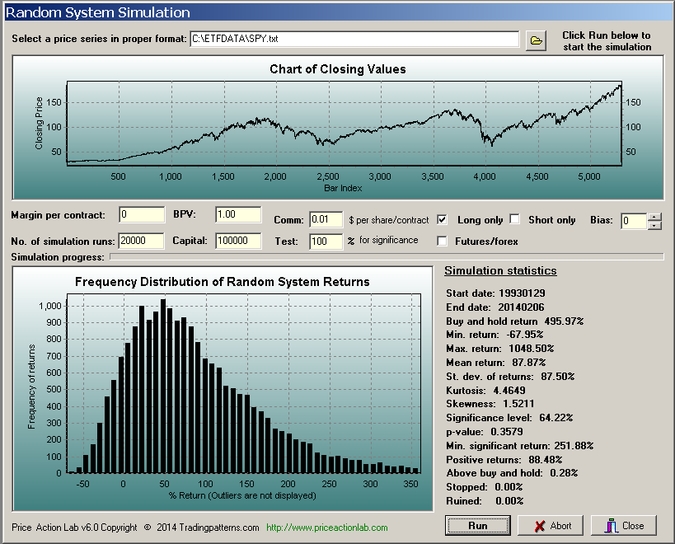 In this case 88.48% of the systems made money and the maximum return increased to 1,040.50%. The minimum significant return at the 95% level is now 251.88% and luck plays a much bigger role. But only 0.28% of the system made a return above buy and hold, a number indistinguishable from 0. Still, there is no advantage to trading long-only in the short-term as compared to long-only positions because the higher potential comes at a much higher risk. In the position case there are no losers but in the short-term case, the probability of losing is about 11.5%.

Impact of the 1990s uptrend

The 1990s uptrend had a positive impact on all technical methods for trading the market. Many technical analysis methods that worked well in the 1990s due to the presence of high serial correlation, meaning that they were irrelevant basically as there was no causation involved, have stopped working well in recent years because the serial correlations has been arbitraged out. If the same simulation is performed with data starting on 01/2000, the results for long-only position systems do not vary significantly in terms of the distribution of returns. As a matter of fact, more random system exceeded the buy and hold return due to the higher starting price of the series: 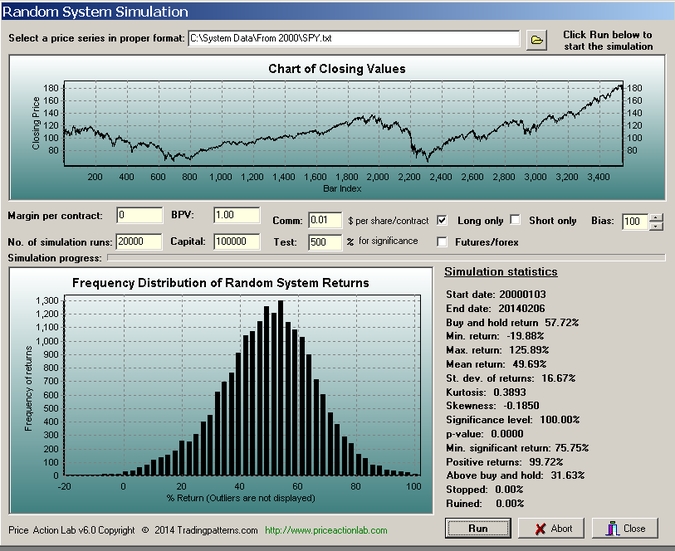 In this case there is a small percentage of systems with negative returns but it is indistinguishable from 0 as the winners amount to 99.72% of the total. The percentage of systems above buy and hold is 31.63% even if the price series starts with a downtrend. The minimum return for significance at the 95% level is 75.75%.

Technical traders, and specifically those involved in position trading, are often deceived to believe that their methods are profitable, especially those methods that involve momentum, breakouts and trend-following, when in fact they are irrelevant. More importantly, position trading along the direction of market bias even with random entries may be quite advantageous in some cases, as for example in the SPY case, and shorter-term trading may make no sense unless the edge is well-defined. In markets where there is no well-defined bias, like in some commodities and forex pairs and as was shown in the previous posts mentioned, the need of an edge is real for positive performance as these markets are inherently a negative-sum game.