Trading edges may appear, disappear forever or even suddenly reappear. It is not easy to determine when an edge has diminished permanently or it is in a dormant state. Statistical analysis with the returns of a successful fund and a comparison to top 20 CTA returns offers some insight

We consider the monthly returns of AlphaQuest Original Program (AQO) by Quest Partners LLC, founded by Nigol Koulajian. The main reason for this choice is the outstanding performance of this fund since inception and the different approach to markets. According to the founder (reference at the end of the article):

Where the typical quant manager looks for long-momentum trends with low volatility, we look for moves where the market is most likely to have an expansion in volatility and then benefit from that… Since tail-risk events that cause volatility to rise aren’t priced into assets by most managers, that’s our edge.

The approach is intriguing. Below is the performance of the fund: 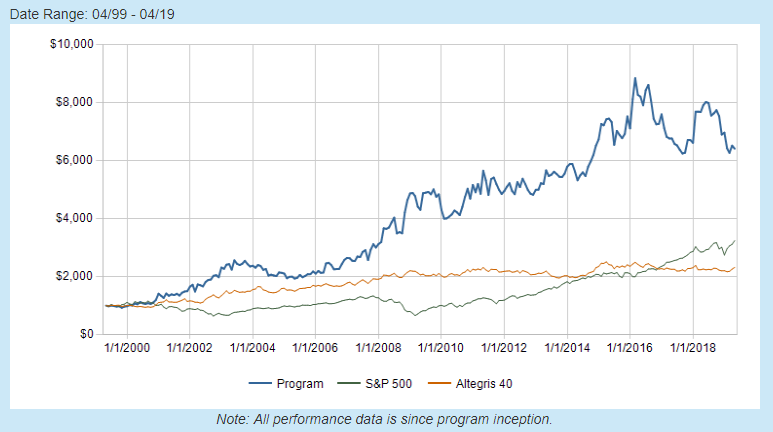 It may be seen from the above chart that from 1999 to 2010 equity rose by about 300% but since the rise is about 50%. The total return is 540% and annualized return is 9.73% and that outperforms the S&P 500 total return of 6.23% by a wide margin. Maximum drawdown is little high at -29.37% but this is justified for a strategy that capitalizes on short-term volatility expansion.

Next, we bootstrap (with replacement) the monthly returns of the fund 500K times and we obtain the distribution of resample means centered at 0. We then rank the mean monthly return of the fund, which is 0.9379%. 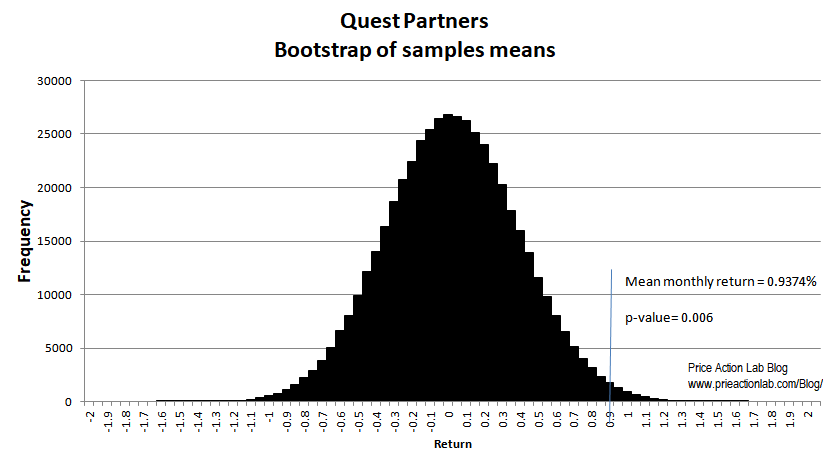 We conclude that for the period 2009-2019, we cannot reject the null hypothesis. This was also our suspicion since the performance of the fund since 2009 has degraded significantly. Does this mean that the edge has diminished or is it dormant and will reappear?

Before trying to answer this question let us look at top 20 CTA results with monthly data from 1987 (BarclayHedge) by repeating the bootstrap analysis.

Although since 1987 the performance of top 20 CTAs is significant with a p-value equal to 0.0000, after 2009 results appear random.  This has to do with changes in market dynamics due to several factors, including central bank intervention, falling bond yields, financialization of commodities, low volatility and a drastic decrease in the inflow of dumb money.

CTAs may have lost their absolute returns generation edge that was due to special market conditions in the past. I do not believe that Quest Partners has lost their edge since it relies on more fundamental market behavior that causes volatility expansion. As uncertainty returns to markets, funds that exploit tail risk will benefit. In fact, this may be one of few edges left to generate alpha. The rest, i.e., those that have no significant edge (factor investing) will have to settle with risk-adjusted returns at much lower absolute performance.