Shorting the Stock Market is a Losing Proposition

Shorting the stock market has been a losing proposition especially in the daily timeframe. The proof lies in market statistics and the effect is demonstrated with simulations and backtests.

I clarify from start that this article is not about shorting individual stocks but stock market indexes. Every day in social media there are many posts of short-term but also longer-term traders who are trying to short the market. Apparently, these traders have not done their homework but believe that since market corrections are usually quick and large in magnitude they will be able to take advantage of that and profit. But statistics say the opposite: shorting the market is losing proposition even if occasionally large returns are realized. The proof below involves market statistics, simulations and longer-term trend-following performance for long and short trades using SPY ETF.

Statistics are against shorting

Below is a chart of SPY ETF daily simple returns from inception to 09/19/2019. The chart also includes the cumulative win rate (number of positive returns/number of returns and the payoff ratio (average daily win/average daily loss) as a function of time in the daily timeframe. 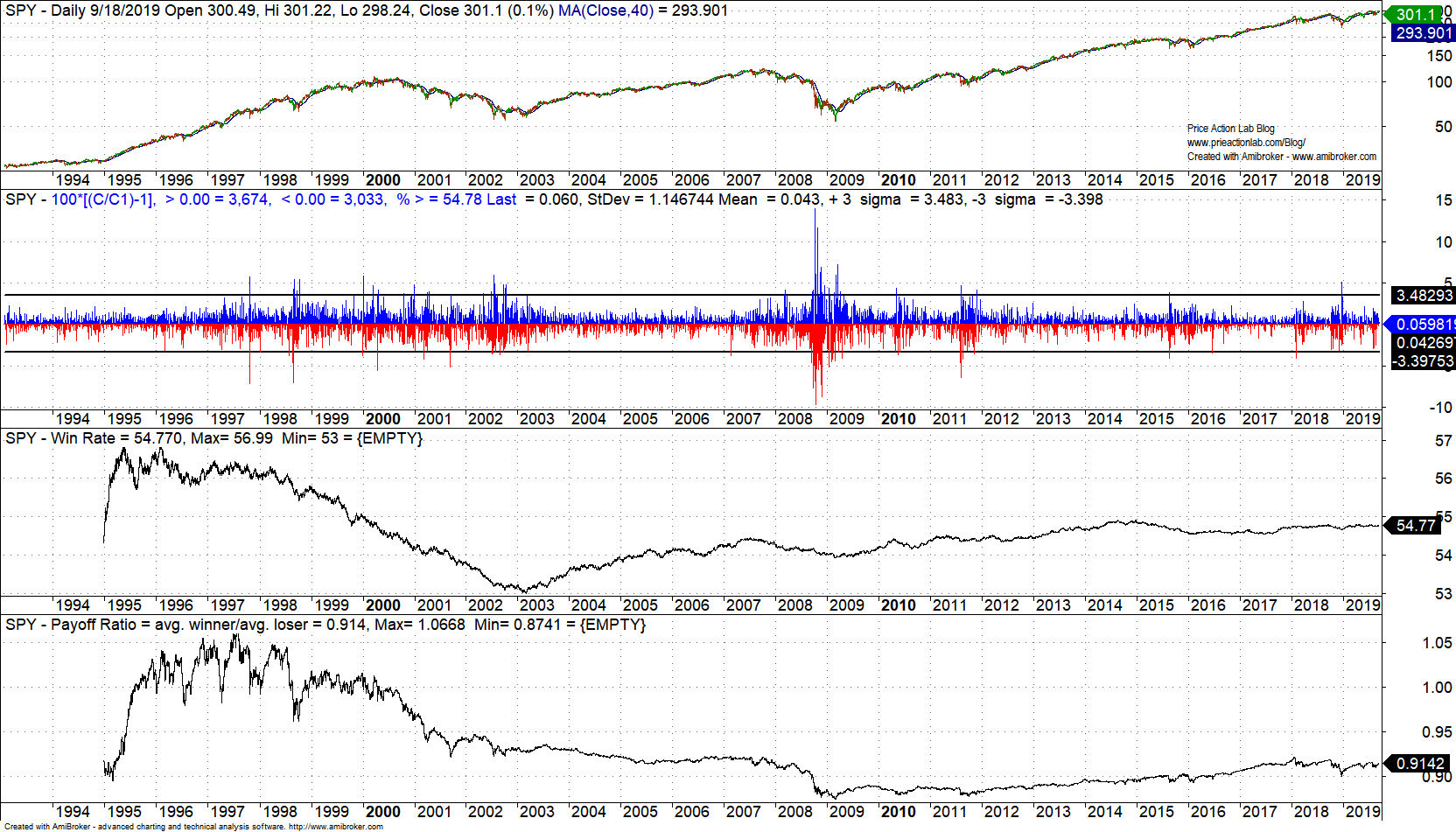 Since inception, the win rate is 54.77% and has varied between 57% and 53%. This means that the winning bias has been substantial. However, winning bias is not enough to guarantee profitability, which also depends on payoff ratio. This ratio is at 0.9142 and has varied between 1.0668 and 0.8741. Win rate and payoff ratio combined have given rise to the uptrend seen on the chart with 9.51% annualized return (CAR) in the period considered.

Therefore, only from the above statistics we should be able to deduce that shorting the market on a daily timeframe would require a significant edge to overcome the strong upward bias. Obviously, many traders think they have that edge but in reality they are noise traders. In addition, a large number of traders are worse than random because among other things they overtrade with insufficient capital.

Maybe statistics are not enough to convince aspiring short traders that they are dealing with a losing proposition, especially when they believe they have a winning strategy.  We thus move to the next step, the simulations.

Below are the results of the simulation for long-only traders. 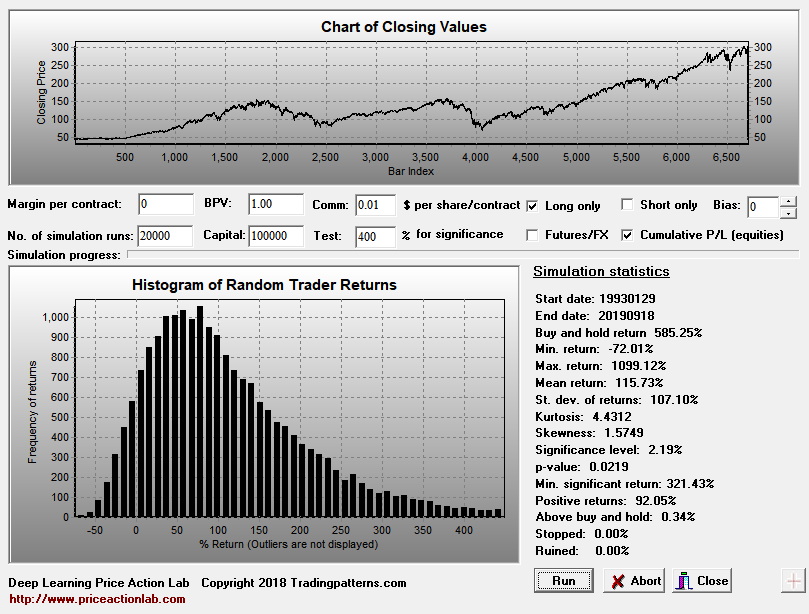 About 92% of the random long-only traders generated a profit in the period considered but only 0.34% of them managed to make more than the buy and hold return. The average return of all random traders was 115.73% but some managed to make nearly twice the buy and hold and the distribution shows a high kurtosis. The lowest negative return of the 8% of random traders that lost was about 72%.

However, the picture for short-only is ugly, as it may be seen next.

We repeat the simulation below for short-only random traders. 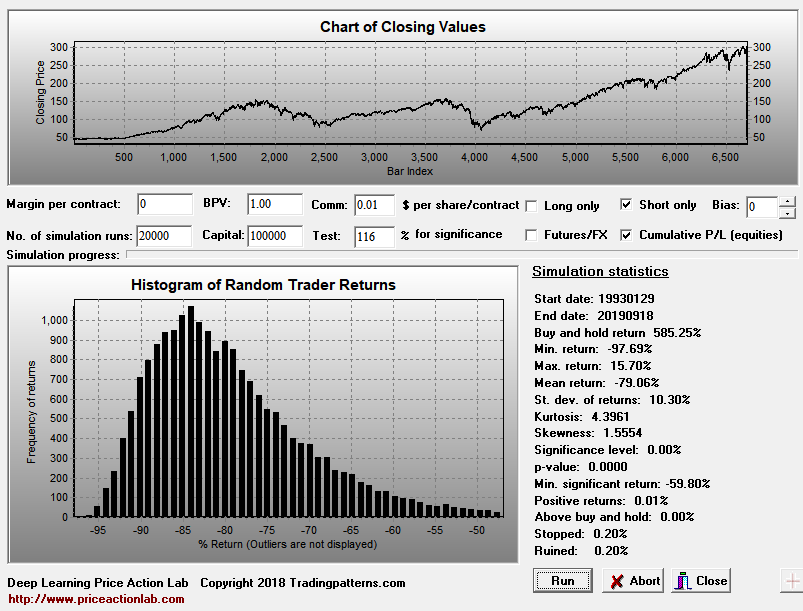 Positive returns are only 0.01%, or roughly just two traders out of the 20000!  There are also some ruined or stopped traders because the equity falls below the price of one share.  The mean return is about 79%. This is a losing proposition.

Why looking at random traders? Is this a realistic way of looking at the markets?

Most traders think they are not random but have some edge. In reality most traders do not have an edge and only believe they do. They are therefore random traders. Regardless, the simulation provides some insight into what may be possible: If the overwhelming majority of long-only traders profits, then these traders have chances especially if they can get a better bias through a strategy. But if almost all short-only traders lose, then the bias needed, or edge, to overcome that friction will be substantial. What is easier then to come up with: a long or a short edge?

Maybe short-only traders can make profit in the longer-term. Let us consider the golden cross strategy (50/200 moving average cross.) We consider the same time period in SPY ETF daily data but adjusted this time, $100K starting capital, fully invested equity and $0.01/share commission. All trades are at the open of the following trading day after the signal occurs. 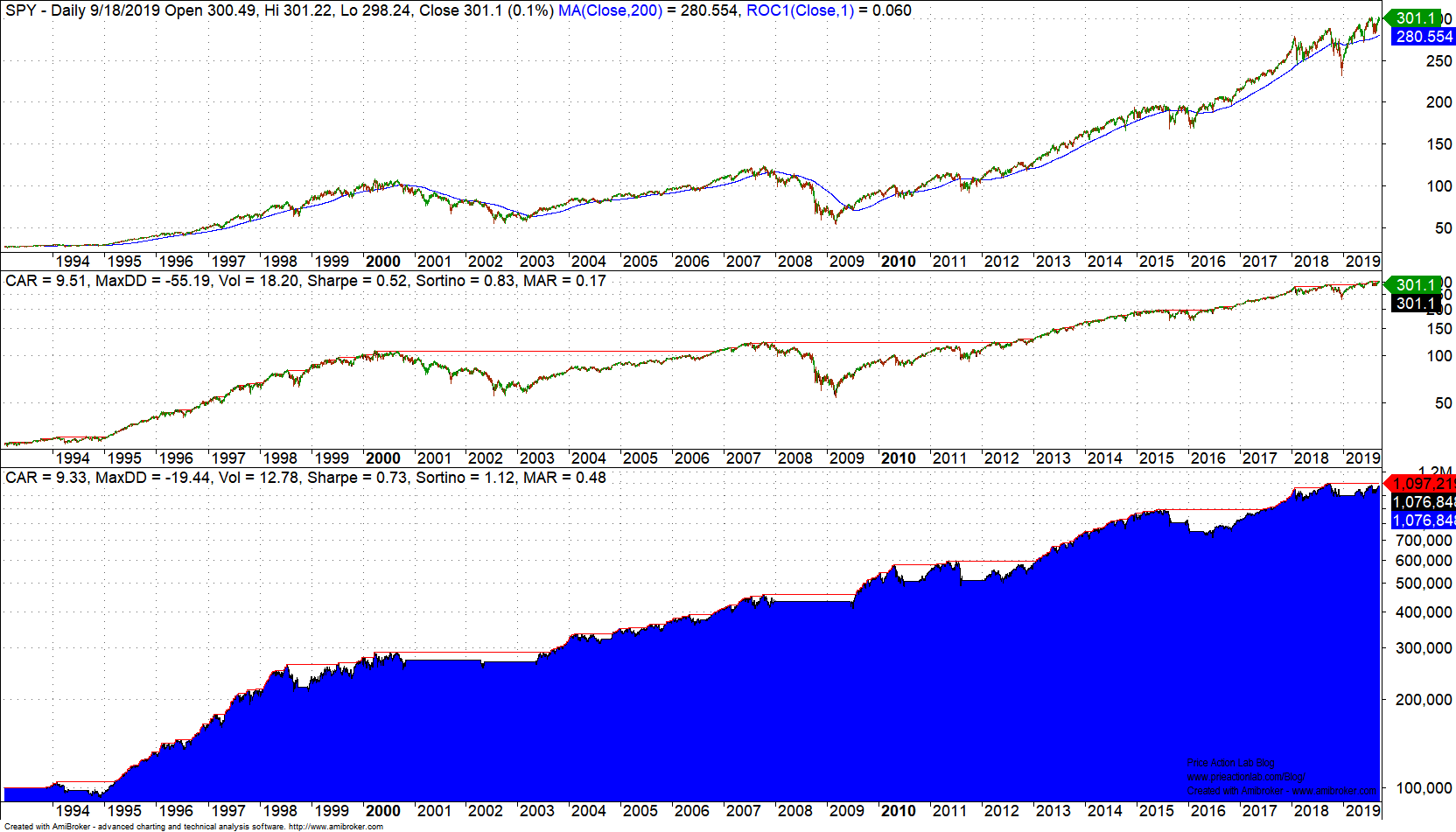 Long-only traders have realized nearly the buy and hold annualized return (9.33% versus 9.51%) but at much attractive risk adjusted returns with 0.73 Sharpe versus 0.52.) This strategy will continue working until a long sideways market occurs. 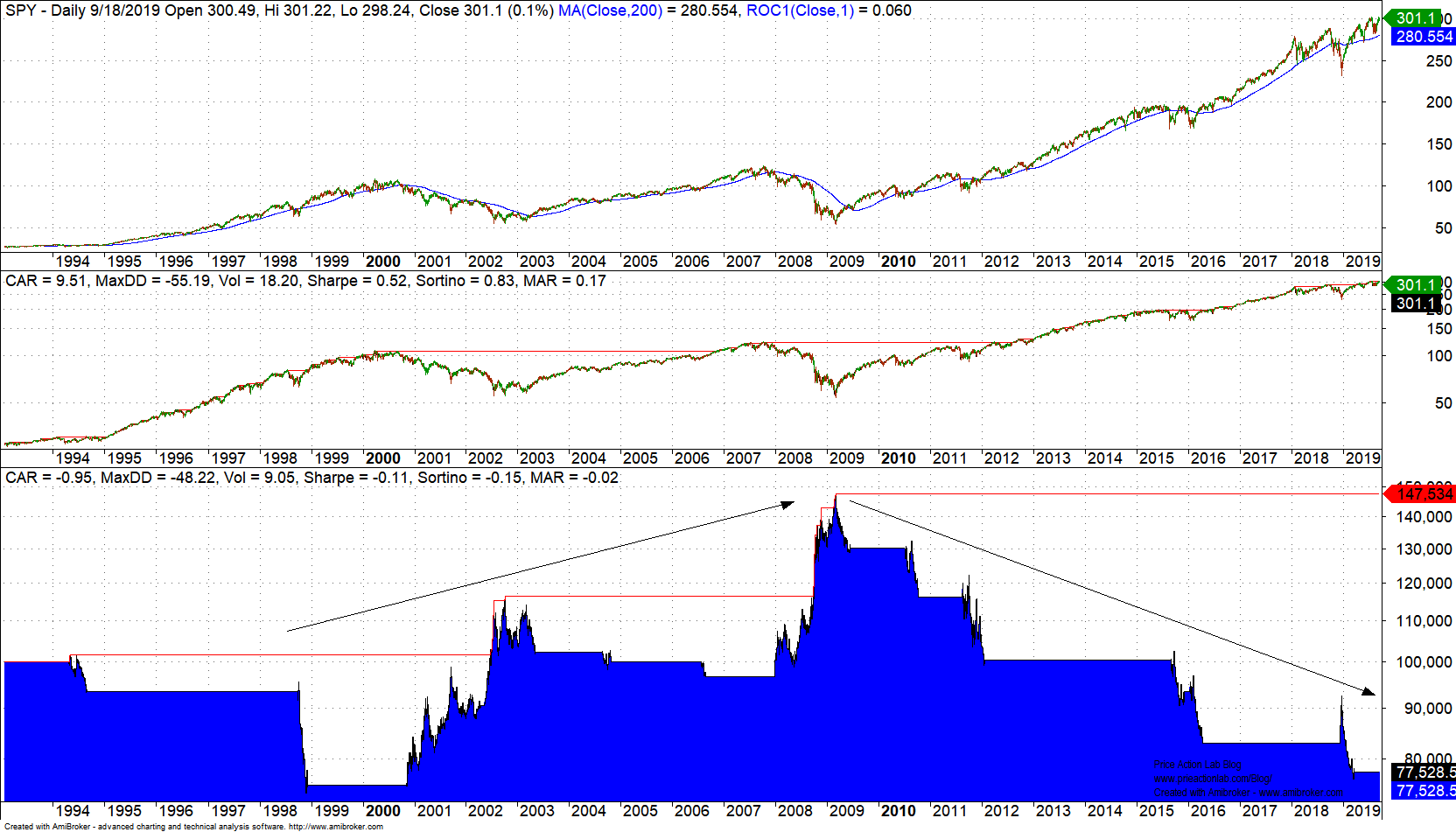 The chart above better illustrates why short-only traders are random traders: everything that was made in 2000 – 2003 and 2008 bear markets was subsequently given back to the market (to long-only traders essentially) after 2009. I hope the idea is clearer now.

Short positions require a substantial edge to be profitable on the average. Since the stock market has already a natural positive edge, a trader must first overcome that and then add to it a short edge. This probably translates to a requirement for a 7% to 10% edge to overcome friction and accumulate profit in longer-term for the short-only trader. In general, this magnitude of an edge is very hard to realize in the stock market and this is why shorting it is a losing proposition.

Technical and quantitative analysis of major stock indexes and 34 popular ETFs are included in our Weekly Premium Report. Market signals for position traders are offered by our premium Market Signals service