Being Humble is a Virtue

Financial blogosphere and media are crowded with people who have not traded through a major bear market but still think they know everything about the markets. Being humble is a virtue.

Financial blogosphere and media are crowded with neophytes that started their career in the markets after the last bear market and the beginning of a long uptrend in equity prices.

Below is a non-exhaustive list of things neophyte traders, fund managers and economists get wrong about the current environment.

The next bear market will probably wipe out 50% or more of the financial industry because a large part of it lacks the skin-in-the-game to deal with it.

Most of the neophytes, although they may be smart and highly educated, have no idea what it is like to trade through a bear market. 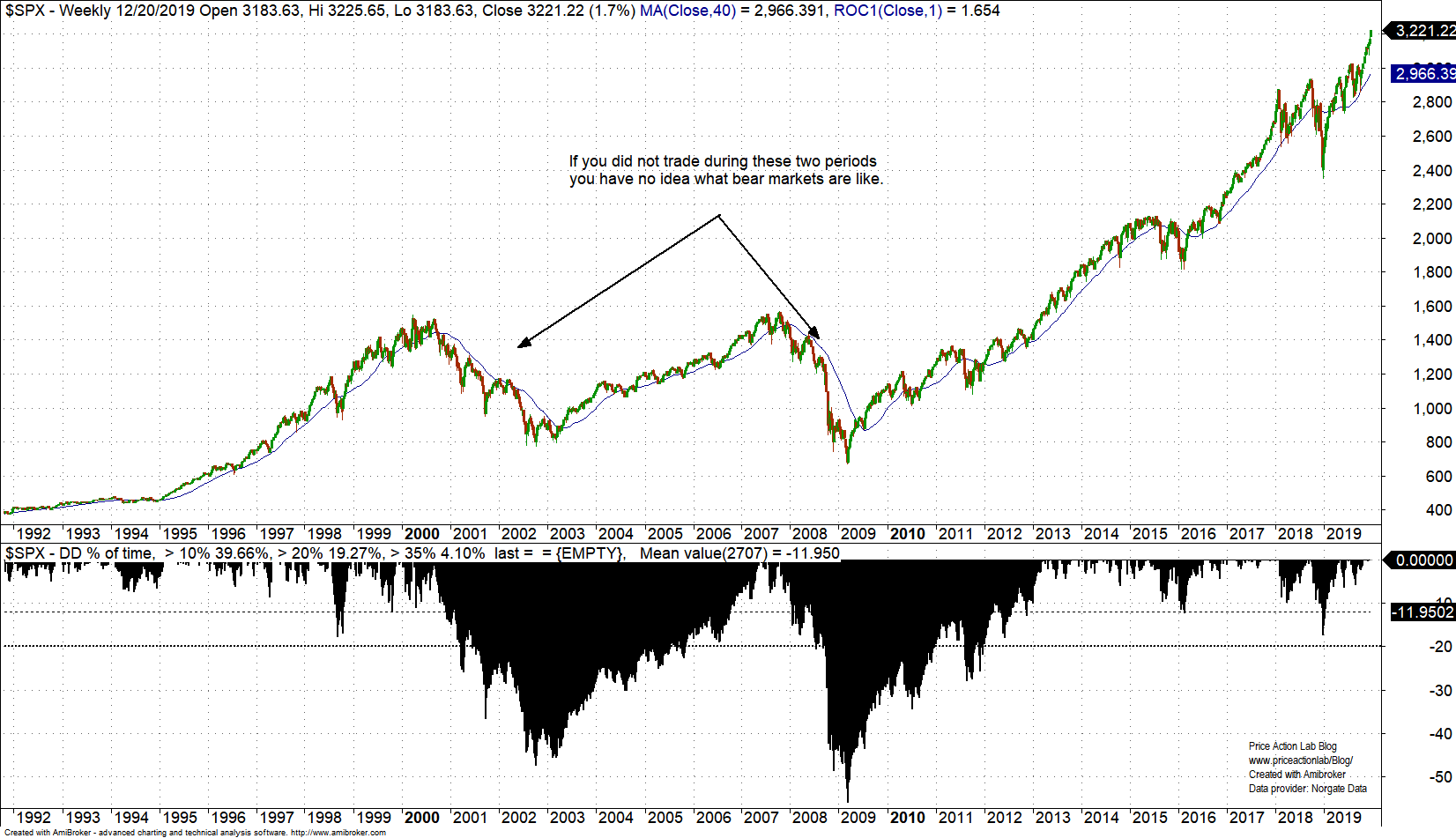 If you have not traded during the dot com and financial crisis bear markets shown in the chart above, you have no idea what it is like.

In hindsight, these rough periods for the market can be identified on the chart but at the time they occurred, no one knew what it was going to happen next but only late in the game, i.e., whether there was a bear market or there would be a rebound at some point and prices would recover.

Traders who were not active during those periods have no idea of the stress and potential losses. Risk management is the key to stay in the game during bear markets. Sudden rebounds make it hard to trade the short side coupled with limited availability of securities to short. No one knows if a rebound is the last or prices will reverse and the plunge will continue.

I have traded during both bear markets but in the dot com I was mostly trading futures and currencies and I did not feel much of the heat equity traders felt. However, I had a passive investment portfolio that incurred losses and that was a lesson of the potential risks involved in stock investing without proper risk management and diversification.

During the financial crisis I was trading equities and ETFs for a hedge fund. Stress level was too high. But my understanding of risk management had matured by then and I was only risking about 0.1% to 0.2% per position and no more than 2% on portfolio (total “heat”) at any given time. I remember during summer 2008 I was on vacation with friends for a few days but I would stay all day in hotel room trading and calculating my risk while watching everyone else swimming from the window. This is skin-in-the-game that no book or guru can teach you. I finished the year near breakeven and I could have even made money in 2008 if I had perfected my mean-reversion models by then, something that I have now.

Funds managers that started their career after the 2009 bottom have no idea what it is like to manage OPM during a bear market. I was only a trader for a fund but I was told of the calls the managers were getting in the middle of the night from investors who have watched the late “markets in turmoil” show. Only those with skin-in-the-game can survive under such conditions.