Investing In the Stock Market Based on Golden Cross Signals

Does it make sense to invest in the stock market using a long-only golden cross strategy? In this brief article we include some statistics and consider what could go wrong with this strategy.

Someone claimed in a tweet a few days ago that using a long-only golden cross strategy would have generated twice the Sharpe of buy and hold. Since a strategy that doubles buy and hold Sharpe sounds interesting I tried to verify this claim but I could not do that without cherry picking the starting date of the backtest.

Specifically, since 01/1941, Sharpe for buy and hold is 0.48 while the long-only golden cross strategy detailed in the chart below yields 0.59 for the ratio. That is an increase of only 23% In Sharpe and far from the 100% claimed in Twitter. 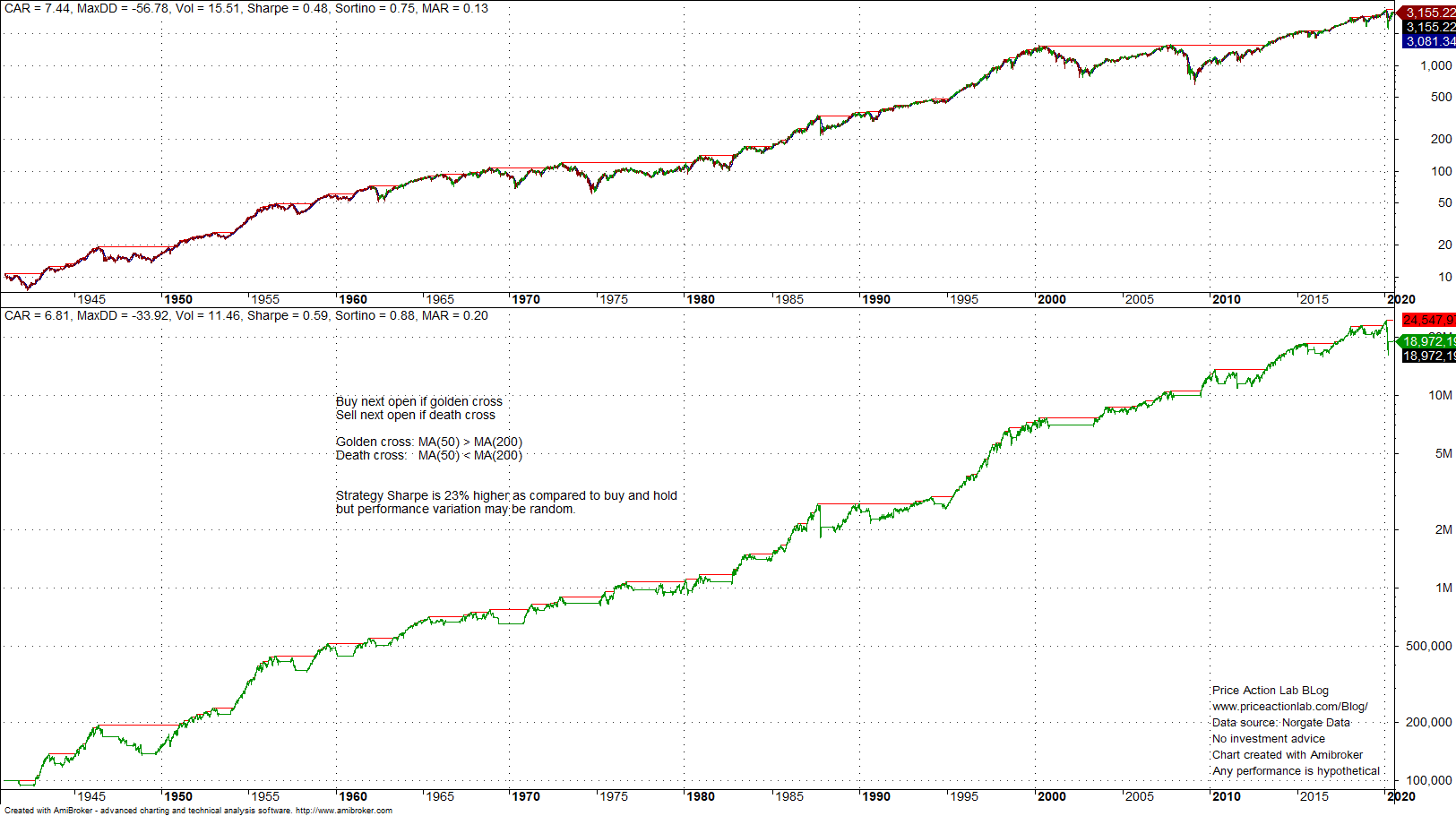 The small increase in Sharpe for the above backtest period does not justify the transition from strategic to tactical investing. See this article for more details.

After backtesting the strategy for various starting dates, I realized that if the starting date is 01/2000, then the Sharpe is about 85% higher. This is shown in the table below:

But why would anyone have chosen to employ a golden cross strategy in 2000 in the first place?  Table 2 below shows performance results from 1941 to end of 1999.

The difference between strategy and buy and hold Sharpe is only a few basis points (9.2%). This means that at the end of 1999 the performance of buy and hold and golden cross were statistically indistinguishable. The claim the golden cross strategy is better is made now with the benefit of hindsight.

In other words, an observer in 12/31/1999 would see higher CAGR and a little higher maximum drawdown for buying and holding. There was no benefit in abandoning the latter in favor of the former. An observer in July 2020 cannot affect decisions of observers in 1999.

Is the golden cross an “intelligent” strategy? If we bootstrap the trade returns since 1941 (there are 42 trades for the long-only version with 15.89% mean return), we get the following distribution shifted to a mean of zero. 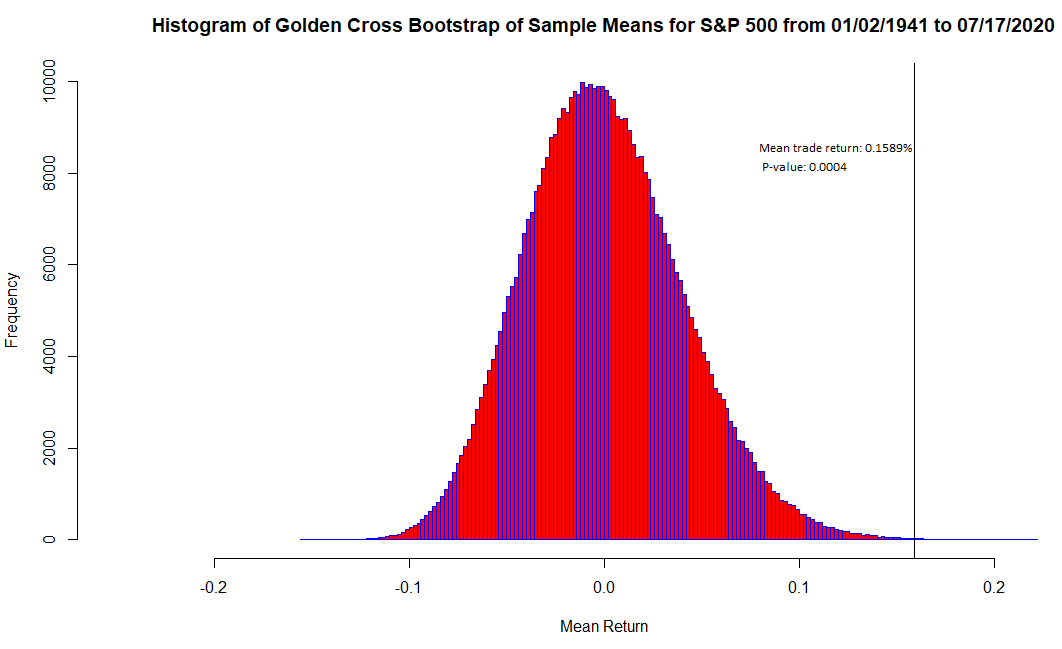 Ranking the mean return of 0.1587 yields a p-value of about 0.0004. But what is the null hypothesis? There are alternatives to consider:

In our opinion, the proper null hypothesis is #2 and it is rejected, so the strategy has been intelligent so far in matching its trade returns with market returns.

An example of a structural break is a multi-year sideways market as discussed in several articles in this blog, for example here. This has occurred in Emerging Markets from 2011 to 2016 and there is no reason it cannot happen in U.S. too. 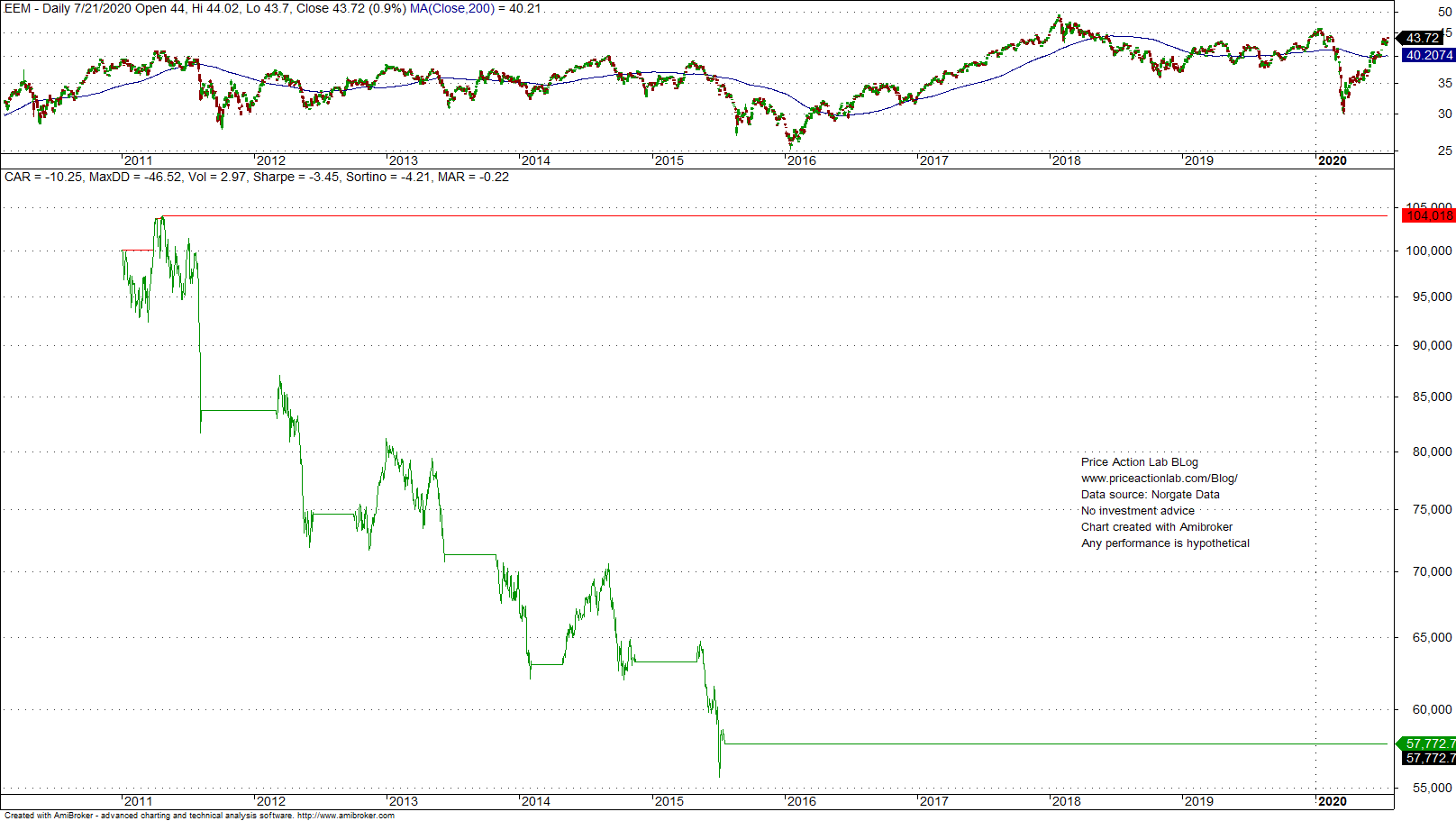 Buy and hold lost about 18% in the same period.

Therefore, it may be the case that the golden cross long-only strategy In S&P 500 has been lucky so far to not encounter adverse conditions that cause deterioration. This is null hypothesis #2 above that was rejected.