Trend-Following Vs. Quasi-Buy and Hold

When some people claim trend-following is dead, they do not mean there is lack of profitable strategies for trend-following but that the strategies that are used nowadays have no resemblance to those used in the past when this trading style was successful and are more or less quasi-buy and hold methods that pose high risks.

It is not this author that claims trend-following is dead. In fact, it has been dead for a long time. The famous Jim Simons that operates one of the most successful funds of all time said during a TED interview (10:55 minutes from start) that trend-following ended in the 80s.

Among others, Neil Berger has also questioned the future of trend-following. Specifically, he said that this “pedestrian” type of strategy won’t survive.

In the past, I have written a few articles about the perils of trend-following that got some people upset because they missed the point completely. Actually there are two points:

You may see below how beautifully a long/short trend-following strategy has performed in S&P 500 index from 01/1941 to 12/1979. The long signal is generated when price crosses above the 20-day moving average and the short when it crosses below the average. 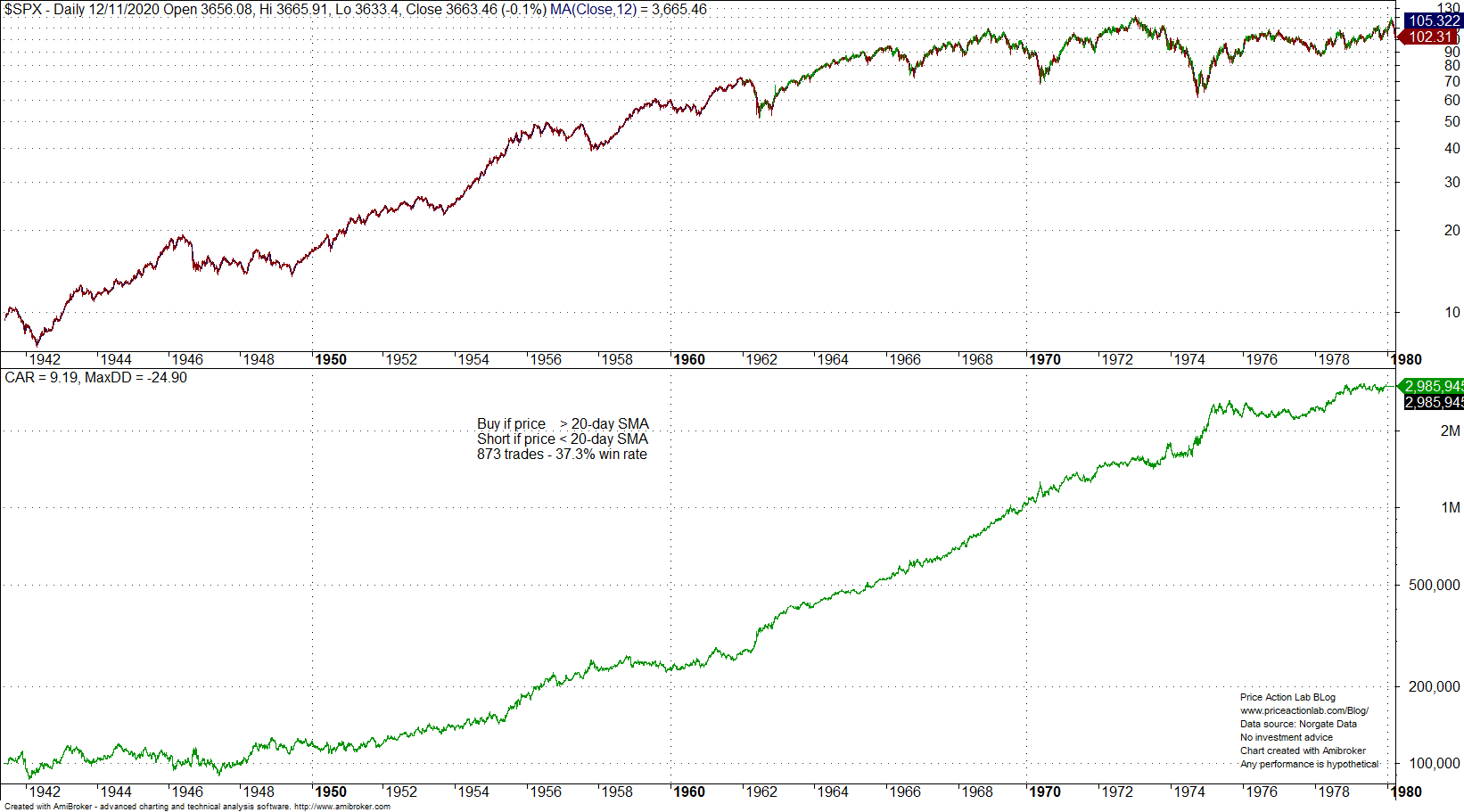 Now, this is what Jim Simons and the successful quants of the last century meant when they talked about trend-following; an effective way of following price in the short term and profiting from the market.

Everyone jumped on the bandwagon when they realized back in the 60s and 70s that market returns, and especially equity market returns, were serially correlated.  Naturally, an edge disappears at some point and the serial correlation was arbitraged out. This is how the typical short-term trend-following strategy above has performed since: a real disaster. 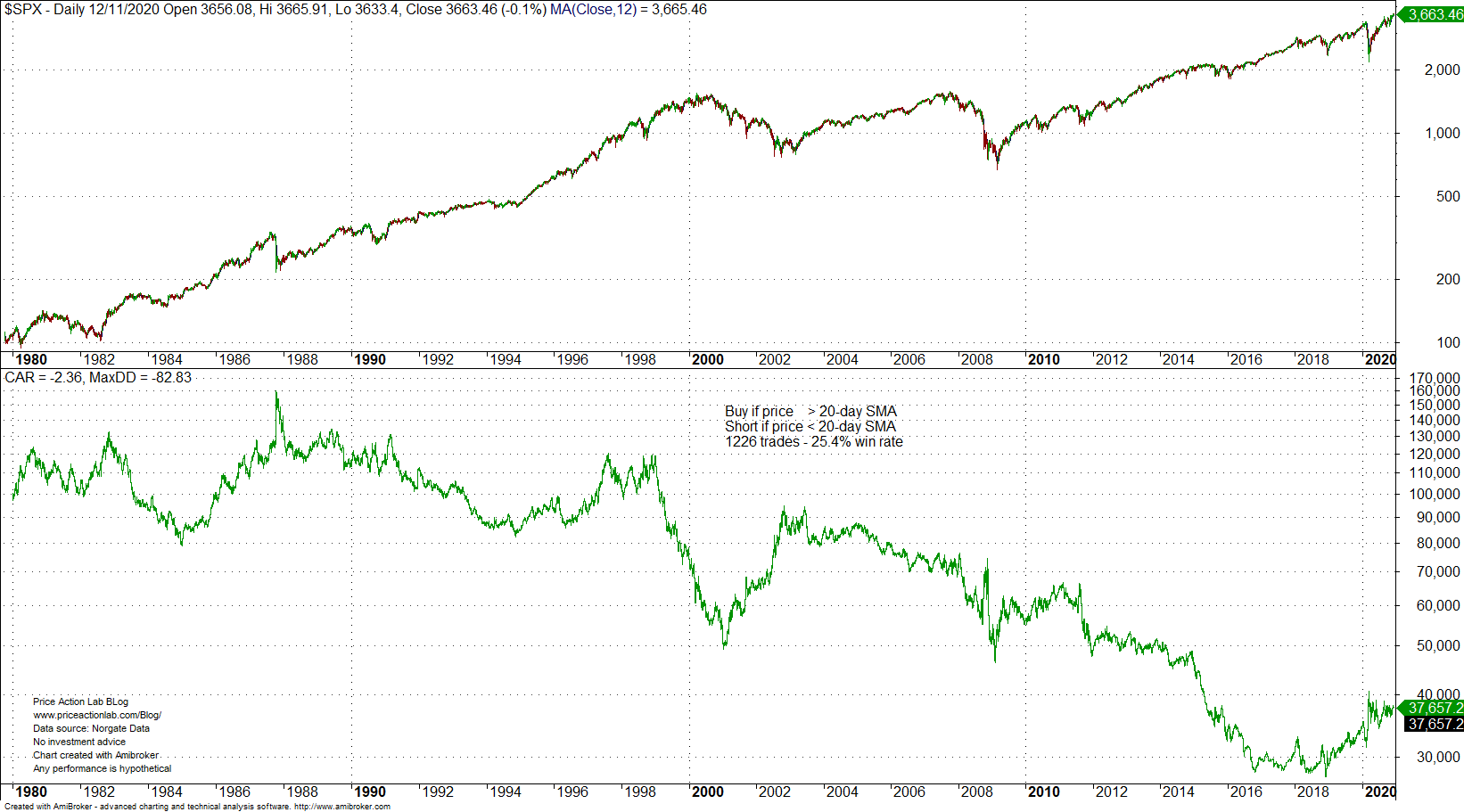 Analogous behavior and even worse in some cases was present in commodity markets but this is a brief article and the aim is to convey the general idea. After what the pioneers called “trend-following” had stopped working and turned into a wealth-transfer machine, some people with a backtesting program thought: “What about if I increase the moving average period, the timeframe, and even make this a long-only strategy?”

Sure, that will work but it is no longer the type of trend-following that made some smart people very rich that were quick to realize it worked and used it in the 60s and 70s; it is rather a quasi-buy and hold strategy exposed to high risks due to lower samples and much larger drawdowns. An example is the famous 12-month moving average strategy that some call it “price series momentum” possibly in an effort to “put lipstick on a pig.” 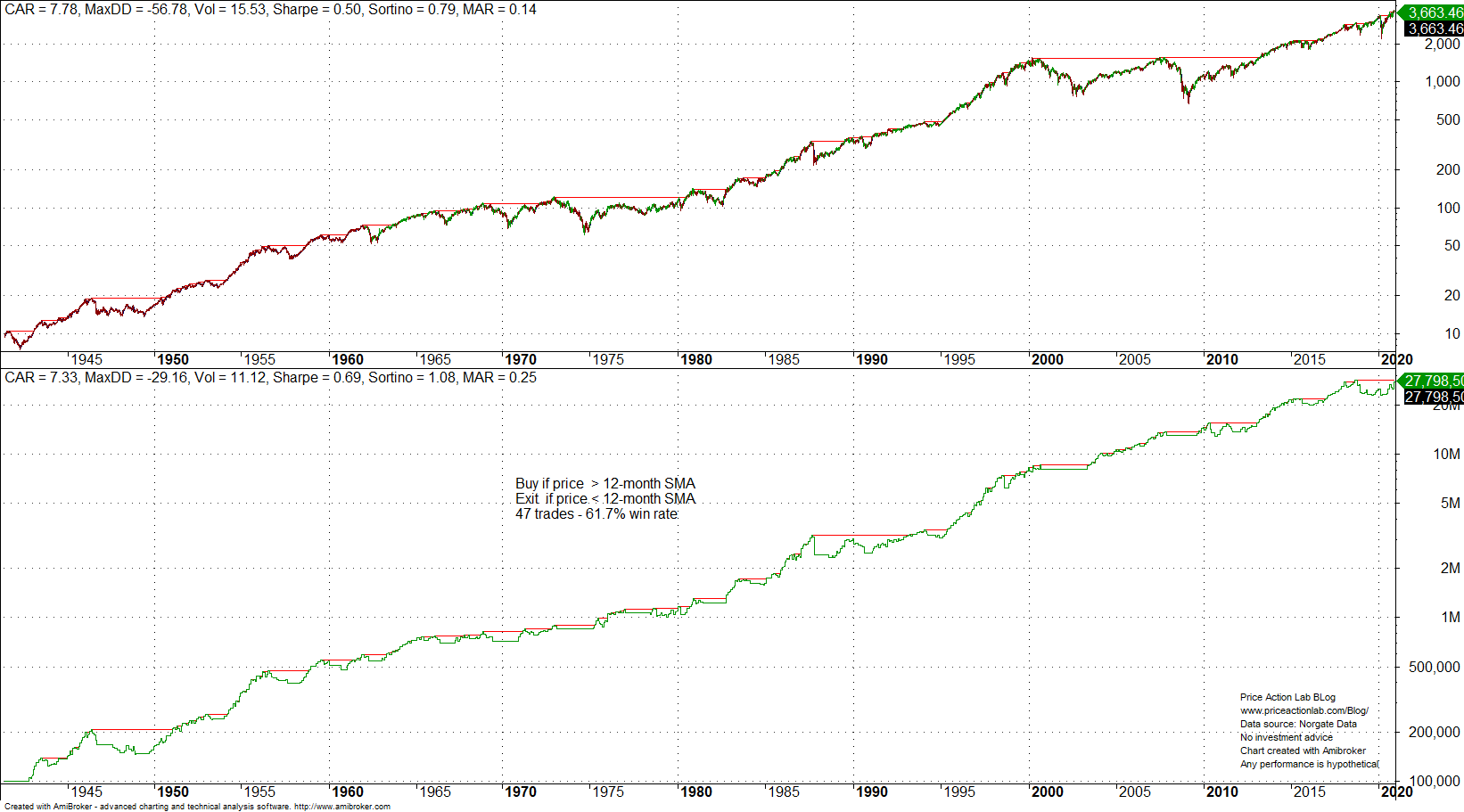 Although maximum drawdown is about 49% lower, there is no alpha. This quasi-trend-following strategy has only 47 trades as opposed to thousands of traditional trend-following. Due to this, there is an issue of statistical significance but also higher exposure to risks from sideways markets and fast crashes. Note that there has not been significant prolonged whipsaw in the US market and most recoveries were “V-shaped.” Extended whipsaw has potential of destroying the profitability of slow trend-following strategies while buy and hold may not suffer significant losses. In fact, I have argued that market timing based on pedestrian strategies such as price series momentum is indistinguishable from gambling.  I do not blame the academics here because they are often misunderstood by practitioners. Academics try to discover and understand models of price generation. That does not mean these models are suitable for profit generation but apparently some have equated the two. Trading strategies are more than models. The academic does not care about drawdown but the practitioner could be driven out of business by a large one.

The conclusion is that as markets were changing, so was the definition of trend-following and it got to a point that it is hard to differentiate between it and long-term buy and hold. But the impact on CTAs for example has been significant. “Since 2004, CAGR for top 20 CTAs is about 1.8%.”

It is important to understand how trend-following has changed and consider the challenge to move forward to the next level of sophistication. Note that some trend-followers of the 80s are now into alternative data mining or high frequency trading.