There is no Evidence that Counter-Trend Trading is Viable

Posted by Michael Harris on November 7, 2012

Trend-following is a very popular trading method employed by funds, longer-term investors and even mechanical and discretionary traders. This method of trading is compatible with common sense and its success has been verified in practice by multi-year performance records showing exceptional results. Some have proposed counter-trend trading methods as viable alternatives or supplements to trend-following. In this post I analyze another flawed counter-trend strategy.

Recently, some talk has (re)emerged about counter-trend strategies and their potential benefits. However, in my opinion, the viability of the methods has not been demonstrated and their purported positive performance appears to be the result of curve-fitting and selection bias.

Positive performance in terms of a high CAR, a profit factor greater than 1, etc. is not enough to support the robustness of such strategies. One must investigate the possibility of curve-fitting and whether these strategies performed well in the past due to some period of exceptional good returns but underperform or even generate losses when the underline conditions change. The strategy analyzed here is a simple counter-trend trading system as follows:

Below are the results for SPY since inception to 12/31/2011.  This backtest is for a fully invested starting capital of $20,000 without commission or slippage: 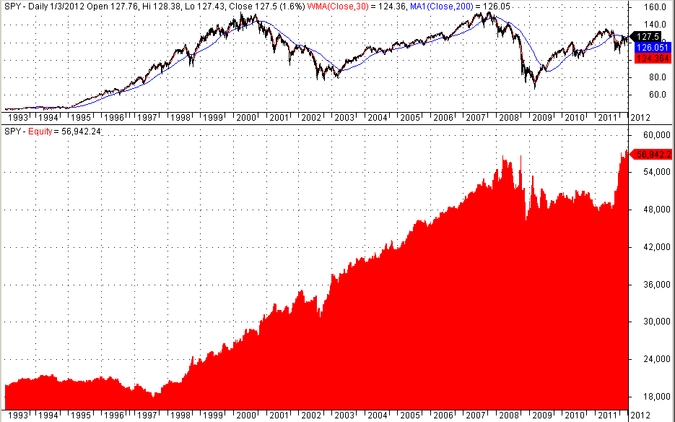 It may be seen that the performance stayed flat to negative during the first 5 years, from 01/1993 to 12/1997 but then there is a spectacular rise in equity that abruptly terminates in 2008. Then, the strategy struggles for three years and there is another jump in equity near the end of 2011.

First, I would like to point out that I am not going to make any hypotheses as to why the strategy behaved like that in this post. I do not even care. I only care about the fact that it is clear to me that this strategy requires some special conditions to perform well which may or may not be apparent or easily deduced from the above chart and they be endogenous or exogenous to the strategy. The fact that matters to me is that this is an unacceptable strategy and cannot be used to support the viability of counter-trend trading. As I said, I believe that counter-trend trading is not a viable method but if I see proof of a smooth and not curve-fitted system that performed well under all market conditions in counter-trend mode then I may change my mind in the face of empirical proof.

Below is a chart of the disastrous performance of this strategy in QQQ, for the period 01/2008 to 12/2011. Obviously, something is wrong with this counter-trend strategy and I neither want to know what it is nor I am interested in fixing it: 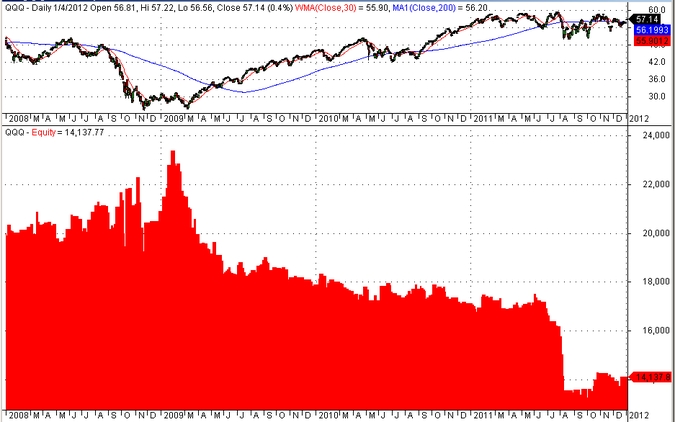 Lastly, the performance in IWM shows how one can get fooled by curve-fitting and selection bias: 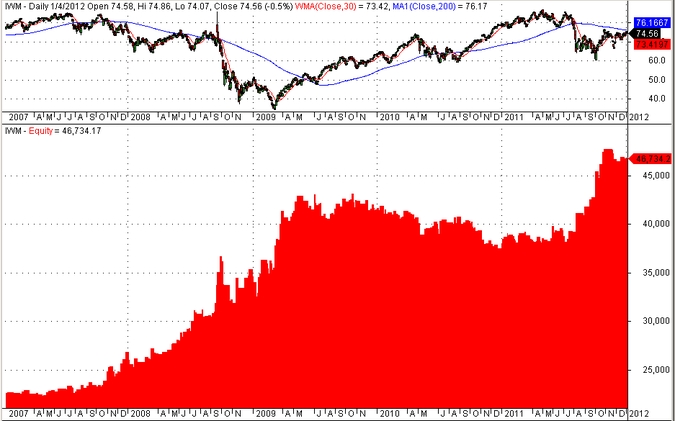 The strategy worked nicely until the middle of 2009 and then broke down, stayed in negative territory for two years and then generated a jump in equity after the middle of 2011. This is not something I would like to trade. The backtest report shows a CAR equal to 10.89% based on the backtesting period. However, CAR is the last parameter I look at when testing systems. I look first at the Sharpe ratio and the profit factor. A small profit factor, less than 1.50, indicates a high probability of a random result. Same for Sharpe ratio values below 1. In this case the profit factor is equal to 1.16 and the Sharpe ratio is equal to 0.69, i.e. very small numbers.

In another post yesterday I analysed the “Double 7s Startegy“, another counter-trend system, and showed that its past performance depended on a few periods of high equity growth but the strategy has deteriorated since it was published. In this post I demonstrate that the “Double 10s Strategy with 1-day Exit” is another failure when it is carefully scrutinized. As I have already said I believe that counter-trend trading is not viable but I will change my mind if presented with real evidence, not curve-fitted systems and averages of performance results that do not reveal the weaknesses of this type of trading.