Posted by Michael Harris on February 1, 2020

There is some consensus in financial social media that the Fed has caused inequality to rise and a market bubble. This consensus is probably driven by a bandwagon effect.

Many believe that the policies of the Fed and especially its quantitative easing have caused inequality to increase and a stock market bubble. Every day in social media there are hundreds of posts expressing these views. But are they right?

Let us consider inequality first; income distribution follows a power law since money was invented. Is inequality now worse or better than say 200 years ago?

Via the use of monetary policy and fiat money, the standard of living has increased significantly in the last two hundred years. At the same time, the number of millionaires and billionaires has also increased and this causes an illusion in the minds of many people that something is not right. In fact, this is what is right: the lower income levels can only be increased if inequality with the top 1% is increased. This is because of the distribution but I will not go into the mathematical details. What matters is whether employment and the median income rise: if higher inequality is required for improved employment and median income then that should be acceptable.

Even if the above arguments are questionable, and I am sure they are for some people, consider the following: the Fed cannot directly cause inequality to increase. They only execute monetary policy they think helps the economy. The following are the main inequality drivers:

Blaming the fed is the easy route. It is also done by a large number of finance professionals and traders who falsely believe that more money can be made when markets collapse and they would prefer bear markets. There are also those who would prefer Fed not to intervene because of political reasons regardless of orientation. However, simple analysis of historical price series shows that money is made in rising markets in multiples than what is made in falling markets.

There is inequality, no one can dispute this. There are very poor and very rich people and some extremely rich. The point made in this article is that the Fed is not causing the inequality; it is structural in every system that is based on free economy.

It is the job of the government to institute laws and regulations to minimize inequality as much as possible but without causing economic damage. If there is violent interference by government, then inequality may decrease but along with it the standard of living overall. It is a complex issue I would be foolish to even start discussing here. But the solution is not higher taxation of the rich as some believe.

Has the Fed cause a stock market bubble?

No, they have not. In fact, the Fed has actually constrained markets from rising faster.

I used data from Fed on repurchase (RP) and reverse repurchase agreements (RRP) since 2001 to produce two cumulative series, as shown below.

The series are only informative if one wants to gauge the overall activity over time. The red line level is significantly higher (long scale) than the blue and this means that in the period considered, the Fed was mostly draining liquidity from the system rather than injecting. This was done especially during 2008 when there is a jump in the red line, to keep interest rates from falling lower. Lately, the blue line (RR) is rising because the Fed is trying to prevent interest rates from rising and causing a recession. For this reason it is injecting liquidity in the system. Is that bad? What was all this hysteria about repos in social media? Do these people actually want rates to go higher and everyone having to pay more for mortgages, credit cards, business loans, etc? The argument against repos was that they fueled a bubble stock market. But there is no bubble. 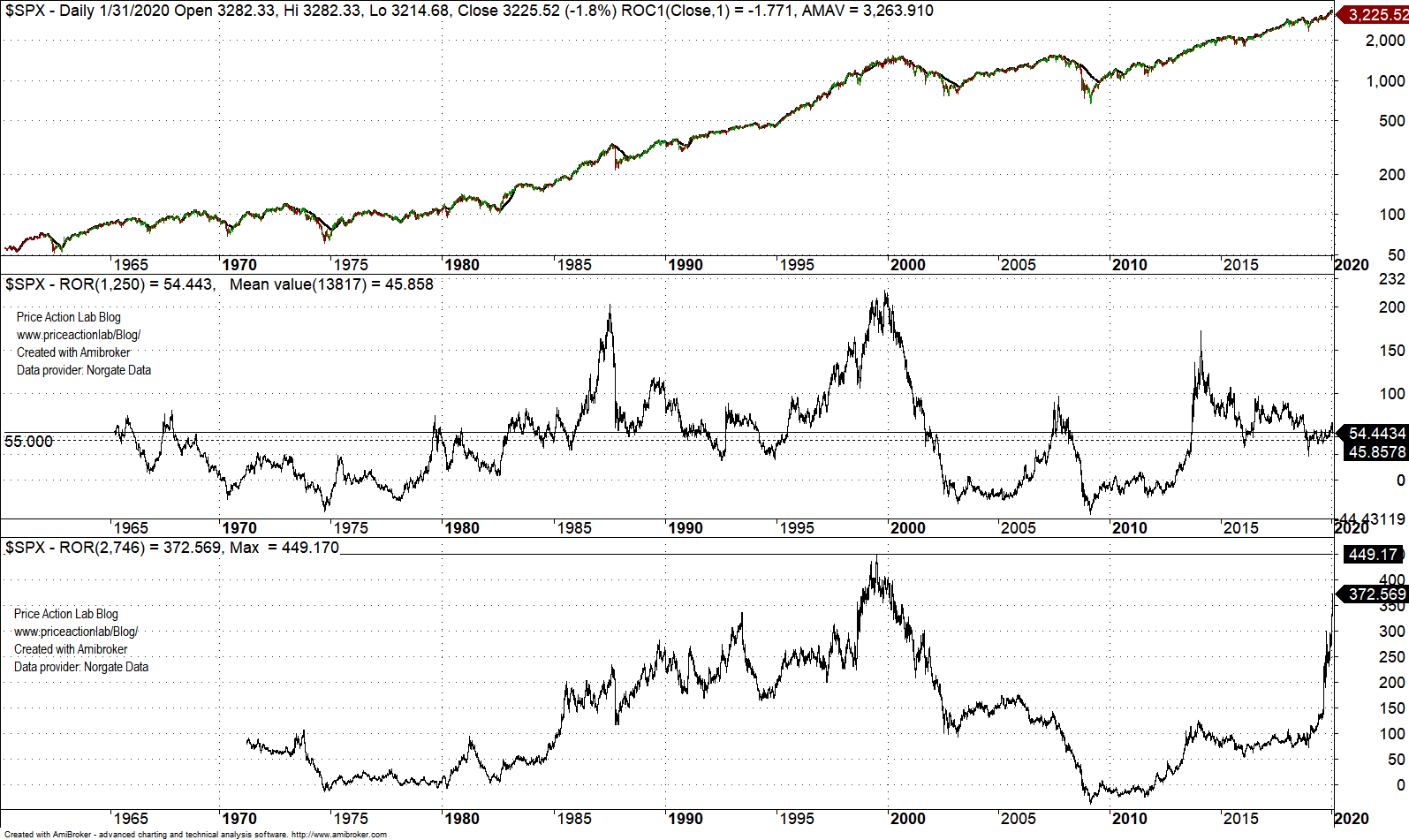 Therefore, despite the quantitative easing and recent repo activity, the market since the 2009 low has not matched performance in the 90s. There is no bubble.

As it turns out, Fed monetary policy has only supported a modest uptrend in stock market. Maybe that is the right approach but the system is too complex to decide whether that was the right policy

– Fed does not create inequality: government policies, businesses and people actions do.

– Fed has not created a market bubble. Market is not a bubble, at least yet.