Futures Are Not Equities And An Anecdote

A few financial blogs announced the largest daily percentage loss ever in coffee futures yesterday. That was a blunder because futures contracts are not equities.

Usually futures charts reflect continuous prices due to contract rollovers with historical prices adjusted to eliminate price jumps at rollover dates. There are a few different methods for adjusting prices to obtain a continuous series but the most popular is the Panama method. One drawback of this popular method is that it introduces a drift in the series that may increase with time. Usually the adjustment is made at the date of “volume switch” to the next contract and it involves matching the closing prices by adding or subtracting a constant from all historical prices.

In the case of coffee futures, the backward adjusted continuous prices using the Panama method are shown in the bottom chart below while the top chart shows just continuous contracts. 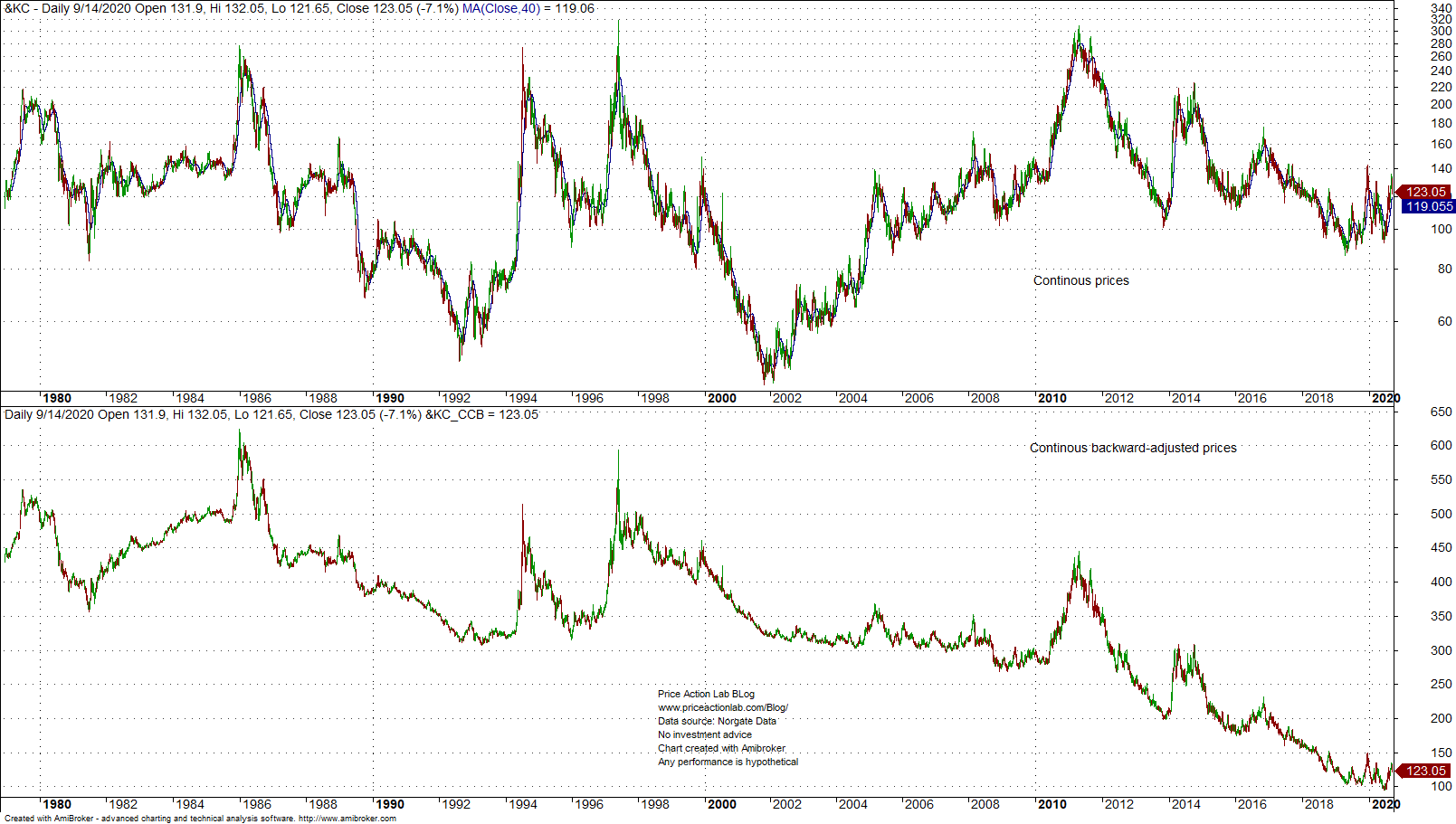 It may be seen that the Panama method has introduced a down drift after 1998 in the bottom chart that is not present in the top chart of continuous prices. This downward drift makes recent percent returns appear much pronounced but that is an artifact of the adjustment method.

If we look at daily returns and first differences, the blunder of those who declared that coffee yesterday fell the most ever becomes apparent. 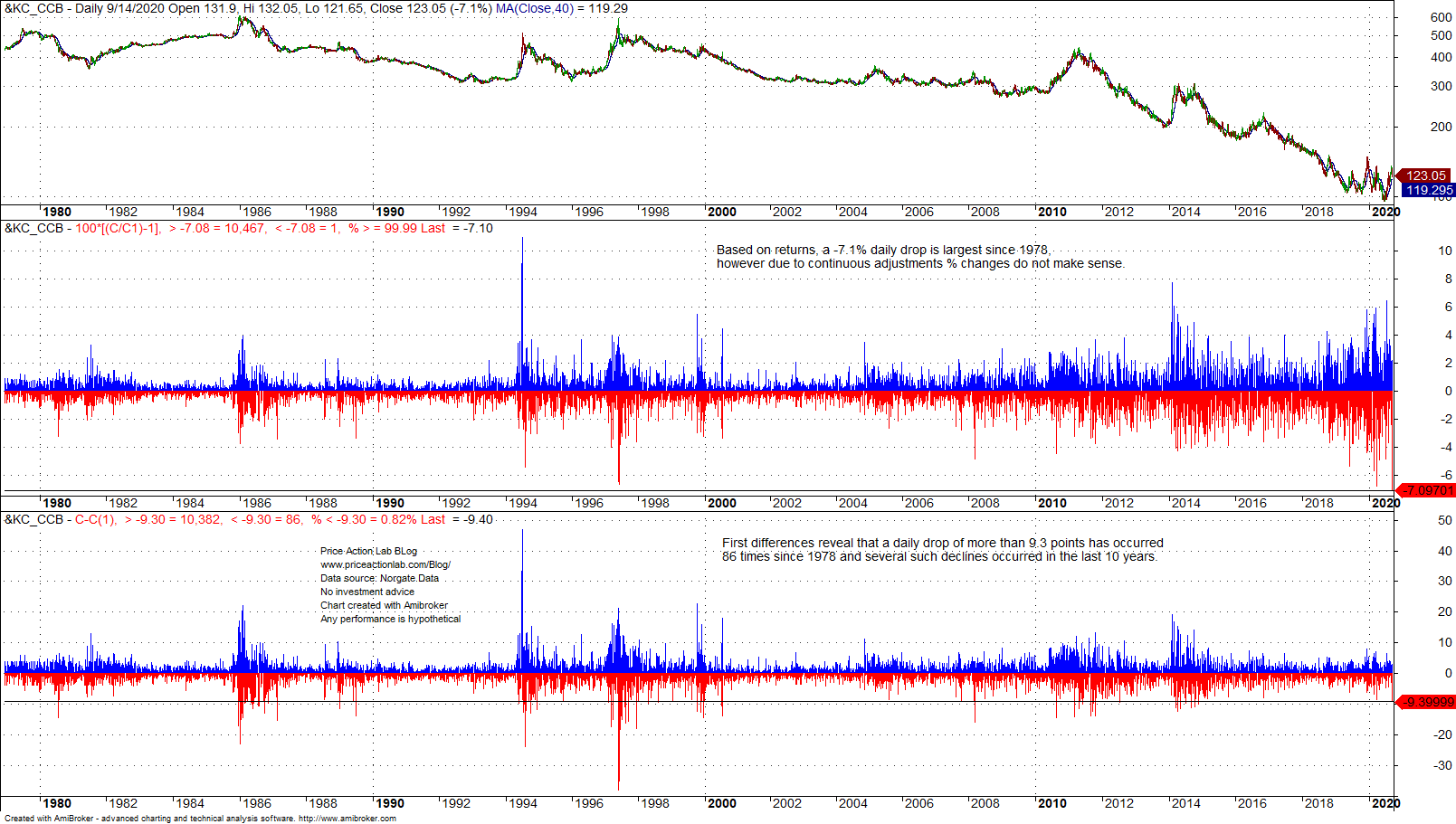 As it may be seen from the chart above, based on returns coffee fell the most since 1978 but this due the down drift imposed by adjustments.

If we look at first differences in the bottom chart, as this is more appropriate with futures, then there have been 86 occasions in the past that coffee fell more than it did yesterday.

In fact, with equities we look at returns because they stay invariant with respect to split and dividend adjustment while first differences make no sense. Therefore, in this sense equities and futures are diametrically opposed.

Also please note that many “analysts” in social media and financial blogosphere constantly treat equities, futures, bonds and forex as similar assets. For example, numerous times even known analysts after a rise in rates refer to “bond losses for investors” when in reality, if a bond is kept to maturity there are no losses but for equities there is no such thing as maturity or duration.

Another example is treating forex pairs as securities and ignoring the fact when the base currency rises (falls) the quoted currency falls (rises.)

Finally, an anecdote from my first days as a trading system developer. Back in the early 90s and fresh out of university, I was approached by someone with access to capital to develop a trading system for currency futures for 5% incentive fee on net profits. I developed one that made about 60% in the first year possibly due to luck. Then, they told me that since the system was performing well the capital was raised by a factor of about 10 but now my intensive fee had to be only 0.5% or about. I was upset and declined the offer. They had a replacement ready, some computer science person who would run the system.

After about a year I learnt that they had lost a lot of money. I backtested the system and actually it was supposed to be up a little after some swings. Then, I realized what happened: the computer science person knew nothing about futures, or about trading in general, and did not adjust prices at rollovers; that caused false signals and eventually a large loss. In fact, trying to save 4% of profits cost them about 20% or more of their capital. Then, as it is often the case, they abandoned trading and moved to real estate.