In a post yesterday in The Reformed Broker about the Barron’s cover story Josh Brown admits there are a few bubbles out there “in some areas of tech and in the IPO market.” In my humble opinion any argument that tries to deny the presence of a bubble based on P/E ratios, like the one in the Barron’s cover story, is a strawman. This is because a bubble market is only one of several conditions that can lead to a significant correction.

The bubble strawman is set around current value of P/E ratio. Most investors know that P/E ratios have no predictive capacity, especially those of high cap indices, like the S&P 500. More importantly, the S&P 500 index P/E ratio is now seriously skewed because of its high values after the 2008 market collapse, shown in the graph below: 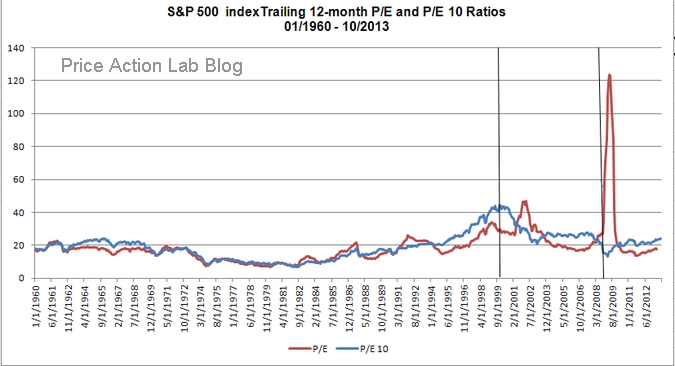 The graph shows the trailing 12-month P/E ratio of S&P 500 index (red line) and the P/E 10 ratio (blue line), which was developed by Yale professor Robert Shiller and calculated by dividing price by a 10-year average of inflation-adjusted earnings. After the financial crisis the P/E ratio jumped to 123.7, something that illustrates how this indicator lags price.  This fact is also evident after the 2000 bubble market (first vertical line on the chart) and the subsequent peak in P/E whereas the P/E 10 ratio peaked at at the top of the market. Thus, the P/E ratio is a lagging indicator of market tops. The P/E 10 is currently at 23.92 and above its mean of 19.53. The standard deviation is 7.83.

Also very important is the fact that investors do not care specifically about bubbles but whether markets have reached a top and are about to decline. Also, they care whether a bear market is coming due to financial conditions. A bubble is only one condition that can cause a market collapse.

Finally – and this is probably what makes the bubble argument unsound rather than just a strawman – tech bubbles can cause a broader market collapse due to a spillover effect. A simultaneous collapse of recent overpriced IPOs can create panic, margin calls and broad liquidation. There is definitively a bubble in some areas of tech, as Josh Brown notes, and I believe the dangers are real if the capitalization of this sector increases further.