Only Speculators Would Have Held Amazon Stock Since IPO

Posted by Michael Harris on September 7, 2016

There is noise on social media about a +45,000% return in Amazon stock since IPO. That number is an illusion. Only speculators would have held stock with the drawdown profile shown below. I suspect more investors lost money in this stock than made profits and most insiders have benefited from the bubble rise.

Below is the drawdown profile of buying and holding AMZN since IPO: 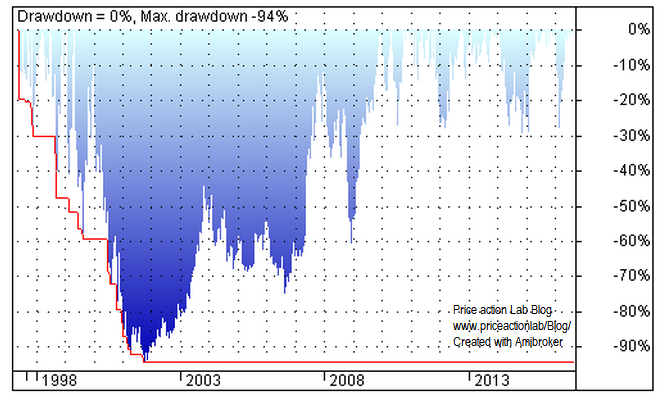 This is one of the worst drawdown profiles possible. Over 90% drawdown in 2001 during the dot com bust followed by more than 70% in 2006, nearly 60% in 2008, and then multiple instances of nearly -30% drawdown levels, the last one occurred in February of this year due to a fall from the top of December 2015.

The P/E of this stock is about 196. This is a bubble stock according to this measure. Based on historical behavior, another drawdown in the 30% to 60% level is possible.

Technical and quantitative analysis of Dow-30 stocks and popular ETFs is included in our Weekly Premium Report. Market signals for longer-term traders are offered by our premium Market Signals service.