Technical Analysis Has Contributed To A Massive Wealth Redistribution

The massive wealth redistribution that was caused by the use of technical analysis was from retail traders to market makers, started in the 1980s and lasted for about three decades.

The redistribution is still continuing but it is limited and it is from technical traders that are experiencing a backfire cognitive bias to algo traders that act as market makers.

Let us see how and why below.

Both of these represent attempts to use lossy compression to predict the market. Although some technical traders insist that there is no prediction involved when using technical analysis, obviously they do that because of an ignorance of a massive literature that refers to such techniques as prediction methods.

Compression with technical analysis basically maps a vector of historical prices to some representation of it for reducing prediction complexity, i.e., it is a lossy compression method because information is lost, as opposed to some more advanced but equal ineffective lossless methods where information is not lost (e.g. Lempel -Ziv).

But why this lossy compression method has failed and caused such a massive wealth-redistribution? 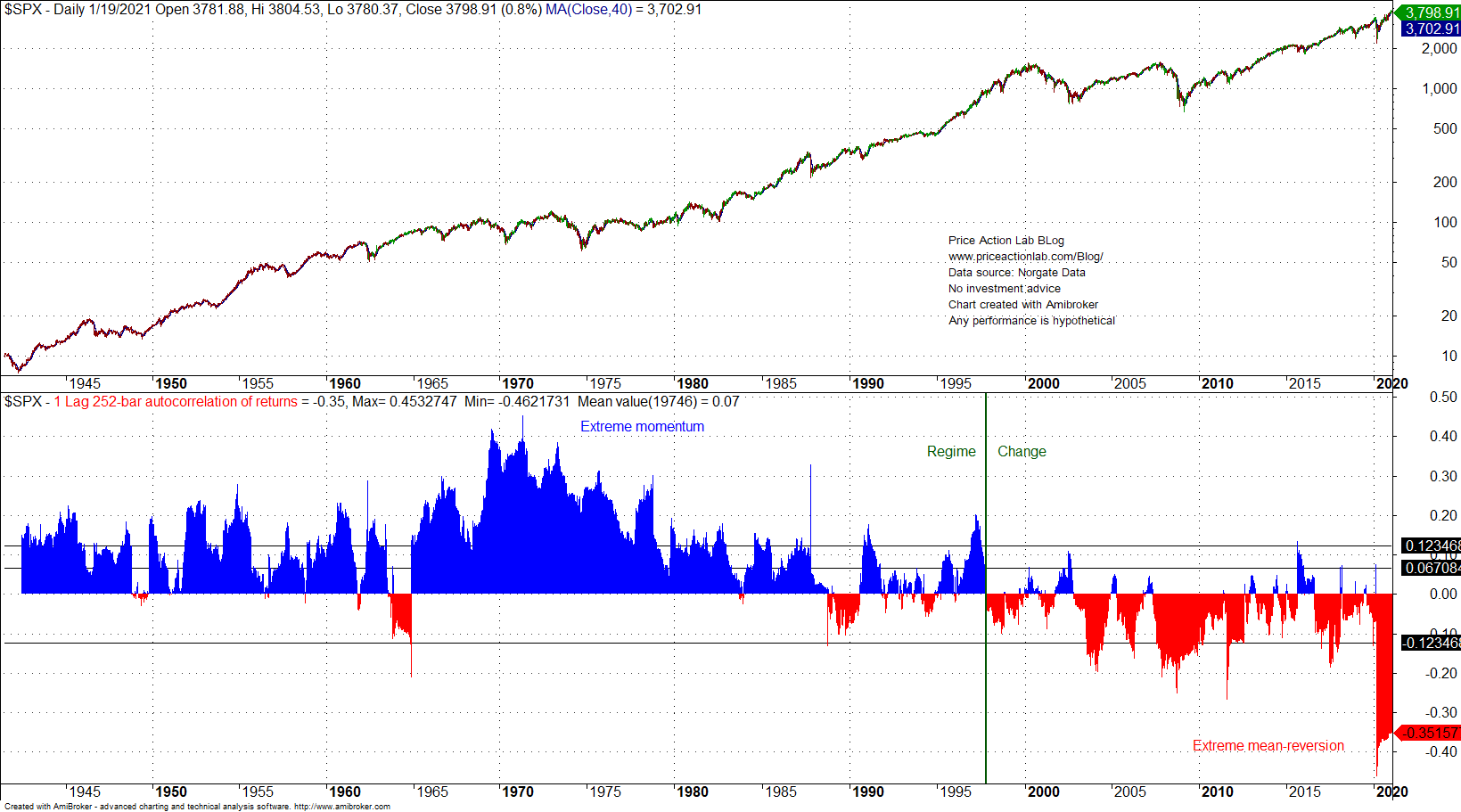 Technical analysis was developed during the 1960s and 1970s when personal computers were not even available. It was an attempt to identify an alphabet for compressing stock data and profiting from predictions. Note that most technical analysts still use books written during that period and their subsequent revisions.

However, also note that during the period of technical analysis development there was high 250-period autocorrelation of lag 1 in daily returns, as shown on the above chart that also shows bands for significance.

As I have discussed in another article, those who developed technical analysis were fooled by the high and significant autocorrelation and attributed predictive ability to random formations in stock data. Actually, in commodities and currencies, the autocorrelation was not as high or non-existent.

Technical analysis was a true gift to market makers because a large army of retail traders entered the market battleground armed with it, a truly useless tool. And most were ruined, day, swing and trend-followers alike.

As it may be seen from the above chart, after the dot com bubble peak in 2000, positive autocorrelation disappeared and markets became mean reverting. This affected technical analysis in the following ways:

Chart patterns: Confirmation of a chart pattern no longer implied continuation of price moves along the desired direction. Prices would revert and invalidate the pattern.

Indicators: Major signals, such as for example the death cross or forecasting with the use of moving averages, lost their predictive ability due to the negative autocorrelation. Technical traders were forced to increase the lag and the loss of information increased exposure to higher drawdown levels and risk of ruin.

At the same time that schools of technical analysis were awarding diplomas for excellence in recognizing chart patterns or using indicators, market makers were the beneficiaries of the largest wealth redistribution that has ever occurred with non violent means. The result was a drastic reduction in the population of retail traders.

There are still some technical analysts that insist that chart patterns and indicators work well and that they use them in ways that do not involve prediction. It is quite puzzling that they say this because the objective of compression, and especially of the lossy type, is exactly that: prediction.

The future of technical analysis

In recent years there was an effort to develop evidence-based technical analysis through the use of backtesting and statistics. This has caused another round of wealth-redistribution, but obviously of much smaller magnitude, since some paid too much attention to hype created by some authors. As I discuss in my new book, the problem with modern technical analysis is not in the correct application of statistical methods, as some naively believe. The problem is that backtesting is problematic to start with due to data snooping and any statistical analysis performed on its results is based on historical conditions that are subject to change and will change.

There are ways of using backtesting for compressing market data but at this point this is more of an art than a science. Therefore, the edge is the art part, not the science. Anyone hiring a team of PhDs to develop algos better make sure that at least one of them is an artist in the field. How to distinguish the artist in a group?  This is another edge in itself. Some funds miss excellent opportunities when they decide to hire developers with impressive academic qualifications and reject the true artists in the field. However, they should understand that discovering a proper compression method for the markets is little correlated to academic qualifications, or maybe in some case, even anti-correlated.

Technical and quantitative analysis of major stock indexes and ETFs are included in our Weekly Premium Report. Market signals for position traders are offered by our premium Market Signals service