Note: A free version of DLPAL S is available for download here.

Deep Learning Price Action Lab (DLPAL) identifies strategies in historical price data that fulfill user-defined performance statistics and risk/reward parameters. The program uses primitive attributes of price action, and specifically the open, high, low and close, to extract features types in an unsupervised learning mode based on general feature clusters. Then, the program uses the extracted features in supervised learning mode to identify strategies and systems of strategies that fulfill the user objectives. This procedure is outlined below: 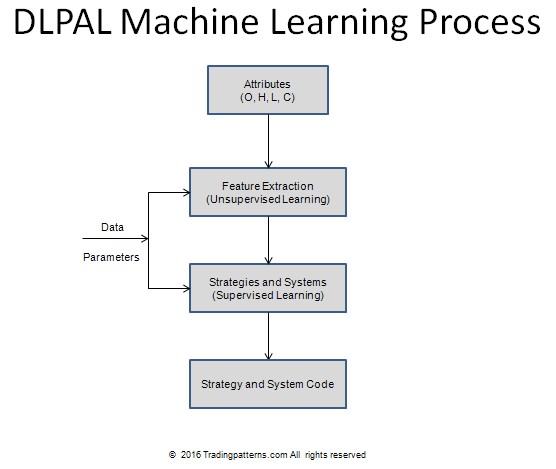 DLPAL is used to search for strategies in historical data of any timeframe. The strategies can be grouped into systems. The program can generate strategy and system code for a number of popular trading platforms. For the daily timeframe, the system tracking module of the program can be used to monitor signal generation of the strategies and systems going forward in time and as new data are available. DLPAL is  a meta-system that discovers trading systems.

DLPAL S was based on DLPAL that in turn was based on a program originally developed by Michael Harris in 2010. The most important changes in DLPAL were an optimization of the deep learning algorithm, the addition of a progress monitor that can warn the user if program execution must be aborted, among other things and a change in terminology to comply with advances in quantitative trading and machine learning. DLPAL S is a reduced version of DLPAL that allows generating unlimited strategies based on parameter-less price action features, also called price patterns in technical analysis.

– Added option to sort by win rate P in Portfolio backtest
– Test Files checks for files with invalid delimiters and lists only files with zero values
– Added option to abort and save results of search up to that pont. Program must be closed and then Open Last must be used to recover results.